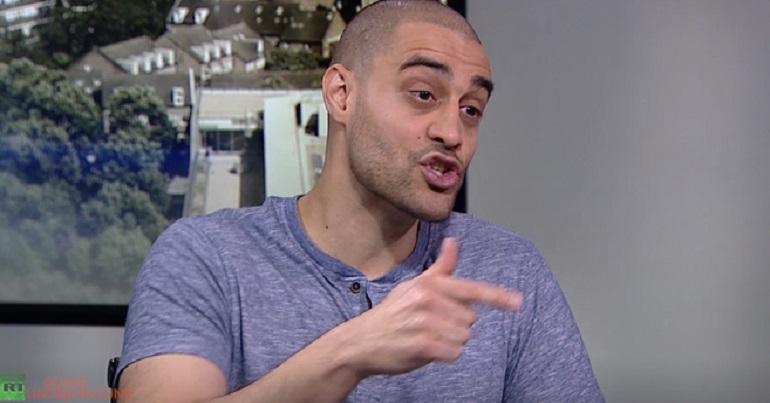 People are standing in solidarity with rapper Lowkey after he became the latest target for a pro-Israeli group. We Believe in Israel is trying to get the performer banned from Spotify.

But it isn’t going well for the pro-Zionist group, because people are showing they will not be silenced in their support for Lowkey and the Palestinian struggle.

Lowkey is a passionate and eloquent defender of Palestinian rights, and is well versed in the history of the region. This video shows him speaking at the Oxford Union in 2019:

“Let’s take a second to stop and rewind”

Spoken word artist Potent Whisper released a video about what’s happening with Lowkey. He sums up the situation:

This group of people are British based lobbyists. They use their influence to support Israel. Lowkey is a rapper who talks about the wrongs they do. He isn’t scared to speak about the things they won’t put on the news. Now they want to get revenge because he gets a lot of views. They want to lobby Spotify to try and get his songs removed.

Israel drops bombs on streets but wants to call his songs extreme. I mean, I guess in a way you can kind of see why. Like if you were them, you’d be extremely worried. The people were exposing your killing of civilians – that’s why you spend so much on the MPs you lobby, so you can try legitimising killing Palestinians.

And as he asserts:

But ultimately what it comes down to is this: if they’re alleging that his music is violent, that defending Palestine is hateful incitement, they should have to prove it facts before they can remove his tracks. If they can’t, then it proves they just want him silenced.

Across Twitter, people have expressed their solidarity with Lowkey. Declassified’s Matt Kennard tweeted:

The apartheid regime’s counter-measures are increasingly desperate. They know the game is up.

Solidarity with @Lowkey0nline who's facing sustained attacks by Israeli lobby groups who are trying to get his music cancelled on Spotify. Keep spitting the truth, brother. #LongLivePalestine https://t.co/vD5moeQ8KG

I follow @Lowkey0nline on @Spotify – maybe you should too!

Some folks are trying to have him removed because his art talks powerfully and frankly about the occupation of the Palestinian territories. https://t.co/ds7m4ShMgF

#Solidarity with @Lowkey0nline. His music continues to inspire thousands and thousands of people every day, awakening us to the system we live in – with his powerful lyrics and incredible talent.

Meanwhile Palestinian academic Shahd Abusalama, who recently won a massive victory after she was targeted by antisemitism smears at Sheffield Hallam University, tweeted her support:

As long as I've known @Lowkey0nline, he's been consistently singing and speaking up for antiracist issues, for freedom and justice in Palestine. Don't let the Zionists silence this brilliant asset for the movement🇵🇸! #DontSilencePalestine #InSupportOfShahd https://t.co/wCRdIn4eM8

And direct action campaign group Palestine Action highlighted the “time & dedication” Lowkey devotes to the “fight for an end to injustice”:

Lowkey rapped outside the now closed Israeli arms factory in Oldham, whilst we scaled the building. No other rapper puts in the time & dedication to fight for an end to injustice. Now it's time to reject the Israel lobby & stand with @Lowkey0nline! pic.twitter.com/Y47G1QQsOQ

We will not be silenced

Responding in Middle East Eye to threats to ban his music, Lowkey stated:

This coordinated campaign is an extension of the brutalisation of the Palestinians. Palestinians are routinely arrested by Israel for posts on social media, even children. Dareen Tatour spent almost a year in occupation jail for posting a poem to her Facebook.

Artists and musicians should never have to fear threats to their livelihood or person for the music they make. We will not be silenced on Palestine, not now, not ever.

The response on social media has shown that Lowkey is right. We will not be silenced. We will continue speaking out against the apartheid Israeli state. And we will unapologetically continue to defend the lives of Palestinian people.

In the words of Lowkey: