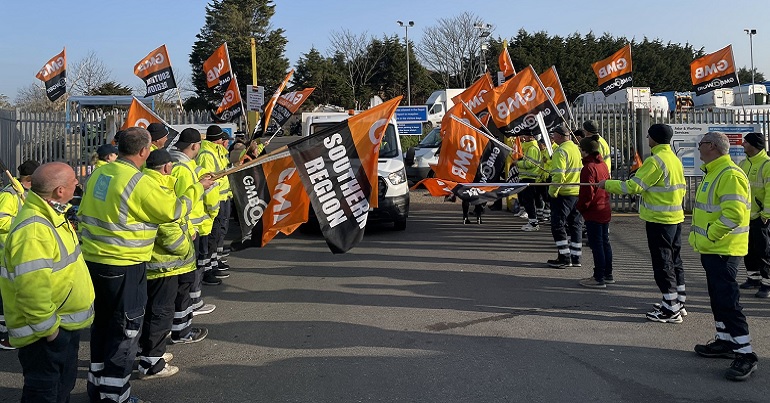 There’s a wave of strike action sweeping the UK this week. From public transport workers to hospital staff via couriers, people are taking action against bad employers. But what are these strikes all about? And are there victories workers can look to for inspiration in their fight for their rights?

Teaching strike with a victory thrown in

their employer, United Learning, not paying teachers at the correct pay band, giving them additional leadership and management responsibilities but not paying them for this with ‘Teaching & Learning Responsibility Payments’ (TLRs), workload issues, high levels of bullying and unequal treatment of staff.

Examples of the appalling treatment allegedly include United Learning denying one permanent teacher maternity pay. There’s hope for the staff, though; the NEU recently won changes for its staff at another academy trust after it and its members threatened to strike.

University strike… and a victory, too

University staff across the UK are also striking. They’ve walked out over pay, pensions, and working conditions. Since 2009, the University and College Union (UCU) says bosses have cut staff pay by 25% in real terms due to “below inflation pay offers”.

On Tuesday 22 February, bosses confirmed that staff would also typically see a 35% cut to their pensions. The UCU strike has seen over 50,000 staff at 68 unis walk out in recent weeks. Starting on 28 March, staff at 27 unis were on strike.

UCU and its members have also recently won a victory. They threatened strike action, and got Sheffield International College to improve their pay and holiday allowance.

A victory for workers at an infamous hospital

Great Ormond Street is a world-famous children’s hospital, but bosses are giving outsourced security staff an unhealthy deal. The United Voices of the World (UVW) union has been supporting them. It says the staff:

are denied the same annual leave, sick leave, and career progression as other NHS workers.

UVW calls this a “two-tier system“. But bosses are battering the striking workers. They got a court to place an injunction on the strike. This means staff could be fined or jailed for taking action outside the hospital:

But there is hope for the security staff; UVW Union and its members already won a victory at GOSH. Outsourced cleaners threatened industrial action, and managed to force GOSH to change them all onto NHS contracts.

Meanwhile, delivery couriers have been on strike too. It’s the longest-running UK gig economy one. The Independent Workers of Great Britain (IWGB) union has been supporting them. It involves people who work for Stuart Delivery, a subsidiary of DPD, which provides couriers for JustEat. In December 2021, it cut workers’ pay, slashing their delivery rates by 24%. This means couriers get a minimum of £3.40 per delivery, down from £4.50. Over at Fox’s Glacier Mint, workers are striking over fire and rehire tactics.

Again, local strikes have seen victories. Bin workers in Wiltshire just won a pay rise. An ongoing dispute in Glasgow over the city council’s pay discrimination against women appeared to see the impasse begin to be broken. And workers have called off a bin strike in Solihull after council bosses met their demands.

What many of these actions show is that workers can win against public bodies and private corporations. Of course, the key to victory is solidarity and unity – and these strikes have loads of that.

The Canary stands with these workers – and we’d ask our readers to do the same.