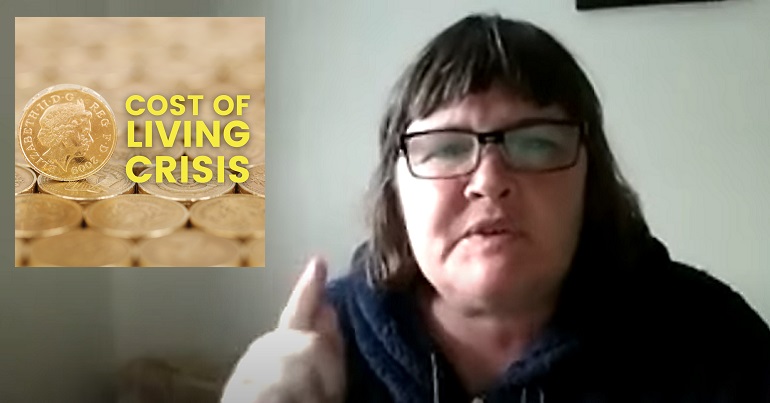 A disabled person has launched a furious response to the government. It’s over the so-called ‘cost of living crisis’. But her anger points to the fact that systemic attacks on chronically ill, disabled and poor people are a long-term issue. And it shows that actually, this is less a cost of living crisis and more of a class war.

The Spring Statement: “surviving or dying”

Paula Peters is a disability rights activist. She is a member of Disabled People Against Cuts (DPAC) and Unite Community. On Sunday 27 March she was on the online, left-wing programme Not The Andrew Marr Show. Peters used her appearance to give a heartfelt but angry plea on behalf of chronically ill, disabled, older and poor people.

Chancellor Rishi Sunak’s Spring Statement did nothing for the poorest people. In fact, he just made their lives worse.

As I previously wrote, around 10 million households are facing at least a £290 cut in real terms to their social security. This is on top of things like the benefit cap, which has caused persistent child poverty. The National Insurance threshold rise won’t do anything for chronically ill and disabled people who can’t work, unpaid carers, those on Jobseeker’s Allowance, and part-time workers who didn’t meet the threshold in the first place.

“We’ve got to work collectively”

We’ve got to work collectively. And we’ve got to support one another’s campaigns.

Currently, groups like the People’s Assembly are organising demos. There are ones happening across the country on Saturday 2 April:

One week til we will be out across 20+ demonstrations across the U.K!

Here’s a first drop of speakers for the London demonstration in Downing Street from 2pm!

You can find all the details here.

But there are two problems with this. Firstly our resistance has to go beyond occasional marches to looking at how we engage in practical and effective solidarity on a daily basis. And secondly, government persecution of chronically ill and disabled people isn’t new.

Where’s the support been?

I’m fucking angry. I’ve had fucking enough. And I’m fucking pissed off to see disabled people die… when we have action, there’s not enough support. That’s got to fucking change. Solidarity isn’t a word. It’s something we fucking do.

Groups like DPAC have been fighting government attacks on chronically ill and disabled people for years. Yet often they have not received much support. This is despite bodies like the UN saying that the UK government had committed “grave” and “systematic” violations of disabled people’s human rights. It’s despite tens of thousands of claimants dying on the Department for Work and Pensions’ (DWP’s) watch, when it told them they were fit for work or ready to start looking or preparing for work.

Even so, here we are. People are calling protests about a ‘cost of living crisis’ that for chronically ill, disabled and poor people isn’t new. Because successive governments have either frozen or cut their social security for years. So, as Peters said:

The government knows this. So, let’s start calling the cost of living crisis what it actually is: class war, pure and simple.

Warning: contains swearing
Paula Peters tells it as it is for millions of disabled people struggling with the cost of living – and no support from the government or Labour. pic.twitter.com/U3qdvV6ceI