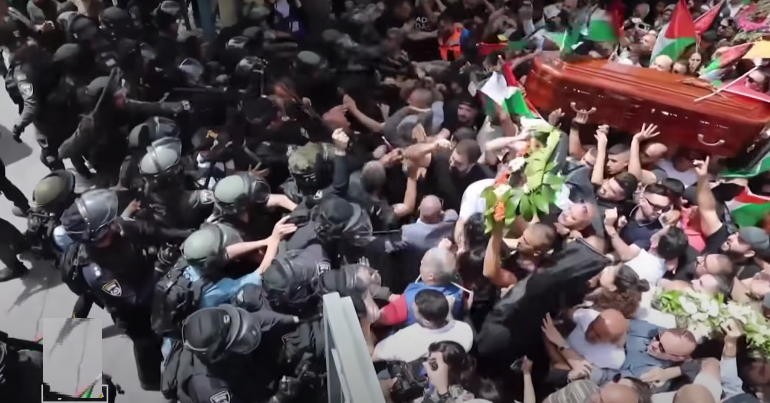 One of the most unbelievable things I’ve ever seen! Even in death Shireen Abu Akleh is attacked by Israeli forces. Police attack pallbearers carrying the coffin of a journalist who was shot in the face by Israeli soldiers. Why? Because the coffin is draped in the Palestinian flag pic.twitter.com/zr4kNbQLe3

VICE journalist Hind Hassan pointed out how many Palestinian journalists have been killed by Israeli forces:

Interesting fact(s):The international Federation of Journalists says 46 Palestinian journalists have been killed by Israeli forces since 2000. Not a single Israeli has ever been convicted by an Israeli /military court of a crime. pic.twitter.com/mpMD9PW5KW

And rapper Lowkey shared the names of other Palestinian journalists Israeli forces have killed:

Shooting a journalist just under the ear – an area not protected by the helmet and flak jacket she was wearing – is intentional. Soldier had his orders. The army and government knew who Shireen Abu Akleh is.

Predictably, just as Shireen’s killing was spun by mainstream media, so too was her funeral.

Her coffin was “jostled”

Israeli occupation forces attacked the funeral procession, beat mourners, caused her casket to fall to the ground and the BBC tweets one of the worst obfuscations of Israeli violence yet. pic.twitter.com/tW61Bj9oNE

And CBS News brought up the fabled ‘clashes’ again:

@CBSNews says Shireen Abu Akleh’s casket clashed with Israeli police. Palestinian humanity is so marginalized that American media would rather disparage the corpse of their fellow slain journalist than afford Palestinians even the most basic of dignity. It’s a fucking funeral. https://t.co/lPjdAMjRkR

The willingness of so many media outlets to use such weak language only shows how fundamentally opposed they are to the existence of Palestinians. Israeli forces killed Shireen Abu Akleh. She spent her life reporting on those same forces. They attacked her funeral and stopped mourners from grieving the loss of a beloved reporter.

Middle East Eye shared an article which argued that misreporting is free propaganda:

As Middle East Eye argued, the silence from fellow journalists is directly propping up an apartheid state.

Al Jazeera producer Laila Al-Arian pointed to this same silence from many journalists:

Hi fellow journalists, your silence on the killing of Al Jazeera’s Shireen Abu Akleh is telling.

Feeling really demoralized about the lack of outrage and support following Shireen Abu Akleh’s killing from our western journalist colleagues.

Meanwhile AJ+ presenter and producer Dena Takruri pointed to the dehumanisation of Palestinians:

I'm deeply disturbed by the lack of outrage from Western journalists & the US government re: Israel's killing of Shireen Abu Akleh.

It reinforces what we as Palestinians have long felt: that there is little regard for our humanity.

The way so many media outlets have dismissed EYEWITNESS ACCOUNTS of how Shireen got killed reveals how Palestinians aren't seen or trusted as reliable narrators of their own experiences. But Israel's army is trusted/given equal weight.
There's some deeply engrained racism there

And one of Shireen’s friends and co-workers, foreign policy expert Rula Jebreal, shared her grief:

I’m shattered by the news of the assassination of my friend & colleague Shireen Abu Akleh, a veteran journalist. @IDF shot her in the head while she reporting in Jenin… she was wearing a press vest.
This was an execution; a heinous crime & an attack on the freedom of the press. pic.twitter.com/DwhzxLarQu

However, that grief – as Palestinians know all too well – is conditional. The inaccurate reporting from many outlets reflects the fact that Palestinians are abandoned both in life and in death. Palestinians cannot grieve the same as everybody else. Palestinian deaths cannot be mourned without interference.

Shireen Abu Akleh isn’t just an Al Jazeera journalist, she’s also a Palestinian, born in Jerusalem. She was killed by the very forces that occupy and have stolen the homeland she dedicated her life to reporting on. May she rest in peace & may we uplift her legacy.

So we must grieve openly and hold Shireen in our hearts. Her killing is indescribably painful, as is the attack on her funeral. Her family and loved ones must feel the outpourings of love and solidarity from the global community.