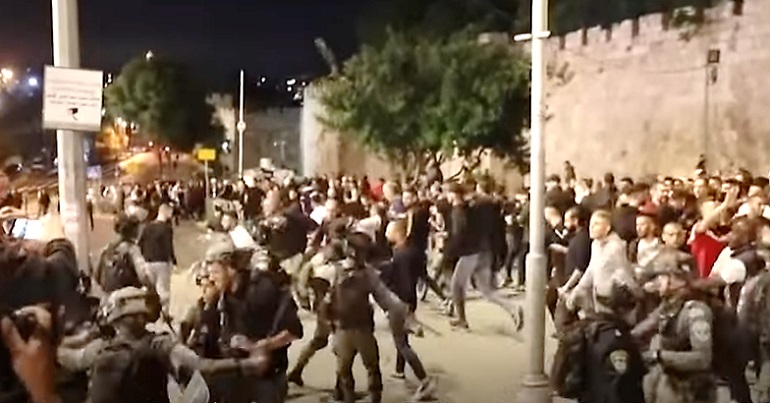 The occupying Israeli forces have attacked another Palestinian funeral, just days after violating the funeral of a journalist they killed.

Israeli forces killed Al Jazeera journalist Shireen Abu Akleh on 11 May. Then, on 13 May, they attacked mourners at her funeral. As The Canary previously reported:

Shooting a journalist just under the ear – an area not protected by the helmet and flak jacket she was wearing – is intentional. Soldier had his orders. The army and government knew who Shireen Abu Akleh is.

Now, Israeli forces have attacked another funeral. This time, it was that of Walid Al-Sharif. They shot him during their raid on the Al Aqsa mosque in April. As Al Manar News reported, Al-Sharif died on 14 May:

he fell into a coma on April 24 and was in a critical condition since.

Al-Sharif’s head or neck was reportedly targeted by a sponge-tipped Israeli bullet, according to his family and witnesses.

At the time of his injury, Israeli occupation forces raided the Al-Aqsa Mosque compound, and Al-Sharif was one of 57 Palestinians injured during the brutal attacks on worshippers.

Then, Israeli forces attacked his funeral on 16 May:

Israeli police have attacked the funeral procession of Walid Al-Sharif, a 21-year-old Palestinian who was shot in the head last month by Israeli police who had invaded Al-Aqsa during Ramadan.

This is the second funeral attacked by Israeli police in the last few days. pic.twitter.com/bmIXYmrhLF

Reports suggested that Israeli forces injured over 80 Palestinians, as well as setting up roadblocks and preventing access to Al Aqsa. They attacked the Red Crescent ambulance carrying Al-Sharif, and left one of his relatives in a critical condition:

Nader Al-Sharif, injured by a rubber bullet in the eye, and his condition is critical, he has been referred for treatment at “Shaare Zedek” Hospital, and the forces are now storming his treatment room and forcing his family to leave it
Injured during Walid Al-Sharif's funeral pic.twitter.com/DKDAWoS925

Predictably, the corporate media either failed to report the Israeli violence, or they dumbed it down. The Jerusalem Post ran with the usual “clashes” trope:

Clashes erupted on Temple Mount during the funeral of Walid al-Sharif, where hundreds of Palestinians are reportedly throwing stones and bottles toward Israeli forces while flying Palestinian flags.#Israel | #Palestinians https://t.co/YSRWvxBeG4

And France 24 ran with the headline:

Dozens hurt in clashes at Palestinian funeral in Jerusalem

Who hurt the “dozens”? If you were reading France 24‘s headline you’d be none the wiser that it was Israeli forces.

Palestinians are abandoned both in life and in death. Palestinians cannot grieve the same as everybody else. Palestinian deaths cannot be mourned without interference.

The Israeli forces’ near-identical actions at Al-Sharif’s funeral show that the state is continuing to act out its apartheid with impunity.