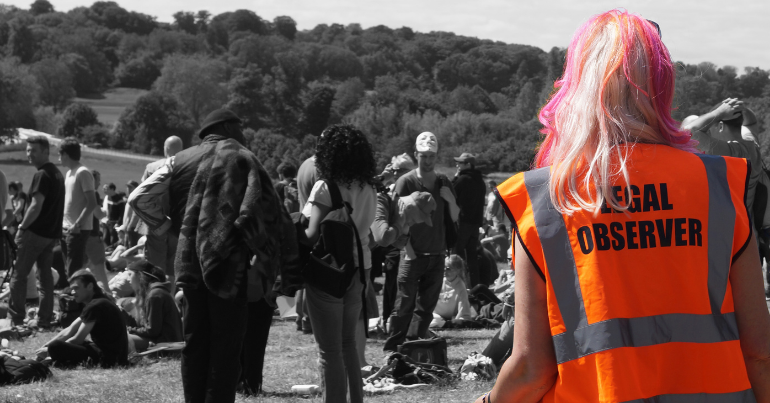 When a section 60 order is in place, officers have the right to search people without suspicion in an area where they expect serious violence. While home secretary, Theresa May imposed restrictions on its use due to concerns they were used discriminatorily.

In year ending March 2021, people from a Black or Black British background people were seven times more likely to be stopped and searched than those from a White ethnic background.

And, as The Canary’s Sophia Purdy-Moore argues:

Stop and search, and policing in general, does not prevent crime. It doesn’t protect communities, and it only serves to traumatise and criminalise the most marginalised people in society.

Even further expansion of search powers

If this wasn’t bad enough, the government has recently introduced a new bill that will further expand the reach of section 60 searches to protests. This will give the police the power to use suspicionless stop and search powers if they think protest-related offences are going to occur. It is anticipated that, like the original section 60 powers, this will be used disproportionately against marginalised communities.

Police do not keep people safe. If anything, the police cause harm to individuals and communities. But there are grassroots groups that monitor the police and help to hold them to account. Organisations like Bristol CopWatch provide examples of how we can use community monitoring to challenge the way we are policed.

Meanwhile, at protests, legal observers monitor the police. Now, an important new report shows the importance of these volunteers. Legal observers are even more vital given the government’s plans to further stifle dissent in any way it can.

The Article 11 Trust, alongside the Network for Police Monitoring (Netpol), have released a new report called Protecting Protest: Police Treatment of Legal Observers. According to the report, legal observers (LOs) are volunteers who:

are independent and don’t participate in protest activity such as chanting or carrying placards. They monitor police operations and conduct, compiling independent notes as evidence of incidents including arrests, and distribute legal advice to protesters.

So why are legal observers important for the right to protest? Legal observers are trained to independently monitor police behaviour at protests, and to give support to protestors. In the current climate, policing is becoming more aggressive. This includes restrictions on protestors, increased police powers that are proven to target minorities, and the use of excessive force.

The people who participated in the research had a cumulative experience of 135 years and 8 months as legal observers. The report found that:

78% of LOs indicated experiencing police attempting to restrict or obstruct the activity or effectiveness of LOs, somewhat often to extremely often.

LO 19 explained how: “The presence of mainstream media cameras is the number one thing that keeps you safe at a protest. As soon as nobody is watching police violence will follow”.

It’s important to note that LOs support people who are arrested:

This involves observing and taking detailed contemporaneous notes of arrests in case of, for example, excessive use of force or police misconduct, and reporting the arrest to a back office team that can follow up with the arrestee. Evidence from LOs can be used in criminal or civil proceedings.

The use of phone cameras has been vital in holding police accountable. Of course, not everything can be filmed, and this is precisely why LOs are so important. LOs are able to empower protesters and hold police accountable through their work.

This vital role has more general applications too. Under section 60, police are able to stop and search people at will. Whilst LOs are trained volunteers who observe during protests, it is also good practice for passers-by to take note of police behaviour. CopWatch groups around the country also offer training on the best ways to do this.

The report also highlighted the effectiveness of LOs.

I’ve seen it where it’s been clocked that LOs are present and it’s changed how the police have decided to police. You can see it’s deterred them. You can see they are about to do something and [when] it’s pointed out they stop” (LO 1).

As the Article 11 Trust said:

Article 11 rights are the right to peaceful assembly and the freedom of association with others. It includes both the right to form and to join trade unions, and the right to gather for peaceful protest.

In effect, LOs make protests safer for the people attending them. They observe and note police behaviour, and act as deterrents. LOs are supposed to be visible and able to do their work freely.

From Freedom of Information requests to police forces around Britain, the report concluded:

Forces around the country seemed to demonstrate varying levels of awareness and perceptions of LOs.

This is a problem because police knowledge about LOs makes it easier for LOs to do their vital work.

In fact, some LOs shared their experiences of being discriminated against by the police. The report stated:

Class, ethnicity, height and gender were identified as particular indicators of discrimination.

I have been sexually and otherwise harassed multiple times by police officers, who seem to particularly enjoy doing so in front of protesters I am supporting.

I feel that the way I’m treated by police (being patronised and dismissed, told I know nothing or officers suggesting I didn’t train as an LO) is often related to my gender and age (female and young). I have often experienced very different treatment by Police compared to male LOs who I’ve had equal training and experience to.

I’ve found police behaviour sometimes but not always varies according to how they perceive my gender. I’ve gotten in the habit of dressing very androgynously while LOing (in part to protect my identity), and especially with a facemask and hat on have found that Police are less likely to allow me to move through police lines and more likely to obstruct me if I’m dressed ambiguously.

From the experiences of these LOs, it is very clear that they are often restricted from doing their jobs and observing police actions because police discriminate against them.

The treatment of protest by police as a public order threat to be managed, leaves Article 11 Rights at risk.

Article 11 rights protect the basic functions of a democratic society. Because legal observers are not uniformly or officially recognised, it’s difficult to monitor police attitudes and compliance. This is also why this report from Netpol and the Article 11 Trust is invaluable.

LOs are not protestors, and police forces must recognise this. As the report says:

the best way to protect Article 11 Rights to freedom of Assembly and Association is for Police forces to have a proper benchmark – like the Charter for Freedom of Assembly Rights – that sets out what a Human Rights based approach to protest policing should look like in practice.

We all need to hold the police to account

This independent monitoring is even more vital with the new protest powers in the PCSC Act and the authoritarian Public Order Bill that the government has just introduced. This bill brings together the defeated amendments from the PCSC Act and will further criminalise protest. The expansion of stop and search powers to protest-related offences is also in this bill.

In an explainer about the new bill, Netpol highlighted the concerning inclusion of Serious Disruption Prevention Orders:

Crucially – because you do not need to be convicted of an offence to be issued with one – Serious Disruption Prevention Orders actively encourage the expansion of police intelligence gathering on a range of social and political movements.

This is just one of a number of areas for concern for protestors and anyone who dissents from government action. The expansion of stop and search powers is part of a wider move from the government to continue to target, spy on, and punish civil disobedience, which is the cornerstone of any democracy.

The abuse of protestors and arrestees has been widely documented. Alongside this, what’s also documented is that success that can come from collective action and cop watching. Whether it’s communities coming together to stop immigration raids or to de-arrest people, or the scrutiny of LOs, we can hold police to account.

Patel’s decision to lift restrictions and expand stop and search powers is yet another example of the government stripping away safety for protestors and, in particular, minorities who are likely to be stopped by the police. It’s also exactly why cop watching and legal observers are so very needed.

Featured image via Flickr/Tyler Merbler, resized to 770×403, via Creative Commons by 2.0