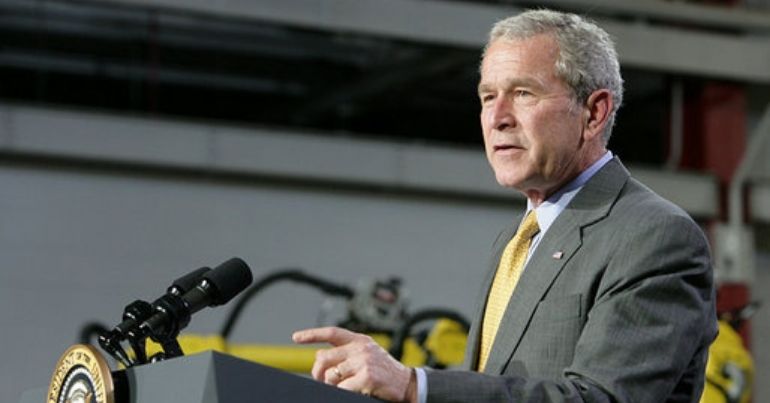 Nineteen years on, the Iraq War has become a parlour joke for rich Western audiences, a parlour joke cracked by no less than the architect of Iraq’s destruction, George W. Bush. That the ex-president was speaking at an event at a venue named after himself, the George W. Bush Presidential Centre, only adds to the crassness.

Bush was there to discuss future elections in the US. But he was criticising the Russian invasion of Ukraine when he said:

…the decision of one man to launch a wholly unjustified and brutal invasion of Iraq. I mean of Ukraine.

When he laughed it off, audience members laughed with him. Bush blamed his age – he is 75 – for the error.

Former President George W. Bush: “The decision of one man to launch a wholly unjustified and brutal invasion of Iraq. I mean of Ukraine.” pic.twitter.com/UMwNMwMnmX

Media Lens said Bush’s error showed up the mendacity and hypocrisy of Western media as a whole:

In a single moment of unconscious dissent, the hypocrisy and mendacity of the entire Western propaganda system is exposed.

Bush on 'the decision of one man to launch a wholly unjustified and brutal invasion of Iraq… I mean Ukraine.'https://t.co/h1oIootAWJ

Bush also accused Putin of rigging elections. However, it was quickly pointed out that similar accusations have been made of Bush himself, regarding his 2000 election:

George W. Bush, who stole the 2000 election, decries Russian elections for being "rigged," then goes on to denounce Vladimir Putin for "launch[ing] a wholly unjustified invasion of Iraq — I mean of Ukraine."pic.twitter.com/ZnTIwQzQQo

Another commenter had to explain to her father that Bush, who is famous for his blunders, somehow got into a top US university:

i had to explain why george w. bush saying "iraq" instead of "ukraine" was funny/horrifying – then my father said, "wait, how did george bush get into yale?"
my father has just discovered the meritocracy is a lie.

One journalist made it very clear that he felt there was little difference between what Bush did in Iraq and what Putin has done in Ukraine:

What George W. Bush did to Iraq was every bit as evil as what Vladimir Putin is doing to Ukraine. We have zero moral high ground. Zero.

Meanwhile, another said that in terms of sheer death toll in the first three months, Bush’s Iraq war was far more bloody than the Ukraine invasion:

And one Twitter user captured the essence of the problem when he said that war criminality is “ok when we do it”:

George W. Bush openly admitting that he views the invasion of Iraq as on par with Russia's invasion of Ukraine reveals what we've always known about US foreign policy: "it's ok when we do it." Nice to hear someone finally just admit it.

Bush’s latest error comes at a key moment in terms of accountability. In recent days, the first trials of Russian troops for war crimes in Ukraine have gotten underway. The first accused soldier pleaded guilty in a Kyiv court on Wednesday.

Closer to home, an amnesty on crimes by British troops during the Troubles in Ireland has become law.

If there was ever any doubt about a moral double standard over war crimes, it surely must now be dispelled. As it stands, British and American brutality can be legislated away or simply laughed off, whilst at the same time war crime trials in Ukraine are treated with grave seriousness.

The truth is, all war crime allegations must be given the same gravity, and the law should not respect wealth, fame, or power.