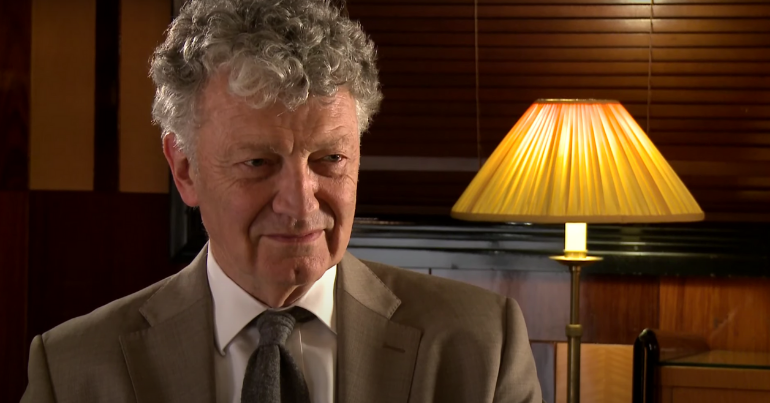 The government-commissioned Prevent review led by William Shawcross has been partially leaked. In extracts seen by The Guardian:

the review claims there has been a “double standard” approach to tackling different forms of extremism, with individuals targeted for expressing mainstream rightwing views because the definition of neo-nazism has expanded too widely, while the focus on Islamist extremism has been too narrow.

For anyone who has paid any attention at all to the last 20 years of Islamophobic policies, this claim is the usual bullshit from an Islamophobic review. As The Canary covered last year, the Shawcross review of Prevent has been boycotted by over 550 organisations and individuals. It’s no surprise to anyone that the contents of this leak leave much to be desired.

In fact, when he was the director of the neoconservative Henry Jackson Society, Shawcross said:

Europe and Islam is one of the greatest, most terrifying problems of our future. I think all European countries have vastly, very quickly growing Islamic populations.

Responses to the content of the leak came from a number of people. Co-author of Race to the Bottom Ilyas Nagdee shared:

Truly stomach churning that leaked extracts from the Shawcross Review negate the horror of rightwing attacks & suggest its been overstated before the funerals of victims of Buffalo take place.https://t.co/QUeBAzzY1V

Here, Nagdee is referring to the self-identified white nationalist and fascist who shot and killed 10 Black people in a predominantly Black neighbourhood.

The Network for Police Monitoring pointed out that the review seemed to be going exactly as expected:

Leaked Prevent review reveals William Shawcross is precisely what his anti-Muslim statements and directorship of the neoconservative Henry Jackson Society suggested he is. Exactly what this government wanted https://t.co/OuD7t0um9f

Moazzam Begg, who was tortured in Guantanamo Bay, looked at Shawcross’ own credentials:

So far, so predictable. Muslims in Britain have always been treated with suspicion and this review is doing exactly what we all thought it would. However, there’s more to this leak.

As The Guardian also reported:

Let’s get into it.

The idea that a “renewed” focus is needed on “Islamist extremism” is ludicrous. How do you renew something which has been a cornerstone of British politics for at least the last 20 years?

An article from over 10 years ago by Mehdi Hasan explained:

How the fear of being criminalised has forced Muslims into silence

Not much has changed since then. Muslim communities continue to be surveilled, criminalised, and targeted. Since 9/11, there has been a concerted effort from numerous governments to disproportionately target Muslims. The very idea that yet more focus is needed on “Islamist extremism” is exactly the kind of thinking you’d expect from a former director of the Henry Jackson Society.

Unsurprising that the man who once called Islam 'one of the greatest, most terrifying problems of our future' now says Prevent should focus even more on Muslims – who are already 8 times more likely to be referred through healthcare than non-Muslims. https://t.co/2cxq1desdG

Medact spoke to The Canary last year for an investigation into vulnerability support hubs. Patients are referred to these hubs if their medical team believes they are “at risk of being a terrorist in the future.”

At the time, Hilary Aked – Medact’s research manager – told us:

These hubs represent a wider blurring of boundaries between health and security. As the Prevent review leak states:

individuals have been referred to Prevent, the government’s anti-extremism programme, to access mental health support even when there is no evidence of extremism.

As is so often the case with discussions of racism, when Muslims have spoken out in defence of fellow Muslims being targeted by Prevent, those criticisms are dismissed. Just last month, a right-wing think tank published a report that singled out the fact that:

the groups opposing Prevent have tended to criticise pretty much any counter-terrorism policy.

David Cameron described the report as having:

lifted the lid on how a vocal minority is attempting to undermine efforts to prevent such radicalisation. We can’t let the Prevent strategy be defeated by extremists.

What exactly are Muslims supposed to do here? If we can’t show dissent, or if any dissent is not taken seriously, how can historically racist policies like Prevent be opposed? It’s almost as though they want us to take this lying down.

But even further than that, the Home Office won’t even be open about what they’re up to. The Prevent leak also says:

some Prevent-funded groups have promoted extremist narratives including support for the Taliban.

It would be very helpful if information about which groups are funded by Prevent, how much money they get, and how they operate was publicly available.

When The Canary sent off a number of Freedom of Information (FOI) requests about how many premises were raided as part of counter-terror initiatives, we got nothing back. When The Canary used another FOI request to find out more details about Prevent funding, we found that around £44m per year was sunk into Prevent – with a lack of information about where exactly this was going. In this case we specifically asked which groups were receiving Prevent funding and we were told they couldn’t tell us anything because of “security concerns.” When The Canary reported on an FOI request sent off by Prevent Watch, not only did we see information on the sheer amount of money involved in Prevent, we also saw the range of people who were targeted by Prevent:

How questioning any of these people kept anyone safe remains unclear.

It’s entirely unsurprising that Prevent appear to have funded groups that support the Taliban. If they’re not going to be transparent about who they fund, how, and why, how can they be held to account?

Muslims have spent a long time warning that Shawcross’ review was always going to be a whitewash. We’ve spent even longer warning about the horrifyingly racist and Islamophobic policies of the past 20 years. We’ve also had to warn about the rising threat of what the Home Office call ‘extreme right-wing‘ terrorism.

Those warnings are going unheeded because it doesn’t matter which government has been in power over the past 20 years – institutions are always willing and able to surveil and criminalise Muslims. They then repeat the same cycle of criticising Muslims for calling out Islamophobia, all whilst continuing their racist onslaughts.

Shawcross’ report was always going to come to conclusions that are unrelated to reality. These conclusions are entirely embedded in upholding white supremacy, no matter how you slice it.