DWP: new police-style powers are a step towards corporate fascism

The Department for Work and Pensions (DWP) will have new powers like the police. The government will allow it to arrest claimants and issue fines over alleged fraud. But crucially, the DWP won’t even have to take people to court to issue fines. This new agenda from the government can only be described as corporate fascism – and ministers aren’t even trying to hide it, either.

The DWP: powers of the police

On Thursday 19 May the government announced its new “Fighting Fraud In The Welfare System” plan. DWP boss Therese Coffey and minister Jacob Rees-Mogg are behind it. The DWP has made no secret of just what the plan involves. It clearly stated on its website that it will give social security staff the power to:

Coffey dressed the announcement up with far-right populist language. Her intention is clearly to sell it to the public under the guise of ‘benefit cheats cost you, the hardworking taxpayer, money’. She said:

The welfare system is there to help the most vulnerable. It is not a cash machine for callous criminals and it’s vital that the government ensures money is well spent.

Fraud is an ever-present threat and before the pandemic, our efforts brought fraud and error close to record lows… we can keep up with fraud in today’s digital age and prevent, detect and deter those who would try to cheat the system.

“Criminals”; “money-well spent” and “cheat” could almost be from a Daily Mail front page. However, the reality behind the DWP’s claims over fraud doesn’t match its rhetoric.

The Mirror reported that:

benefit overpayments due to fraud and error rocketed to a record £8.3bn in 2020/21. But this includes errors by the department or claimants – not just deliberate fraud.

Sadly, the Mirror couldn’t be bothered to actually look into the figures. If it had, it would have found that the £8.3bn figure is still a tiny amount of the DWP’s overall expenditure.

But crucially, it seems much of the fraud may not be from actual claimants.

As ITV News reported, in May 2020 the DWP “prevented” £1.9bn of fraud by “organised criminals”. The DWP’s own data shows that this involved 152,000 claims. This has nothing to do with claimants as it was, in the DWP’s own words:

fraud risks from organised crime groups [where the DWP was] detecting and shutting down systematic attacks.

Moreover, all the other data is not fully evidence-based. For example, the DWP’s own methodology organises fraud into various categories. It states that:

Any Fraud that is Causal Link (Low Suspicion) has been recategorised to a new category of “Failure to provide evidence/fully engage in the process”. Cases with an error in this new category have forgone their full benefit entitlement rather than engage in the benefit review process. We therefore make the assumption that the claim was fraudulent, even though the reason for their non-engagement is not clear.

So, the DWP assumes this category is fraud  – without any evidence to back it up. Its own figures show that this accounted for over half a billion pounds in 2020/21: 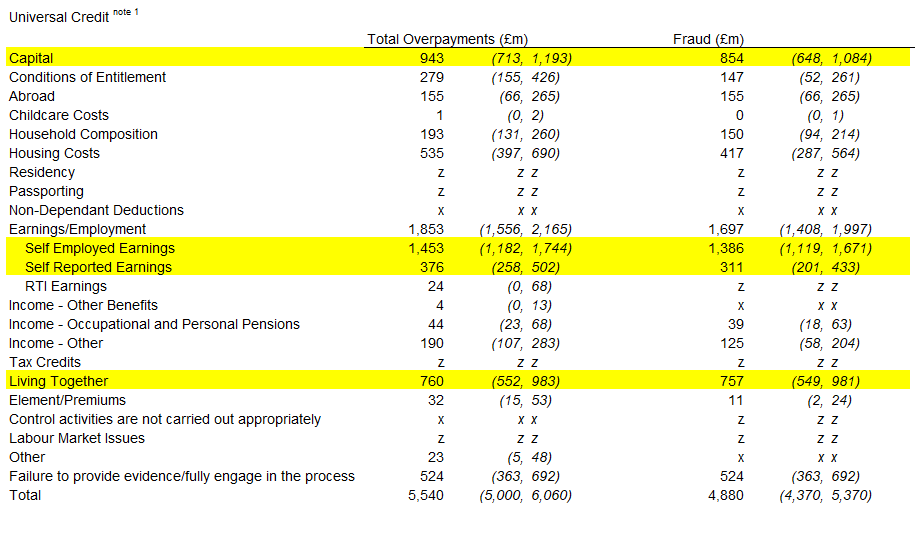 Then, you have “high suspicion” causal link cases. The DWP defines these as where:

So again, the DWP does not have evidence of fraud. It’s working around the idea that the claimant has, in its eyes, done something suspicious. In terms of figures, the DWP would include things like “living together” and “housing costs” under so-called change of circumstances – and people terminating claims could be for any reason. The point being there is potentially more billions in alleged fraud that doesn’t actually happen.

So, much of the £8.3bn the DWP promotes as fraud (and that the media dutifully laps up) is just based on assumptions and guesswork. In 2020/21, 152,000 claims the DWP valued at £1.9bn were not even real claimants. Yet the government is using this as an excuse to push-through the most authoritarian powers the DWP will have ever had.

As The Canary previously wrote, corporate fascism is:

a form of oppressive regime that removes civil liberties while handing corporations huge wealth from the public purse as well as giving them power and control over all of us.

the concentration of power in the hands of a few people – where a government has power over the public, does what it wants, removes people’s basic freedoms and fails to act in the best interests of the majority.

As shown with new laws like the Police, Crime, Sentencing and Courts Bill and the Nationality and Borders Bill, the UK government is an increasingly authoritarian, corporate fascist one. The DWP’s new powers to effectively police claimants are another example of this.

When a government pushes through new, highly regressive rules that will oppress a whole section of society – and it does it off the back of ideology not evidence – it can only be called corporate fascism. We must resist the DWP’s authoritarian new powers by any means possible.