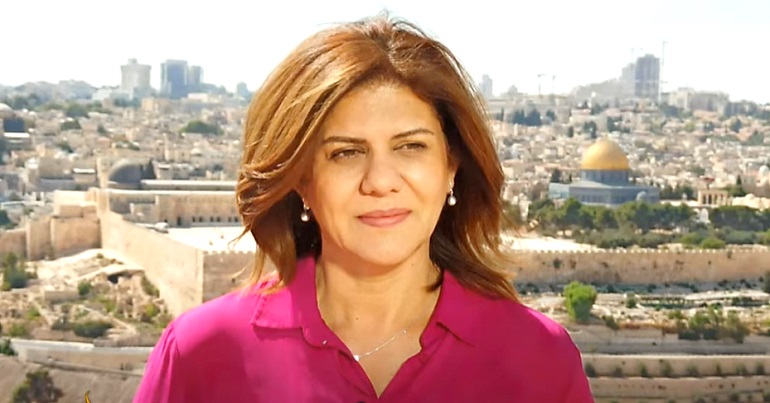 Israeli forces have killed an Al Jazeera journalist in the occupied West Bank. They shot Shireen Abu Akleh in the head while she was reporting on a raid they were carrying out. Already, the corporate media has absolved Israeli forces of responsibility for her killing.

Al Jazeera shared the testimony of a journalist who was with Abu Akleh:

🧵: Don’t waste your time reading western/Israeli news headlines about what happened to Shireen Abu Akleh. Hear it firsthand from the Palestinian journalists who were with her and witnessed everything:pic.twitter.com/xq2JKA6d8T

At 6:30am, a vehicle carrying a group of journalists arrived at the first roundabout in Jenin refugee camp. They were there to cover an Israeli raid on the camp, and a number of Israeli snipers were stationed on rooftops… Akleh got out of the vehicle, wearing a helmet and a flak jacket clearly marked with PRESS. An Israeli sniper shot her, hitting just below her ear. She fell near a wall, and the shooting continued, hindering other journos from reaching her. Her colleague, Ali al-Samoudi, was also shot in the back. They were both transferred to Ibn Sina hospital in Jenin, and her death was announced there.

However, some Western corporate media told a different story.

For example, the Guardian ran with the headline: 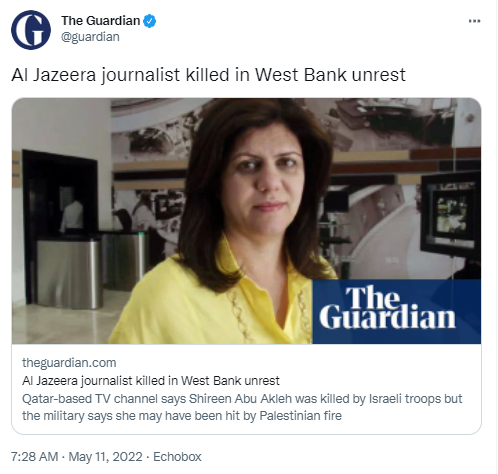 This use of the passive voice, where writers don’t name the perpetrator of the action, is common. In this case, it leaves the reader not knowing who killed Akleh. Moreover, the Guardian calling an Israeli attack on a refugee camp “unrest” plays down the state’s role even more. 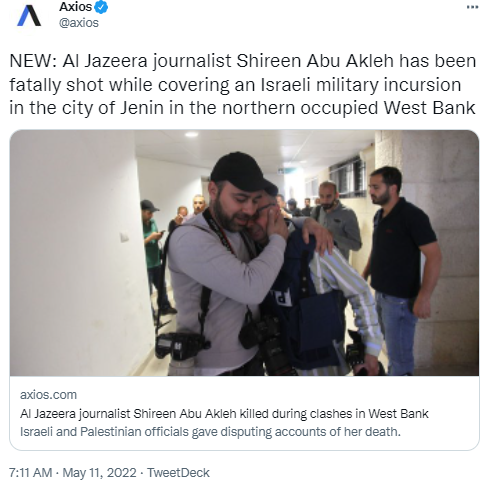 Associated Press also failed to say that Israeli forces killed Abu Akleh. It tweeted that she:

was killed by gunfire in the occupied West Bank, the Palestinian Health Ministry says. The shooting happened during an Israeli army raid in Jenin.

Al Jazeera said one of its journalists was killed in the West Bank city of Jenin during clashes between Israeli forces and Palestinian gunmen. 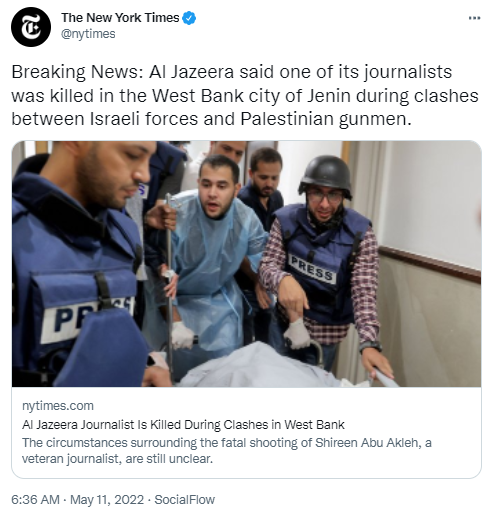 This is not what Al Jazeera said. It tweeted that Israeli forces “shot and killed” her.

Don’t believe the Israeli lies about “exchange of fire”. Don’t fall for the vacuous wording of headlines.

This was targeted killing of a journalist by Israel, something which they have done with impunity time and time again. Its standard procedure for them at this point.

This is not the first time the corporate media has covered for the Israeli state. As The Canary reported in February, some outlets did similar regarding an Amnesty report accusing Israel of being an “apartheid state”. However, the media framing this time is particularly disturbing, given that it involves the death of a journalist. When the corporate media can’t even bring themselves to defend their peers, there’s a serious and indefensible problem.