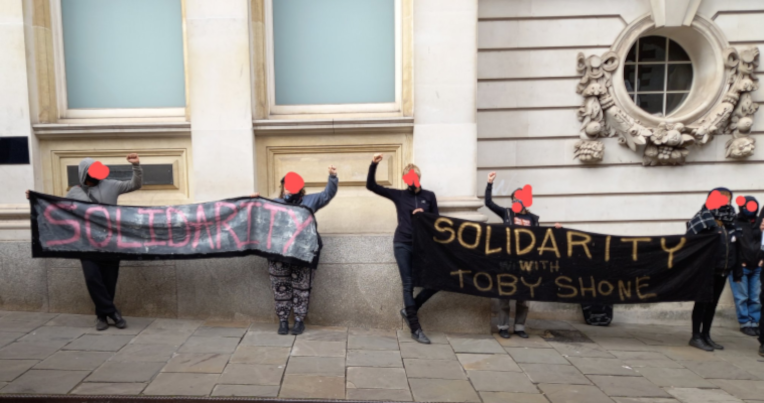 Imprisoned UK anarchist Toby Shone won a hearing last week in Bristol Crown Court. Toby’s lawyers were contesting an attempt by the head of the police’s Counter Terrorism Division to obtain a Serious Crime Prevention Order (SCPO) against him.

Toby’s arrest was part of a wider police operation known as ‘Operation Adream’.

The Canary interviewed Toby from his prison cell prior to the hearing. You can read the interview here.

Toby was originally put on trial for terrorism last year. The charges – which were never proven – related to the 325nostate.net anarchist website. The original allegations were that the 325 website – which published reports of direct action – contained material ‘that would be useful to terrorists’, and that the site fundraised for ‘terrorist activities’.

The Canary wrote at the time:

Along with the allegations mentioned above, the prosecution also claimed the 325 website was involved in distributing terrorist publications, saying that some of the material on the website fell into this category. Toby told us that the prosecution focused on a piece of writing by Italian anarchist Alfredo Bonnano called What are Anarchists?, as well as material in solidarity with two Italian anarchist prisoners. Other site content featured in the failed prosecution included letters published on 325 by imprisoned members of Greek anarchist groups Conspiracy of Cells of Fire (CCF) and Revolutionary Struggle. These groups are not illegal in the UK, but the prosecution’s case hinged on the argument that CCF were a continuation of another group called 17 November – a group initially set up in Greece in the 1970s to resist military rule. November 17 is a prohibited group in the UK.

The terrorism case against Toby fell apart in October 2021, with the Crown Prosecution Service formally offering no evidence and the court recording a ‘not guilty’ verdict. However, Toby was convicted of a comparatively minor drugs offence relating to possession of a relatively small quantity of illegal substances with intent to supply. He was sentenced to 3 years and 9 months in prison.

Despite the fact that Toby’s conviction had nothing whatsoever to do with terrorism, the Counter-Terrorism police applied for an SCPO upon his release.

SCPO orders can be imposed by courts on people who have been convicted of ‘serious’ crimes. The orders are designed to severely limit people’s freedom by – in the words of the Crown Prosecution Service (CPS) – imposing “conditions considered appropriate for the stated purpose of protecting the public from serious crime”.

The CPS lists the crimes that qualify for the imposition of an SCPO order on its website. The list includes “drug trafficking”, but the crime has to be deemed by the court to be ‘serious’ in order for an SCPO to be imposed.

The planned SCPO order would have come into effect when Toby was released from prison, and aimed to place significant restrictions on his freedom. The draconian measures included having to notify the police of where he planned to live, if he planned to stay elsewhere overnight, and if he planned to have any visitors. It would also have banned him from using Linux operating systems, VPNs, and any encrypted communications. Toby would have had to register any laptops, mobile phones, or USB storage devices with the police.

We spoke to Toby back in April, and he told The Canary how the SCPO would affect his life:

The SCPO is a method to keep me under continuous five year investigation, and de facto house arrest. It is simply a method of repression, which is intended to intimidate me, my family and my friends. To criminalise and place under surveillance those I’m close to, and to try to force me to change the way I choose to live, and with whom. It is an attempt to force me to use cashless banking and payments. To control my use of phones, USBs and computers. Stop me using encryption and stop me from using any form of open source software such as Linux. And to stop me from using crypto currencies.

Toby went further, and said that the order was a ploy designed to put him back in prison as soon as possible. He told The Canary:

The order is not really intended to be complied with. It’s been drawn up in such a way as to be impossible to submit to. The aim of the ‘Anti Terrorist Unit’ is to put me back in prison as soon as possible after I am released, and try to frighten me from speaking out about what the endgame is.

Toby Shone, you are not alone!

A demonstration was held outside Bristol Crown Court on Friday 6 May in solidarity with Toby. Supporters chanted “Toby Shone, You are not Alone!” and “Our passion for justice is stronger than your prisons”.

A statement from Toby’s supporters implies that the prosecutor was feeling confident that he was going to win. They said:

…there was a moment when it felt to everyone that it was going to go badly for our comrade. His lack of remorse and his commitment to anarchist practice, community and beliefs were cited as the risk factors necessitating continued persecution. The prosecution apparently believed they had won and Toby was quietly asked by his barrister if he would consider negotiating the terms of the Control Order in an attempt to mitigate it. Toby refused to agree to any form of negotiation, insisting that his team continue to fight the order in totality and in principle whatever the decision of the court.

Thomas Coke-Smythe was tasked with the job of making the Counter-Terrorism division’s case for the Control Order. He denied that the SCPO was being applied for on the basis of the failed terrorism charges, instead claiming that they were to prevent Toby from continuing to fund his “alternative lifestyle” by dealing drugs. He said:

[the defence case is that] the only reason the SCPO order is sought is because of the terrorism offences not proceeded with. That’s not the case. It’s clear that Mr Shone lived off-grid and relied on dealing drugs for his lifestyle, he had no legitimate source of income.

Owen Greenhall –  a defence barrister acting for Toby – argued that the order would be an unacceptable imposition on his daily life. Greenhall said that encrypted communication was a common “feature of modern life”, with everyday apps such as WhatsApp using encryption. He argued that the requirement to notify police whenever Toby used cloud storage would mean that he would have to tell the police about every time he used a new piece of cloud storage software, such as Dropbox, Microsoft Drive or Google Drive, and to provide police with the pincodes for the accounts.

Banning the use of TOR

The order would also have restricted Toby from using The Onion Router (TOR) and other VPN services, which the prosecution referred to as the “dark web”. Greenhall pointed out that there were many perfectly lawful uses for TOR. He gave the example that the BBC website had suggested that its users in Russia use TOR in order to get around the Russian state’s censorship efforts.

The prosecutor dismissed statements by Toby’s friends, who were complaining that the order would affect their lives, as “paranoia”. However, a statement by Toby’s supporters reads:

The order would also have allowed cops and court to send his family, friends or other associates to prison for up to a year if they refused to cooperate with the terms of the order such as handing over their devices for police scrutiny if Toby had used them.

Greenhall pointed out that the terms of the order would have meant that, if Toby was to live in a shared house, everyone visiting the house would have had to provide their details to the police. This would apply both to people visiting Toby, and to those visiting other residents.

The judge eventually ruled in favour of the defence case. Toby’s supporters wrote:

…after a 40 minute deliberation, High Court Judge Christopher Parker refused the order on the first count of No Necessity. He added that he was troubled by an order whose author was a Counter-Terror Unit and to whom Toby would be directly answerable, given that Toby had been found Not Guilty of terrorism charges and was serving a sentence for relatively minor drug offences. In any event, the order, he said, was draconian even for terrorist offences.

“The revolution is inevitable”

The Canary asked Kevin Blowe from the Network for Police Monitoring to comment on the result of the hearing. He said:

We welcome the court’s rejection of the vindictive efforts by counter terrorism police to try again to punish Toby Shone after the terrorism charges against him collapsed.

Their proposed Serious Crime Prevention Order would have given police wide ranging powers to indefinitely control his life on release from prison. It would have represented an extraordinary restriction on his free speech and his right to meaningfully participate in political activism

Toby left the court amid clapping and cheers from the public gallery. As he was about to be led downstairs to the cells, he said:

The revolution is inevitable

“We’ll turn up the heat”

We spoke to Toby from his prison cell in HMP Parc in Bridgend after the hearing was over. He asked us to share this statement:

Thanks to all those who came to express their solidarity and rage at Bristol Crown Court on Friday. After 15 months of solitary confinement it was the most amount of comrades seen in a long time. Your strength and warmth stays in the heart.

This was a major defeat and humiliation for the anti-terrorist prosecutors and police, but we should not rest easy. A state methodology has been put together which they will still use to attack others in the anarchist space when they can. Operation Adream is also still not closed and so we should remain ready. There are many lessons to be learned here and more complete analysis will come out in time.

I am due for release in late December, and will be on license until November 2024. The prison Offender Management Unit confirmed to me that the Anti-Terrorist unit still intend to keep me under surveillance after my release. I’m sure they’ll try to take revenge, but with the love and complicity of all the comrades we’ll turn up the heat.

Liberty and discord are one and the same.

Always unrepentant and always anarchist, nothing is over. Everything continues.