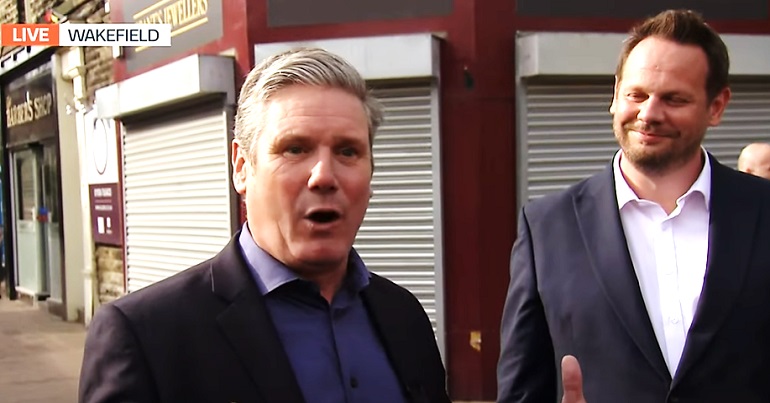 Labour has won the Wakefield by-election, taking the seat from the Tories. But the data shows this isn’t any kind of resounding victory. Yet if you believed the party and the pundits then the result was ‘beyond their wildest dreams’.

As Britain Elects noted, Labour won Wakefield with 47.9% of the vote:

Across the media and on Twitter, Labour MPs are oozing positivity about the result. For example, shadow transport secretary Louise Haigh told BBC Breakfast:

We were obviously hoping for victory last night in Wakefield, but the result went beyond our wildest dreams. It was a higher turnout than we expected, a much bigger swing, and a much bigger vote share as well.

Haigh must have pretty tame dreams if the Wakefield result was beyond her “wildest” ones. Because actually, as pollster John Curtice noted, what actually happened was the Tories’ vote share collapsed more than Labour’s share rose. Never mind, though – because Keir Starmer branded the result as:

A historic victory — this city deserved a fresh start.

“Historic” is debatable. Because given the scandals surrounding Boris Johnson – Labour should have hammered the Tories. Plus, based on the size of the electorate in 2019 and the turnout – in reality only around 19% of the voting public voted for Labour.

Ultimately the Wakefield by-election is useless as a public opinion gauge. Because the turnout was just 39.5% – way down on the general election. This is much like 2021’s Batley and Spen by-election, where Labour spun-it as some sort of victory when turnout was less than 50%. Both constituencies have higher rates of poverty than other parts of England. Hartlepool was a similar story: poverty met a by-election and the result was a turnout of less than 50%.

Our systems of politics and democracy, and their proponents, disenfranchise the poorest people. So much so, that they rightly feel voting will change nothing. The difference in a richer area, like Tiverton and Honiton, is clear. Its by-election saw a 52% turnout and the Lib Dems got in – while the constituency has much lower rates of deprivation.

So, no – the Wakefield election wasn’t a victory for Labour. It was a victory for the political and media class, who’ve maintained the status quo. And it’s all thanks to their disenfranchisement of the poorest people.