DWP: no "secret inquiry" is happening over benefit deaths

The Department for Work and Pensions (DWP) has not launched a “secret inquiry” into deaths of social security claimants – contrary to what media reports have said in recent days. It’s doing what it has done for years: investigating deaths behind closed doors with no accountability. One Labour MP has called the situation the “tip of the iceberg“. And as The Canary previously documented, the DWP should be looking at tens of thousands of deaths.

The Mirror reported that the DWP has launched a:

Secret inquiry… into deaths of 140 disability claimants under Boris Johnson 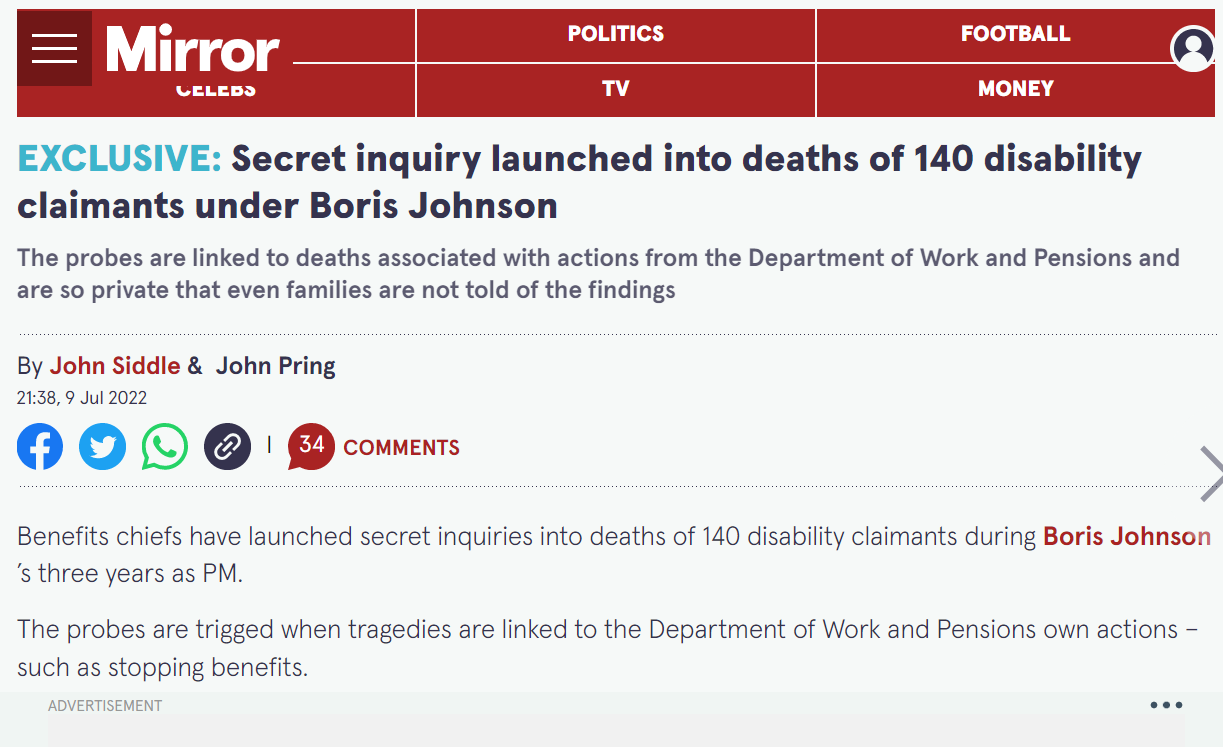 However, this is not strictly what’s happening. What the DWP is doing should not be considered inquiries; rather, it is carrying out things called ‘internal process reviews’ (IPRs).

IPRs are local DWP investigations which take place when a claimant takes their own life. They also happen when a vulnerable claimant complains to the DWP. John Pring at Disability News Service (DNS) has been investigating IPRs for years. As he co-reported for the Mirror, the DWP has launched 140 IPRs during Johnson’s time as PM:

The DWP started its secret probes in 2012 – and they are on the rise. The latest three-year figure is higher than the 126 over the previous five years.

The DWP does not publish the results of IPRs. It even admitted to destroying some of the reports. And while it has launched a Serious Case Review panel to monitor them, so far it has done little. The panel’s most recent minutes show it did not discuss IPRs. Moreover, as The Canary first reported in 2020, the majority of the panel is now made up of civil servants. This raises questions over its independence.

Regardless, IPRs are very different to the “secret inquiry” that the Mirror‘s headline stated.

IPRs have, since 2012, only looked at a few hundred deaths on the DWP’s watch. Yet as The Canary previously reported, between 2011 and 2018 alone nearly 35,000 DWP claimants died. They died either waiting for the DWP to sort their claims or after it said they were well enough to work or start moving towards work. To put this into context, in one month during that time period, it would mean over 700 people could have died on the DWP’s watch. Also, in 2018 alone there were at least 750 (if not more) people who took their own lives while claiming from the DWP.

called for a public inquiry into… [IPRs] over tragedies including suicides.

But as Abrahams tweeted:

To clarify I've called for a public inquiry for 3 yrs. The 140 deaths are only the deaths @DWP are investigating. These 140 deaths including from suicide are the tip of the iceberg. The inq needs to investigate the scale & causes of these deaths @BBCNews https://t.co/PmmPlrEiKK

It is good that the Mirror is working with Pring and reporting on IPRs. But it must also be clear in what it’s saying. The DWP is not holding an inquiry – it is investigating itself. These toothless IPRs will never see the light of day, and effectively absolve the DWP of responsibility. As Abrahams said, and has been saying for years, nothing short of a public inquiry will do.

Featured image via David Long – Geograph, resized to 770×403 and colour-changed under licence CC BY-SA 2.0, and Wikimedia