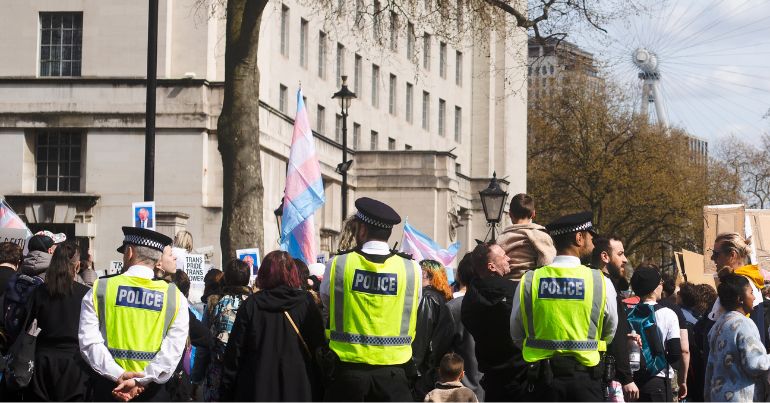 Police monitoring groups have been busy keeping their local communities safe. On 10 July, Hackney Copwatch and Tottenham Copwatch showed up to Trans Pride. And on 14 July, the Copwatch Network took part in Mad Pride. Meanwhile, new groups are gearing up to challenge state violence in their areas.

As Tottenham Copwatch suggest, our collective freedom from police and state violence necessitates trans freedom from this and all forms of violence. The state and its institutions are inherently transphobic.

As LGBTQ+ prisoners’ rights group the Bent Bars Project highlights, trans people – especially those who are people of colour, disabled, homeless, and/or sex workers – are at extreme risk of policing and criminalisation. As extremely vulnerable and marginalised communities, they bear the brunt of state violence.

The state detains trans and gender nonconforming people in prisons according to binary gender categories imposed at birth. Here, they are frequently subjected to violence, held in isolation, and denied access to basic healthcare. It is a basic right for trans people to be able to access gender affirming healthcare.

Trans liberation doesn’t mean the Ministry of Justice (MoJ) opening a new prison unit to detain trans people. It means no trans people in prison, because it means no prisons.

On 14 July, copwatching groups joined Mad Pride, an event run by the Campaign for Psych Abolition. The aim of the event is to resist the state’s stigmatisation, policing and detention of people with mental health issues.

As explained in the campaign’s Twitter graphic, the state continues to use the 1983 Mental Health Act to police and criminalise people experiencing mental ill health:

Abolish the psych system! Mad Pride is taking place in London TOMORROW 14th July – check out @CPAbolition for all the details. Here's some key info about being sectioned ⬇️ https://t.co/7UyAfDt0br

Mental health services are contributing to the traumatisation and criminalisation of those in need of support. As the graphic states, police have the power to detain members of the public who appear to be experiencing mental ill health by sectioning them against their will. When sectioned, the state has the power to force detainees take medication without consent. Patients who resist risk further violence and criminalisation.

Casework and monitoring by INQUEST – a charity that works to support victims of state violence – shows that people with mental health issues are overrepresented in the number of deaths following the use of force. This was Olaseni Lewis’ fate. Lewis tragically died while held in a mental health hospital in 2010 after 11 police officers restrained him. The inquest into the fatal incident concluded that officers’ “excessive, unreasonable, unnecessary and disproportionate” use of force contributed to the 23-year-old’s death. This treatment is rooted in ableist perceptions of people with mental health issues as ‘dangers to society’.

Coming up, Liverpool’s Bizziewatch will be hosting an open meeting to discuss alternatives to policing on 27 July:

The Police Don’t Work For Us…

Come to our open meeting to join the discussion for policing alternatives!

Spaces where we are able to imagine abolitionist alternatives are essential to the creation of a world without police, prisons, immigration detention, surveillance, and all other forms of the carceral system.

It isn’t about having all the answers, but understanding that we can and must develop new ways of living that ensure everyone’s wellbeing and safety. This includes investment in the essential services that communities need to survive and thrive, such as health, education, and housing, rather than police and prisons.

Noting the annual uptick in policing over the summer months, the Copwatching Network shared this helpful information on how to intervene in a police stop:

🌞☀️🌞 As summer comes with carnival, BBQs, Pride parties and other outdoor JOY, we want to remind everybody: DON'T CALL THE COPS ON YOUR COMMUNITIES.

Challenge, intervene and deescalate where problems are happening. Remember the #DROPIN advice to intervene in police misconduct. pic.twitter.com/jTUzeciUdl

New police monitoring groups are popping up in the face of state violence and surveillance. Barnet Copwatch is a brand new group, and is welcoming members. And Camden Anti-Raids is gearing up to challenge immigration raids in the local area. According to the Copwatch Network, Brighton will soon have its own police monitoring group.

There’s no better time to join your local copwatching group. If there isn’t one currently operating in your area, find out how to set up a police monitoring group using Netpol’s practical guide. In order to resist state violence in all its forms, it’s vital that we build community power. The state and its actors don’t keep us or our communities safe, but collectively we can.