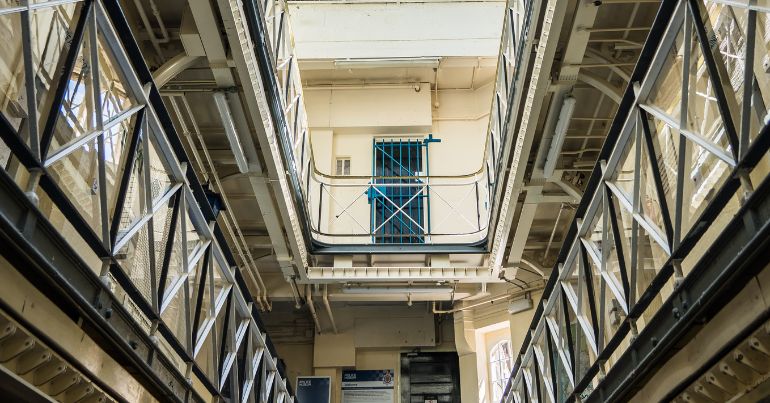 This article includes discussion of self-harm and self-inflicted death

A report published by User Voice has found that the treatment of people imprisoned during the coronavirus (Covid-19) lockdown amounted to the UN’s definition of torture. User Voice is a charity led by formerly incarcerated people.

Harrowing testimonies published in the report reflect just how inhumane the prison system is, and how much power the state has to violate the rights of imprisoned people.

User Voice and researchers from Queen’s University Belfast conducted the study. It involved over 1,400 surveys of imprisoned people across 9 prisons in England and Wales.

85% of the people surveyed reported being locked in their cells for 23 hours per day during lockdown. According to the UN’s definition, solitary confinement is being locked in a cell for more than 22 hours per day. The UN states that 15 days of solitary confinement in a row is “torture or other cruel, inhuman, or degrading treatment or punishment”.

The UN prohibits this cruel treatment of imprisoned people. But the User Voice report shows that people across the justice system endured, and continue to endure, even longer solitary confinement than that.

Many reported being denied access to showers and gym facilities for days on end. Others highlighted that during lockdown they suffered the erosion of access to healthcare, opportunities to practice religion, and rehabilitation programmes including education.

Meanwhile, nearly 60% of surveyed prisoners had no family visits throughout lockdown, including those with children.

Summarising the dehumanising experience of imprisonment, one survey respondent said:

The prison as an institution does not care about us inmates, they just throw us behind the door and treat us like animals.

Unsurprisingly, these inhumane conditions had a devastating impact on imprisoned people’s mental wellbeing during the pandemic.

A young respondent held in a youth offending institute said:

Just not getting out your cell makes you want to scream, innit, makes you feel so depressed every day.

The study suggests that levels of depression among imprisoned people are almost 5 times higher than the general population. And half of respondents reported symptoms anxiety or post-traumatic stress disorder (PTSD).

Before the pandemic, the charity INQUEST raised concerns about the rapidly increasing rates of self-harm and self-inflicted deaths in prisons. INQUEST works to support victims of state violence. Despite warnings to improve conditions, the government refused to act.

2021 saw a 28% increase in the number of self-inflicted deaths in prison custody. 69% of all deaths of 18- to 39-year-olds in prisons during this period were self-inflicted. This is the tragic result of the state leaving those behind bars to languish in inhumane conditions.

Citing lockdown conditions as a reason for the rise in self-inflicted deaths in prisons, one person behind bars explained:

I know there has been at least 7 suicides in the last 14 months in this jail alone. Since April, there’s been at least 3 deaths, 2 have hung themselves… it’s only since April. That’s increased since Covid.

Rather than prioritising support and rehabilitation services for those behind bars, the government is pressing ahead with plans to further expand the prison estate. The Ministry of Justice (MoJ) previously committed to £4bn to create 20,000 more prison places. Then in June, it committed a further £500m towards creating 2,600 more prison places. The state’s so-called “next generation of prisons” include greenwashed ‘sustainably built’ prisons and ‘secure schools‘ to imprison children.

Building more human cages, whatever their guise, won’t improve conditions for the people held in those dehumanising institutions. It will simply create more places to funnel vulnerable and marginalised people into the system.

Imprisoned people’s experiences of lockdown totally contradict the state’s claims that prisons play a rehabilitative function in society. As one imprisoned person said:

Their idea of rehabilitating is locking us up in cells and forgetting about us.

Prisons don’t keep us safe. They are literal sites of torture, where members of our communities are removed from their families, held captive, and traumatised. This does nothing to address the causes of social harm. Social harm is rooted in poverty and other inequalities which the government has entrenched through years of austerity and punitive policies.

After creating new laws that target marginalised communities, and exacerbating the cost of living crisis, the state will have no trouble filling its new prison places.

Imprisoned people remain one of the most marginalised groups in society. Those of us on the outside must urgently listen to and amplify their experiences. We must advocate for those behind bars – and demand an end to the expansion of the inhumane prison industry.