A BBC reporter's inflammatory language around the refugee crisis stinks 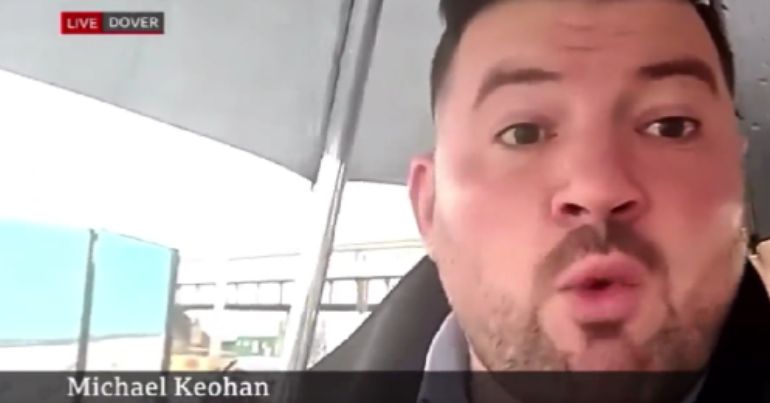 The BBC is facing an anti-racism backlash after one of its regional political reporters described the Tory government’s appalling response to the refugee crisis as the UK “defending itself”.

Michael Keohan is BBC Kent‘s political reporter. And one section of a piece-to-camera in Dover seems to be generating serious problems for the BBC:

A BBC reporter talking about the UK 'defending itself on the frontline against migrants' pic.twitter.com/IlOv99rIpH

Many Twitter users were shocked at what they felt was offensive language in the report. The BBC was accused of reporting that was “partial” and plainly “wrong”:

@BBCNews This is partial, wrong (no invasion) and offensive. Some of us in Kent know that it’s not illegal to claim asylum in Britain and that since Tories have closed all safer routes, these desperate souls have no other choice. Please have a word with @michaelkeohan https://t.co/UFu6WpGVsV

The reportage was quickly branded “vile”:

This is utterly vile from @michaelkeohan – @BBCNews do something about his language!

Someone quipped that Keohan was the least racist person in Kent, on account of the county’s reputation as a Tory heartland:

There was also a suggestion that the “inflammatory language” helped shore up an “ailing” Suella Braverman:

@BBCNews – is this helpful language? Seems rather more like appalling inflammatory language in support of an ailing Home Secretary. https://t.co/NSAjhS3Ljs

Others said the BBC has clearly lost its way as a public service broadcaster. Tories have long complained that the BBC is too left-wing. So, one person said that this kind of reporting was a result of the BBC‘s efforts to avoid criticism:

The constant framing of the BBC as "left leaning" is to push it toward openly fascistic broadcasting https://t.co/sCleOfFqZj

The BBC‘s right-swing was serious enough to get global attention, one person lamented:

What happened to the BBC in the last decade is a story of global significance that doesn't get enough foreign attention.

The public broadcaster that created the model is now this. https://t.co/zpTxSi9bWJ

And the Beeb was accused of Daily Mail-level journalism which clearly veered into openly right-wing, partisan rhetoric:

This is the kind of language I expect to see in the Daily Mail, NOT on the BBC. It is talk like this that perpetuates the racist rhetoric of the far right and normalises such abhorrent attitudes. https://t.co/epTAcyh6EW

Crisis of our own making

A BBC reporter using this language is disturbing. Context is everything around topics as fraught as migration, as we saw recently with a terror attack on a refugee detention centre in Dover.

Anti-migrant feeling of this kind is first and foremost immoral. But it is also dangerous, potentially even lethal. And the state broadcaster, hardly a bastion of virtue at the best of times, covers itself in more shame by allowing this kind of coverage to go to air.

More than that though, we need a media which explains that refugees and migrants are not invaders. They are in many cases, victims of the UK’s own policies – seeking safe haven from the world our own governments have made.