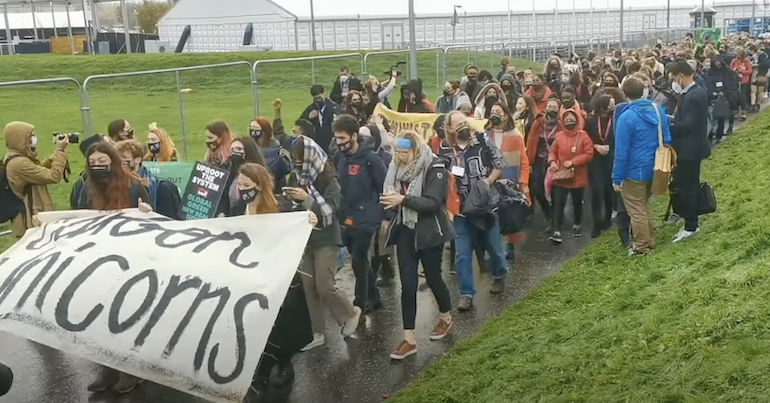 Rishi Sunak’s initial decision not to attend COP27 – and his subsequent U-turn – generated chatter about what these climate conferences offer. In a recent interview, the writer, environmentalist and director of Nigerian NGO Health of Mother Earth Foundation, Nnimmo Bassey, laid out what he believes their value is.

The environmentalist described the COP itself as a colonial “rigged process” that offloads “climate responsibility on the victims of climate change”. But he told South Africa’s Mail & Guardian that they do have value, namely:

The mobilisations that the COPs generate in meetings across the world — people talking about climate change, people taking real action, and indigenous groups organising and choosing different methods of agriculture that help cool the planet. People just doing what they can — that to me is what holds hope.

The only hope I see with the COP is on what people do outside the COP. The mobilisations that the COPs generate in meetings across the world — people talking about climate change, people taking real action, and indigenous groups or…https://t.co/gAI6BBhLuA https://t.co/3b5uKTP9wa

As climate scientist Peter Kalmus pointed out, the rigged and hypocritical nature of these events is evident from before world leaders even touch down at them, and punctuated throughout:

Rich people flying private jets to UN talks sponsored by Coca Cola that give the fossil fuel industry a huge seat at the table while criminalizing climate activists is NOT the way to stop irreversible catastrophic fossil-fueled global heating. #COP27

Governments’ actions, or the lack thereof, also speak to the dishonesty involved.

For example, the UK currently holds the COP presidency, as it hosted COP26 last year in Glasgow. It will hand over the presidency to Egypt for COP27. The UK boasts about its “climate leadership”, saying it can be “proud” of its action on the climate crisis. However, it has failed to cough up millions in promised climate finance by the necessary deadline. These funds are meant to help poorer countries adapt to the crisis, which is – critically – mostly caused by rich countries, like the UK.

As Bassey argued, climate conferences provide opportunities for civil society. Young climate activists have suggested it’s a space where they can try to hold countries to account for their failures:

I have to leave yesterday for #COP27 Egypt 🇪🇬 but due to short of funds, I’m getting delayed.

I’m going to travel all the way for thousands of kilometres from India by selling tea is to tell our world leaders to provide urgent climate finance now to save our planet& our future. pic.twitter.com/5QsrYIZnjm

My message to UK PM @RishiSunak in @thetimes today: End finance for all new fossil fuels, massively scale investments in renewables and call for a #LossAndDamage fund that will help communities cope with the devastating impacts of the climate crisis. @christian_aid #COP27 pic.twitter.com/4ICNSnVl4n

Ahead of COP27, hundreds of civil society organisations have demanded that the conference eject “Big Polluters”. This is a significant issue. The fossil fuel industry had a bigger contingent of delegates at COP26 than any single country.

The ‘climate-leading’ UK also only approved two events that referred to fossil fuels in its programme of “Green Zone” public events for COP26. As DeSmog reported, that was out of a total of 200:

Another failed COP will be catastrophic for people and the planet.
Today, we and 425+ organizations are demanding that #COP27 stand with the people and not Big Polluters' greed.

More civil society demands are also already apparent. They include a call from the Global Forest Coalition for “rights-based and gender-transformative” solutions. Others are demanding the long-awaited establishment of a loss and damage funding facility, meaning support for countries that are highly vulnerable to the crisis’ impacts. Further calls involve the advancement of “recognition and protection for environmental defenders”.

Unsurprisingly, there’s a sense of urgency to these calls from civil society. With extreme weather now increasingly commonplace around the world, and dire climate records broken with some regularity, it’s not hard to see why. A frightening message from hundreds of years ago also suggests it’s crunch-time:

Droughts in Europe made the "Hunger Stones" visible this year. These stones were used to mark desperately low river levels that would forecast famines. This one, in Elbe river, is from 1616 and says: "If you see me, cry"

There is no time to wait. #ActOnClimate #climate #COP27 pic.twitter.com/JQJOLoVFh9

People engraved so-called hunger stones in the past, to mark periods of low water levels and drought. One of them was visible during Europe’s drought this summer. It read:

If you see me, then weep

In short, now is the time for action – and civil society is leading the way.