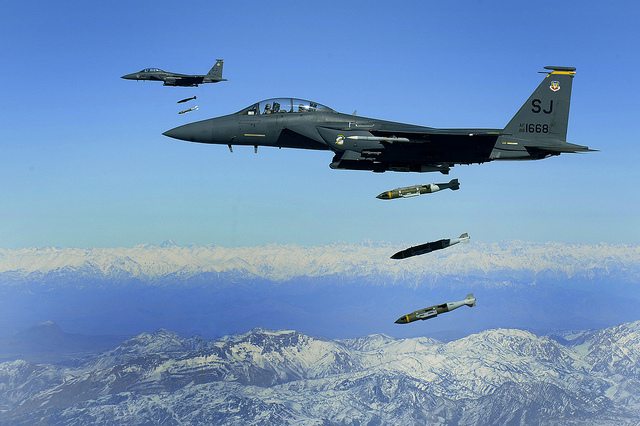 Cash-strapped Britain has announced a £12 billion increase in the country’s war chest, including 8 BAE warships, 9 Boeing maritime patrol crafts, surveillance drones and Lockheed Martin jets. Similarly, the cost for replacing the Trident nuclear programme is spiralling out of control, with another £6 billion added to the budget, bringing the cost to £31 billion, with another £10 billion being set aside for contingencies.

That’s potentially an extra £53 billion that the government is prepared to spend on war, not social services.

Whilst the arms dealers rub their hands in glee at another increase in profits following a terrorist attack, George Osborne announced in his Autumn Statement, that despite reversing some of the cuts to tax credits, he has still made £12 billion in welfare cuts. Coincidentally, this is the same amount being added to the military budget (not including trident), as the poorest in society continue being punished.

Speaking on Radio 5 on 23 November 2015 (at 02.23), Defence Secretary Michael Fallon didn’t even try to pretend that this increase in military spending was not linked to welfare budgets, stating the need

to spend less on some things like the welfare system and to spend more on things that really matter to keep our country safe.

There has undoubtedly been an increase in global terrorism. However, whilst scaremongering over Paris-style attacks on the streets of the UK has been widespread, the figures are stark – there were 0 deaths in the UK from terrorism in 2014. Furthermore, according to the Global Terrorism Index, only 2.6% of deaths from terrorism over the past 15 years have been in the West.

Let’s contrast this with, for example, the deaths attributed to the ‘fit for work’ Work Capability Assessments (WCA). As recently reported in The Canary, experts from Oxford and Liverpool universities  found that between 2010 and 2013 there were 590 suicides linked to the WCA. During the same period, there were 2 deaths from terrorism on mainland Britain.

Time and again the government has fed us the austerity lie and told us that it can’t afford the vital services people rely on everyday. Yet it can always find extra money for militarism and war. Public money should be used for public good, not to boost arms companies’ profits.

Even if Cameron is arguing the extra weaponry will boost our ability to intervene in Syria, his argument that this will help in the fight against global terrorism is dubious. In fact, since 2000, with the military interventions in Iraq and Afghanistan, there are now nine times more deaths from terrorism.

Furthermore, airstrikes in Syria are adding to existing problems and casualties, with the Syrian Observatory for Human Rights reporting that 526 civilians, including 137 children had been killed by Russian airstrikes.

Increased military spending will not make the UK safer, and raining yet more bombs on ravaged parts of the globe will not protect anyone. It’s time to question where our money is being spent, and start demanding it is used on ensuring the poorest in society are protected rather than lining the pockets of arms dealers. We have to show the government that welfare matters more to us than warfare – in doing so, we will build a fairer, more compassionate and safer society.