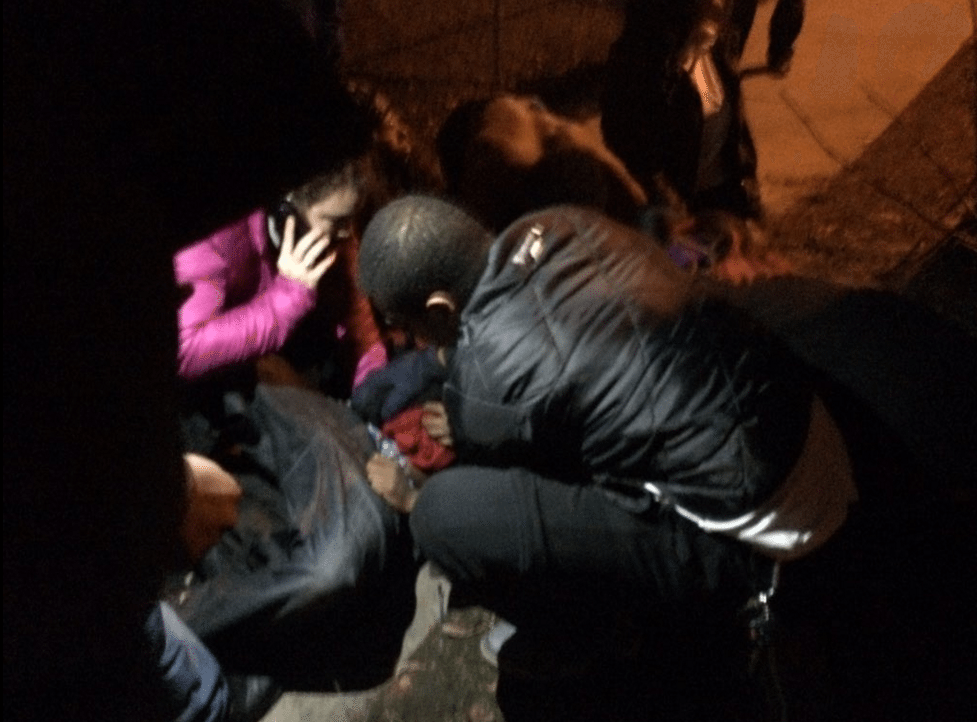 The demonstration has been ongoing since Sunday 15 November, after Jamar Clark was shot in the head by police. The Black Lives Matter movement, and the NAACP’s (National Association for the Advancement of Colored People) local chapter, immediately called for a demonstration outside the Minneapolis Police Department’s fourth precinct, where the shots were fired late on Monday night.

The suspects were described as white males wearing ski masks. Demonstrators reported that the suspects had been seen several times at the 4th precinct since Friday night. According to eyewitnesses, they opened fire on protesters as the crowd was trying to get them to leave. As of Tuesday 24 November, three suspects have been taken into custody.

Many questions still remain unanswered about the incident, most importantly concerning the police’s response in the immediate aftermath. According to eyewitnesses, the police’s first reaction was to use mace (a form of tear gas) against the crowd. Minneapolis PD has refused to acknowledge this allegation.

To be absolutely fucking clear:

Protesters did NOT fire weapons. White supremacists did.

Police maced the crowd to move them back.

.@MinneapolisPD basically told us to that we ruined the crime scene as they maced protesters instead of going after the shooters.

Some Twitter users have accused the police of being tacitly involved in the shootings. The demonstration was taking place near a police department, so why did it take twenty minutes for the police to arrive on the scene? What were they doing the whole time?

Cops standing around instead of looking for the white supremacists who shot ppl tonight. #4thPrecinctShutDown pic.twitter.com/rjvhRkyWKi

Considering that the shootings happened one block away from the police station, the police’s response seems either very lazy, or entirely deliberate. Either way, demonstrators interpreted the delay as further proof of racism in the police force.

If racism has never been clear before, imagine a group of white supremacists shooters escaping a crowd full of police. #4thPrecinctShutDown

What happened on Monday night in Minneapolis was yet another episode of violence in America’s long history of state racism and white supremacy. It was an act of terrorism, no less malicious in intent than any other terrorist attack, but because white supremacy does not fit the mould of terrorism in the West, it will never be treated as such.

Monday’s shootings came a day after Republican frontrunner Donald Trump publicly sanctioned violence against protesters. During a radio call-in, he said he approved of the fact that his supporters punched and kicked a Black Lives Matter activist during a rally for the Trump campaign in Birmingham, Alabama. The Republican candidate said:

Maybe he should have been roughed up.

Donald Trump is leading the opinion polls for the Republican party, but his inflammatory and racist comments are certain to breed more violence against non-white people in the USA. In the wake of the Paris attacks, he echoed the Third Reich by insisting that Muslim people should be registered on a database, and that mosques should be put under surveillance.

And he is sadly not alone. There is a growing paranoia about terrorism in America, with 17 states stating that they will no longer accept refugees. Islamophobia is on the rise, as in Irving, Texas, where a group of armed white people staged a protest outside a mosque. One spokesman for the group told Fox 4 News:

We are here protesting Syrian refugees coming to America, protesting the Islamization of America.

The conflation of refugees and terrorists is completely unfounded. The truth that is staring everyone in the face – one that so many people in America still refuse to acknowledge – is that white supremacy is the ideological root behind most domestic terrorism in the United States.

This was terrorism. White supremacist terrorism. The most common on the planet.#4thPrecinctShutDown

White supremacy is part and parcel of American history; it is the corollary of slavery, that was not abolished with Jim Crow laws. However, the Black Lives Matter movement in Minneapolis did not back down after the shootings. If anything, what happened Monday night drew more solidarity with the protest, as 1,000 people marched to City Hall on the next day. The struggle against white supremacy terrorism starts with confronting the ideology. This means challenging racism in our communities, including anti-refugee and anti-migrant sentiments.