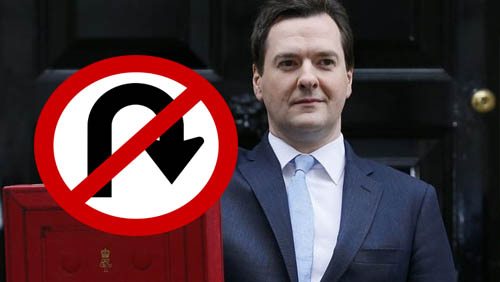 Working people may be breathing a collective sigh of relief as George Osborne’s autumn statement reveals a backtrack over scrapping working tax credits. If scrapped this would have left 3.3 million families on average £1,100 worse off.

But, the cowardly chancellor has left it to treasury officials to reveal the news that child tax credits will still be cut for families with more than two children. That’s £2,780 per child. It’s a truly amoral move that means clothes off the back, and food off the plate for children of larger, lower-income families.

We had to wait a while before the treasury released information revealing these hidden cuts. Early reports of an apparent U-turn left political commentators scratching their heads:

Osborne made the following statement to a packed House of Commons, not once mentioning that the cuts to child tax credits would go ahead as planned:

And because I’ve been able to announce today an improvement in the public finances, the simplest thing to do is not to phase these changes in, but to avoid them altogether. Tax credits are being phased out anyway as we introduce universal credit. What that means is that the tax credit taper rate and thresholds remain unchanged.

Without so much as pausing for breath he goes on to say:

The disregard will be £2,500. I propose no further changes to the universal credit taper, or to the work allowances beyond those that passed through Parliament last week.

Yes, that’s actually a cut. Before, if your wage increased by up to £5000 in a given year you would not have to pay anything back. Now this has been reduced to £2,500.

No-one expected him to credit Corbyn’s Labour, rebellious Tory backbenchers, or the House of Lords for the change of mind, but it was clear from the cheers and hoots of laughter from across the House that the significance of the U-turn had not gone unnoticed.

The last month saw persistent questioning from Jeremy Corbyn in PMQs, tearful breakdowns on live television from members of the public, an impassioned maiden speech from a Tory backbencher, and a full-scale revolt in the House of Lords. Certainly, the PM and Chancellor have been forced to gulp down huge helpings of humble pie over this issue – just not enough it seems.

It’s a partial victory for Corbyn, albeit one whose details leave a bad taste in the mouth. It can be read as a vindication of his tactic of serious and persistent questioning in PMQs, which put real pressure on the PM over tax credits. At this juncture, even Jeremy Corbyn’s detractors will be hard pressed not to give credit where credit is due, no pun intended.

But while this decision to continue working tax credits will be welcomed, and indeed mean that many of those on the brink of poverty avoid complete destitution, it still leaves us scratching our heads wondering where the money is coming from. The frankly outrageous cuts to large families can’t account for it all.

The fact that the money has been rustled up at this very moment is expedient for Cameron and Osborne, and further supports the argument that austerity is an ideologically motivated political choice, not an economic necessity.