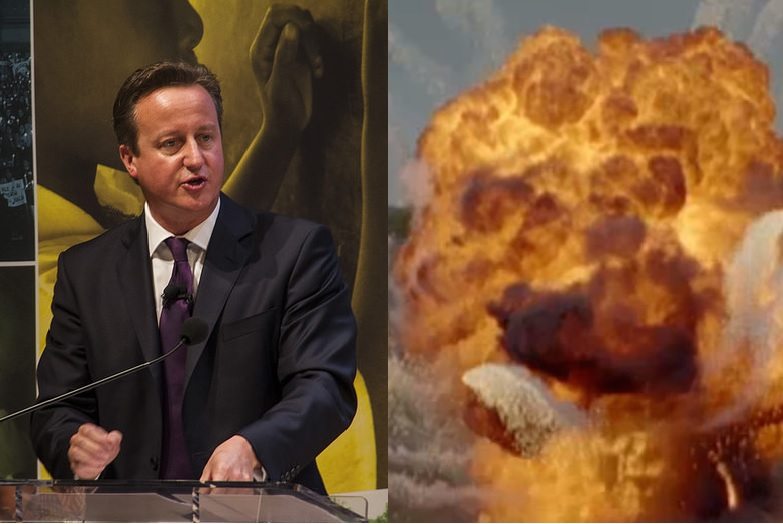 David Cameron is deciding whether to ask the UK if he can wage another war, this time in Libya. His deliberation over military intervention in the country, comes just a couple of months after the heated vote in parliament on Cameron’s request for airstrikes in Syria.

That deeply contested win for the prime minister – MPs voted 397-223 in favour – had very little support from the UK public. So, the mainstream media have already dutifully begun pushing out pro-military action propaganda to make Cameron’s plea, if he makes it, more palatable this time around.

The debate on military action in Libya has gained momentum following a recent US intelligence assessment. Reportedly, an anonymous defence official has claimed the findings show ISIS (Daesh) is declining in Iraq and Syria, but gaining ground in Libya. On Tuesday, US secretary of state John Kerry said:

We’re still not at the victory that we want to achieve and will achieve in either Syria or Iraq, and we have seen Daesh playing a game of metastasizing out to other countries, particularly Libya…The last thing in the world you want is a false caliphate with access to billions of dollars of oil revenue.

France is also said to be keen to move towards a military solution, and Italy has suggested it would consider being involved. In fact, Algerian newspaper al-Khabar recently reported that the US, UK, and France, have already informed the Algerian government that they are planning airstrikes on Daesh in Libya – although their claim could not be independently verified.

As the last decade and a half have shown, it is not unusual for western governments to use military action as a first resort, rather than last. They also often refuse to learn lessons from past wars. However, with the UK’s Syrian intervention very much a current issue, it’s ‘success’ should be taken into account when considering the prospect of strikes in Libya.

So, have the Syrian strikes been successful? Not at all, actually quite the opposite. As writer Tom Pride has pointed out, the strikes have even been criticised by anti-Daesh groups within the region. A Syrian journalist, working with RBBS – a collective of citizen journalists reporting from the ground – commented:

Increases every day the number of air strikes on the city, and the misfortune of civilians. Most of the strikes targeted the National Hospital, the largest hospital in the city and the lifeline for all; today the National Hospital became completely out of service, and disease has become a calamity.

Admittedly, it’s difficult to know which country carried out the strikes the journalist mentions, because there are so many militarily involved in Syria. In fact, Tom Pride points out that very few UK strikes have actually occurred, because of a lack of available targets in a battle with so many players. Extraordinarily, the UK even targeted oil fields that were already supposedly “obliterated” by Russia – that’s how sparse genuine targets actually are.

What the strikes have been successful in, is giving Daesh the anti-western propaganda they need to flourish. This is true in Syria and Iraq, and would certainly apply to Libya. Dr Arturo Varvelli, Head of Terrorism and Research Fellow at the Italian Institute for International Political Studies, spoke to Sputnik news on the matter:

Seemingly, such cooperation between radical groups in Libya is already starting to happen, amid the discourse on intervention.

Despite the serious questions, and flaws, that need to be addressed before an intervention in Libya is decided, the mainstream media has already begun a propaganda campaign to justify the action. News outlets are pushing the narrative that a Daesh “surge” is occurring in Libya, where top Daesh commanders are “taking refuge“, and “control and crucifixions” dominate daily life. As Media Lens have identified:

The BBC is pulling no punches in their manipulation of the public mind. They have even made clear how readers should feel about their reporting on life in Libya:

Warning: You may find some of the content below disturbing

It is questionable that the media have taken such a strong, and dramatic, interest in exposing the troubles in Libya, at the very point when western leaders are looking to justify intervention. Even more suspicious is the lack of media attention being given to the giant Libyan elephant in the room. Journalist Glenn Greenwald sums this up with perfect ridicule here:

The U.S. Intervention in Libya Was Such a Smashing Success That a Sequel is Coming https://t.co/NBlWokUuUa

Daesh was handed the opportunity to flourish in Libya by the western military intervention in 2011 that toppled – in the most brutal fashion – its leader Muammar Gaddafi. Political analyst, Hafsa Kara, explained to Sputnik news:

One of the reasons ISIS is in Libya is precisely because of the NATO onslaught of 2011 which led to a power vacuum in which terrorist organizations such as ISIS actually thrive…It was hugely predictable that this would happen given the Iraqi scenario of ten years before.

The suggestion that Daesh will be defeated by the same actions that ensured its rise in the first place is utter insanity. Regardless, the media will bang the war drum in line with their governments tune in typical fashion, as we saw in the reporting leading up to the Syrian strikes. Let’s hope the public sees through this, and presses on their government the total lunacy of military intervention in Libya.

Take part in efforts by the Stop The War Coalition to resist the constant call for war.

Write to your MP to let them know what you think about military action in Libya.

Support The Canary so we can keep you informed about important news.