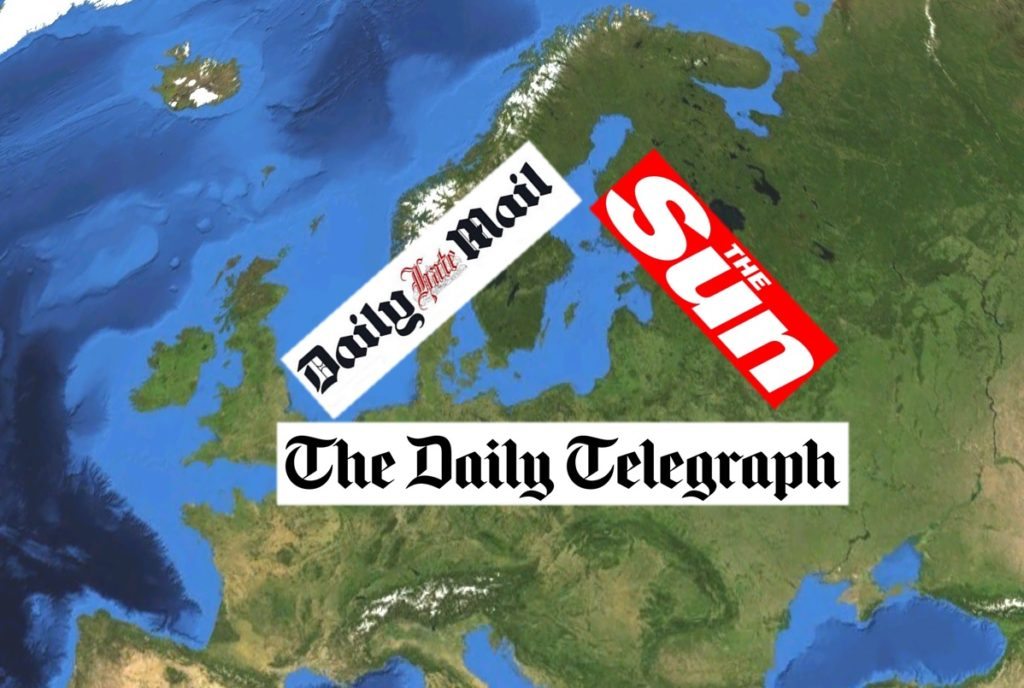 Ever felt like Britain’s media outlets have a right-wing bias? Well, now the pollsters at YouGov have confirmed it.

Citizens in the UK, France, Germany, Denmark, Finland, Norway, and Sweden were all asked about bias in their respective media systems, and the results showed that Britons believed theirs to have the greatest amount of right-wing bias.

Around 26% claimed newspapers, TV channels, and radio stations were “too right-wing“. This was more than in the other countries, where citizens either believed their media was more neutral or too left-wing. In Britain, only 17% thought the media was “too left-wing”.

Asked about coverage of issues like housing, crime, health, immigration, and economics, the British media was viewed consistently as having a right-wing bias. And there were always more people who said the press favoured the right over the left.

On economics, 27% of Brits believed there was right-wing bias (compared to only 12% who thought there was left-wing bias). Regarding immigration, 34% thought the press focused on negative coverage (24% claimed it was too positive).

Now this new YouGov poll may not come as a big surprise, but it does remind us once again of the illness eating away at the British media from the inside.

Rupert Murdoch, who is worth $10.9bn, owns both the Sun and the Times. He has previously sought to spread fear about asylum seekers while publishing hateful propaganda equating Britain’s Muslim community to Daesh (Isis/Isil). The Sun has also attacked junior doctors in an absolutely shameless manner.

The Daily Mail, meanwhile, is owned by tax-avoiding millionaire Lord Rothermere. This paper has happily portrayed refugees as terrorists and rats.

The owners of the Daily Telegraph, the billionaire Barclay brothers, have been accused of suppressing stories that affect their commercial interests. Their assistance in the cover-up of HSBC’s shameful scam, which saw the bank steal £1bn from British high-street shoppers, is just one example of this. The Telegraph owners have also been referred to as “tax exiles”.

Finally, billionaire Richard Desmond is the owner of the Express (and the Star), which routinely spreads “racist fiction” and acts like a “UKIP press release”.

By focusing their readers’ attention on minority religious communities and vulnerable people fleeing from war and destruction, all of these incredibly wealthy men actively work to distract British citizens from seeking political change.

In short, it is no wonder that the news is skewed towards the right when we consider the role billionaires play in the British press. How can we possibly expect the interests of the vast majority of citizens to be represented when the owners of our media have so much to gain from misinforming and creating distractions from the real issues of the day?

What’s worse is that the right-wing bias in the big media outlets mentioned has been clearly linked to citizens’ voting habits. The Guardian has suggested that the propaganda in these papers played a key role in helping the Conservatives back into government in 2015.

What does it mean to have a ‘free’ media when the nation’s TV channels, news outlets, radio stations, search engines and social media platforms are owned by a handful of giant corporations?

If you are worried about right-wing bias in the British media, support the Canary in its efforts to represent the majority of the population rather than the corporate elites while making objective analysis a major force in the world of news.