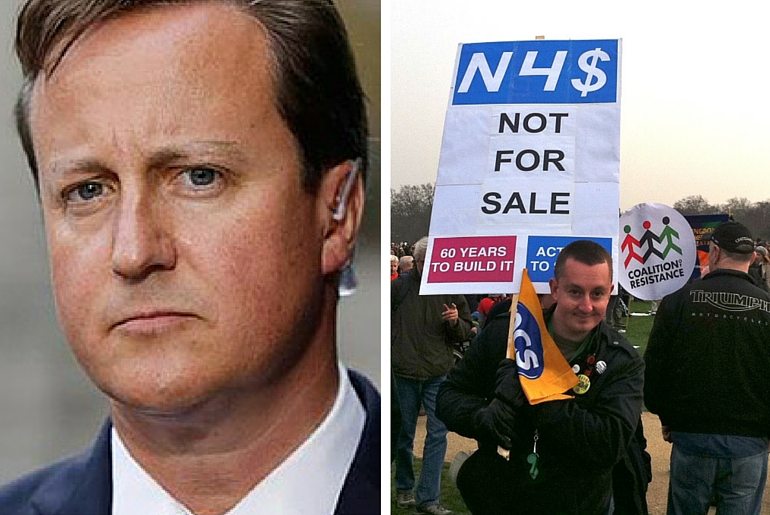 A huge increase in the number of NHS contracts handed out to private firms has led to concerns the UK may be heading towards a costly, insurance-based healthcare system like that in the US.

The Health and Social Care Act 2012 completely changed the English NHS system. It means that:

And now, The Guardian has reported that these changes mean more than a third of contracts put out to tender have gone to private healthcare firms. This is despite the fact that contracts taken up by private firms in recent years have failed miserably.

The very first NHS hospital, Hinchingbrooke, to be run by a private firm, Circle, was declared “inadequate” and their contract cancelled. This was extremely damaging for a government that has been so desperate to increase the number of hospitals run by private firms. Circle was accused of:

Patients were even told, “don’t misbehave, you know what happens when you misbehave”. Junior doctors even marked patients as “do not resuscitate”, without speaking to the families of the patients or consulting senior clinicians.

While these firms may be able to cut costs, they do this at the expense of quality care, putting lives in danger. The disasters of this privatisation, that promised “unprecedented” savings, did not stop more private firms getting involved in running NHS services.

Serco took on a 3-year contract worth £140m to run community health services in Suffolk. Before Serco landed the contract, the four-hour response targets for nurses and therapists to meet patients was achieved 97% of the time (the target is 95%). However, in November 2013 Serco only managed 89.3%, leading to concerns about the services that they were providing.

Also, bus operator Arriva gained a contract worth £66.8m in 2013. But, due to the fact that they provided  incorrect information indicating a higher performance than they actually achieved, Arriva lost their contract.

These failures of privatisation in the NHS have not put the government off their privatisation initiative, nor put firms off seeking to take over the NHS. Dave Prentis, from the biggest health union, Unison said:

There is no evidence to suggest the private sector does health any better than the NHS. Even such monumental failures as Hinchingbrooke have done little to dampen the government’s zeal for the market.

The UK will soon have a healthcare system like the US

Prentis also warned that our free NHS healthcare system could soon be replaced by a US-style system, where you receive health care only if you can afford the extortionate fees:

The public wants well-run, efficient health services. They are not so keen on private firms putting shareholders and profits before patients. And they are increasingly nervous that ability to pay could soon count for more than someone’s need for help.

Worryingly, many firms from the US are seeking to buy NHS services and have not been discouraged by the failures of private firms in the NHS.

The US market has been heavily invested into and there is a scarcity of assets … [the major US companies] have bought everything in North America and now American capital is looking at buying a lot of the assets in the UK and western Europe.

Andrew Lansley, the former Health Secretary, who drafted the Health and Social Care Act 2012, has benefited hugely from his reforms. He has earned money advising private firms on these very reforms, which the government has tried to cover-up.

Moreover, many peers and MPs that pushed the Act through parliament have vested interests in seeing private healthcare firms succeed. A staggering number (too many to list) have shares in private healthcare firms and receive regular payments from such firms. Among them are George Osborne and David Cameron, who have received donations from those benefiting from the Conservative government’s reforms. Unsurprisingly, shareholders from the disgraced firm Circle have donated large sums to the Conservative party.

The increasingly easy way that private healthcare firms can buy up NHS contracts- with nearly 40% of new contract now taken up by private firms- suggests that, bit by bit, the NHS is being sold to corporations who seek to put profit before people. Our elected officials have close links to the individuals who benefit directly from NHS reforms our politicians are pushing through.

Sign this petition that argues NHS privatisation is constitutionally non-viable

Write to your MP to express your concerns.