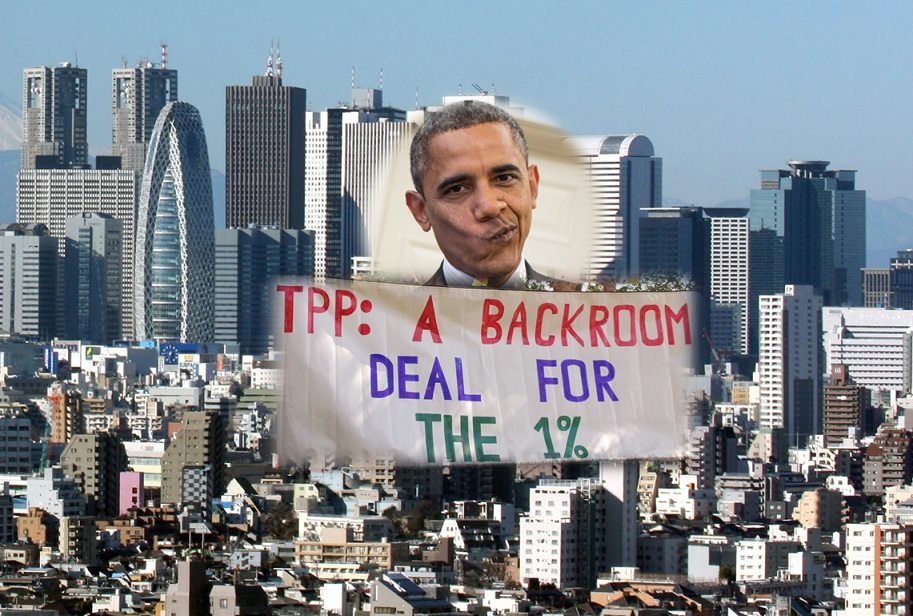 On 3 February 2016, an international trade deal was signed by the USA and 11 other countries. And as the ink dried, humanity received yet another significant setback. Countries making up around 40% of the world’s economy will now see average wages pushed down, income inequality grow, and medicines increase in price. So why has US President Barack Obama been so upbeat about the Trans-Pacific Partnership (TPP) trade deal? And why should we question his judgement on this?

Obama claims that the TPP – which will break down trade and investment barriers between Australia, Brunei, Canada, Chile, Japan, Malaysia, Mexico, New Zealand, Peru, Singapore, Vietnam, and the USA – is a massive step forward. It will put “American workers first”, he says, and will “bolster our leadership abroad and support good jobs here at home”.

More revealing perhaps is the fact that he said the TPP will ensure the United States, “and not countries like China”, will “write the rules of the road in the 21st century”. In a world where the US owes China $1.2tn, Washington wants to enact the new Pacific trade deal into law as soon as possible. And the White House hopes this will be done by the end of 2016.

While Obama is a smooth and convincing public speaker, that doesn’t mean he’s right about the TPP. International trade deals benefit large companies rather than ordinary citizens. And when they’re negotiated behind closed doors, as the TPP was for seven years, they’re almost guaranteed to be designed for the benefit of the world’s wealthiest.

According to Public Citizen, a non-profit organisation which receives no government or corporate money, the Trans-Pacific Partnership will have a disastrous effect on the countries concerned. When the final TPP document was released in November 2015, the group soon summarised the deal’s negative impacts as follows:

In a real democracy, one where government serves the 99 percent, the smoldering in America would be piles of discarded TPP texts.

He continues, insisting that the Trans-Pacific Partnership will “further enfeeble American manufacturing” by allowing corporations to exploit the “less-than-subsistence wages” of other countries and “collect bigger profits as a result”. And there are only “weak plans” in the deal, he says, to improve conditions in other nations so American workers don’t have to compete with forced or child labour.

Even Cornell University’s Prof Chantal Thomas insists that “the TPP won’t resolve the problems of economic inequality and stagnating wages”. Any economic benefits that the wealthiest sectors of the population may receive from the deal, she suggests, is “not worth all the other baggage” it brings with it. In short, she argues:

we should focus on existing domestic and international challenges rather than potentially adding new ones.

In the USA, there appears to be little hope of stopping the TPP being enshrined in law. But while Hillary Clinton helped to create the TPP and “consistently praised it”, says author David Swanson, Bernie Sanders “credibly opposes the TPP”. As a result, he notes, “electing him might actually make a difference on this issue”.

And although the TPP doesn’t affect the UK directly, there is no reason to feel relieved. The Transatlantic Trade and Investment Partnership (TTIP) is essentially the EU-US equivalent of the Trans-Pacific Partnership. So if the TPP doesn’t sound appealing, we must step up our efforts against TTIP right away.

For more on the Trans-Pacific Partnership, see this article at the Canary.

Commit to taking part in or organising local action or educational events about the TPP (and TTIP) here, and see the Flush the TPP slideshow here.