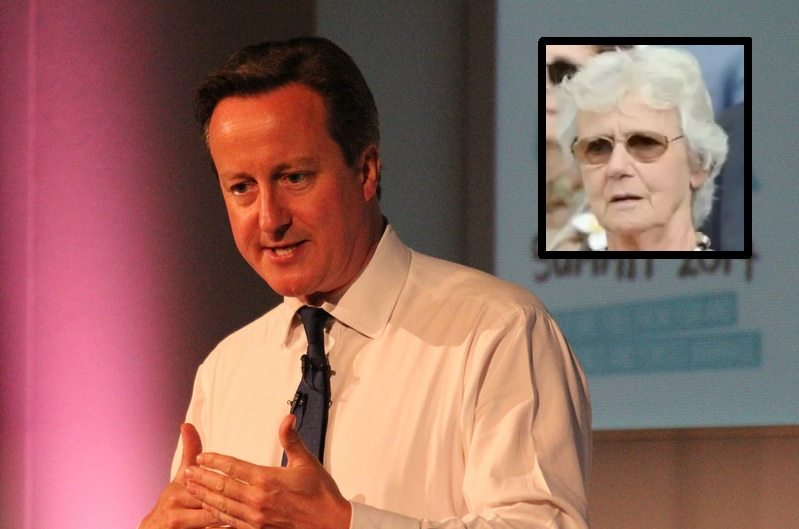 Children’s services are suffering so badly under the Conservative government’s austerity agenda that even David Cameron’s own mother and auntie have publicly opposed the cuts.

According to the Mirror, the Prime Minister’s mother, Mary, has admitted that she signed a petition to save a raft of children’s centres in Oxfordshire under threat of closure. And now his aunt has said she will join in a protest over the closure. This latest familial embarrassment for Cameron hammers another nail in his leadership coffin, perfectly illustrating how unfit he is for purpose.

The petition supported by Mary Cameron calls for Oxfordshire County Council to reverse its current plan to close 44 children’s centres – all the centres in the county. It explains:

Our Children’s Centres are a lifeline to new parents who rely on locally accessible advice and support at a time when it is most needed. Cutting these essential services would leave families vulnerable and isolated, and fail an entire generation of children.

The council’s proposal to close the centres is a result of budget cuts, as the Conservative government have slashed council budgets by around 40 per cent. The impact of such cuts is being felt around the country, and children’s services often bear the brunt of the shortfall. The Policy Exchange estimated that between 2010 – when the tories first came into government – and 2013, 580 children’s centres closed due to local authority cuts. And the National Children’s Bureau has reported:

Initially, these savings generally hit the poorest communities hardest, because cuts are not equal across all constituencies. As the Guardian reported in 2014, Liverpool city council, a city with high levels of deprivation, faced cuts of 27.1 per cent. This was after the council had already cut its children’s centre budget by 70 per cent. Hart district council, with very low levels of poverty, had cutbacks of only 1.5 per cent.

That’s the way things work in tory Britain. Austerity for the poor, and prosperity for the rich. However, it seems that Osborne’s relentless, out-of-control, austerity is now reaching more affluent communities. And Cameron’s mother doesn’t like it.

It is not the first time a Cameron has raised concerns about the impact of Conservative cuts. David Cameron himself wrote to his own council complaining that cuts were in danger of hitting frontline services. He then offered to “initiate a further dialogue” between Number 10 policy unit advisers and the council to help them with their financial affairs. This led to Cameron being accused of preferential treatment and investigated for breach of the ministerial code.

According to the BBC, at the same time, Cameron was lobbying his local police force to prevent the closure of stations. These closures were due to financial restraints and cost-cutting requirements. Speaking about Cameron’s efforts, Shadow cabinet minister Jon Ashworth commented:

…I’m surprised that the prime minister is so out of touch with what the impact of these cuts would mean that he is now lobbying organisations in his own constituency against the very cuts he is implementing.

To undertake such extensive cuts without understanding the impact they have constitutes severe incompetence on Cameron’s part. He is not fit to govern. Seemingly though, he is a better MP than PM. So perhaps he should head back to his constituency and focus on what he does best.

That would surely make his mother proud.

–Get involved with the People’s Assembly to join the campaign against austerity.
–Sign the petition discussed here, or start your own for issues in your local area.
–Support The Canary so we can keep providing you with important news that the mainstream is reluctant to tell you.