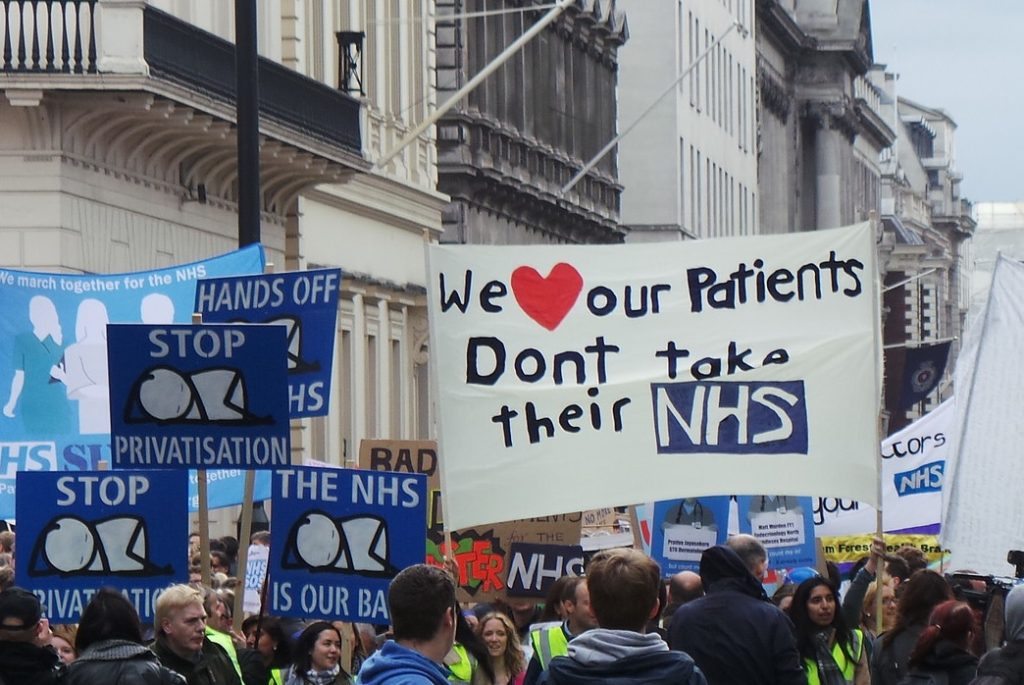 The junior doctors’ strike on 10 February was not inevitable. Simple steps could have been taken to resolve the dispute, ensuring a quality NHS for both staff and patients. But the stubborn response of Health Secretary Jeremy Hunt and his government has made industrial action essential.

The first necessary step to resolve the dispute would be to throw the proposed junior doctor contract in the bin. The Health and Social Care Act would then need to be repealed, along with the privatisation it encourages, and the incredibly wasteful Private Finance Initiative (PFI) abolished. Cuts would need to stop and the NHS would need to receive sufficient funding. Finally, staff should be given more control over what happens in their workplace.

In short, the government must listen to health professionals rather than overpaid bureaucrats, businessmen and corporate interests.

Here’s why the steps above are needed for government disputes with NHS workers to end.

According to GP and author Youssef El Gingihy, the new contract offered to junior doctors “appears to be a calculated exercise to break the allegiance of staff to the health service” by making them work more for less money. In other words, make workers sick of their treatment in the NHS so private healthcare grows. And this tactic may be working, El Gingihy insists, with “nearly half of foundation doctors opting not to continue their training in the NHS”. One junior doctor insists:

It’s so grim on the frontline now… I have never felt so despairing or so close to quitting medicine.

the profession is at absolute breaking point. I see doctors in tears because they are so despairing about what the future holds.

But El Gingihy says the junior doctor dispute is just part of the government’s assault on the NHS and its workers:

The bigger picture is a government hell bent on the privatisation of the health service.

And the Health and Social Care Act is aimed precisely at allowing the NHS to be privatised by abolishing the government’s responsibility for the service.

Now with no legal mandate to provide more than emergency care, El Gingihy stresses, parliament can ration services as much as it likes while outsourcing other services to profit-making corporations.

In 2014, for example, £3.54bn (or 40%) of the £9.63bn NHS deals signed were given to private firms – which then provided for-profit services while using the NHS logo. Meanwhile, the NHS spends around £640m each year on management consultants in their attempts to keep up with political changes.

The Private Finance Initiative (PFI) initially saw new public hospitals funded with private capital. But while 100 PFI hospitals cost around £11.5 billion, the repayments will cost £80bn. In other words, the government will end up paying tens of billions of pounds to banks and big corporations when it could be spent much better on improving conditions for both staff and patients. So before messing about with contracts, parliament must stitch up the self-inflicted PFI wound which is haemorrhaging around £10bn of public money into private pockets every year.

Prof Neena Modi insists that Britain’s “part-privatised” NHS wastes billions of pounds. Although evidence shows “for-profit healthcare is poorer quality at greater cost”, she says, UK governments have based their policies on “flawed beliefs” for the past 25 years. Markets were thought to drive efficiency, and healthcare was now to be considered a business. This logic saw Simon Stevens, former boss of a US healthcare firm and ex-adviser for New Labour on bringing the private sector into the NHS, made the head of NHS England.

Essentially, recent governments have overseen an increasing “marketisation and commercialisation” of the NHS. And under the Tories, the institution has been “starved of resources and required to find £20bn in ‘efficiency savings'”. All of this, says Modi, has “led to escalating costs, inefficiencies and a widening of health inequities”.

In the 2014 Commonwealth Fund report, the NHS was compared with the health services of 11 wealthy countries. With the lowest funding per capita, the institution ranked first in healthcare performance. The USA, meanwhile, spent the most but ranked at the bottom of the list. This study said a lot about the inefficiency of private healthcare and the efficiency of public healthcare.

In the 2015 election, the Conservatives promised to spend £8bn more on the NHS. But they kept quiet about the £22bn of “efficiency savings”, i.e. cuts. On top of the £15bn of cuts since 2010 and the freezing of the NHS budget, says El Gingihy, this ideological assault on the health service has left it suffering:

There is indeed a crisis in the NHS. But as El Gingihy insists:

it is a manufactured crisis due to deliberate policies that have stripped the NHS of funding.

Health analysts at Health Consumer Powerhouse (HCP) looked unfavourably on the NHS in 2015. With poor cancer outcomes in the UK, HCP’s Prof Arne Björnberg claimed expenses were being spared, leading to a lack of radiation treatment facilities and stinginess regarding cancer drugs. The company also criticised the system’s “autocratic top-down management culture” – a problem Labour MP Tony Benn raised back in 1995.

Benn spoke of a boat race between the NHS and a Japanese crew, in which the latter won. In response, the NHS set up a consultancy, which concluded that it had lost because it had eight people steering and one rowing. It then reorganised its structure, leaving “three steering managers, three assistant steering managers and a director of steering services, and an incentive… to the rower to row harder”. But it lost again.

The Guardian’s Mark Rice-Oxley says the NHS is “under strain like never before” as:

But even considering the current problems, the NHS still has an amazingly committed workforce and still provides great value for money. Just imagine what could be achieved if cuts stopped and the NHS received the funding it deserves to boost staff and resources.

6) Listen to the professionals

The best way to move the NHS forward is for its wonderful members of staff to have much more of a say in how it is run. And fewer managers and less interference from politicians wouldn’t hurt.

But at the moment, the voices of healthcare professionals are being seriously disregarded by a government fixated on ideological austerity and privatisation.

Junior doctors and their colleagues have thus hit Twitter to remind British citizens that the decision to strike was not taken lightly. Dr Alexander Gates said the concerns of the whole profession were “falling on deaf ears”. Others used the #IAmTheDoctorWho hashtag to make sure their voices were heard:

#IAmTheDoctorWho is a locum because I'm not sure I want to stay in a job where my government don't support me, value me or listen to me.

#iamthedoctorwho who does heart surgery and wishes he didn't have to strike just to be heard by @Jeremy_Hunt pic.twitter.com/k3tjYBNePQ