Where the hell was Hunt? Hiding from urgent questions on junior doctors' strike (VIDEO) - The Canary 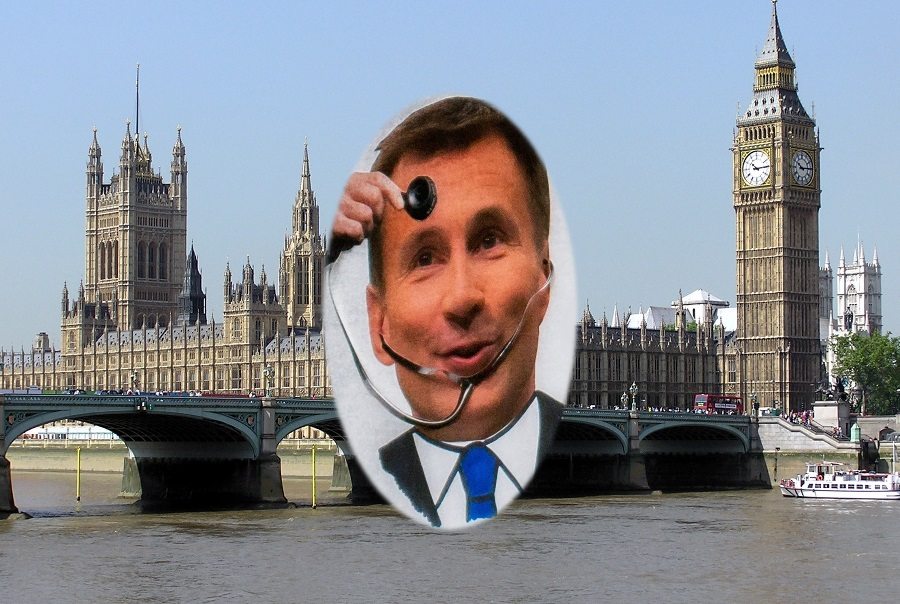 Faced with yet more scrutiny over his conflict with junior doctors, Health Secretary Jeremy Hunt physically avoided a debate in parliament on 8 February. MPs wanted to quiz Hunt about the next junior doctors’ strike, but he clearly didn’t want to be around when they did it.

Hunt may have hoped to escape criticism for a day by sending a junior minister to parliament to defend his government’s controversial plans, but opposition MPs weren’t about to let him off the hook so easily. They had called an “urgent question” in the House of Commons in preparation for the next junior doctors’ strike, planned for Wednesday 10 February. And they were angry that Hunt had not bothered to turn up to answer for himself.

Labour MP Ben Bradshaw, who was Minister of State for Health between 2007 and 2009, said Hunt’s absence was “at the very least odd”.

The reason? In Bradshaw’s opinion, the junior doctors’ strike and deadlock in negotiations were not down to the doctors’ union – the British Medical Association (BMA) – but down to Hunt:

And just as a guilty person does their best to avoid interrogation, Hunt clearly thought it was wise to skip the parliamentary examination.

Labour’s first Shadow Minister for Mental Health, Luciana Berger, took to Twitter to criticise the Health Secretary. She called his no-show an “affront to the public and parliament”, while asking:

How many Urgent Questions and Statements has @Jeremy_Hunt now dodged?

@lucianaberger @Jeremy_Hunt How is he allowed to be absent? Clearly doesn't have the courage of his convictions

Hunt’s battering on the BBC

Another reason for Jeremy Hunt’s absence may have been the grilling he received on 7 February on the BBC’s Andrew Marr Show.

Hunt no doubt hoped his appearance would get the public on his side over the junior doctors’ strike, but things didn’t go as planned.

Marr’s challenges soon left the minister squirming, with the presenter immediately criticising Hunt’s “poisonous misrepresentation” of statistics which sought to link extra weekend deaths in hospitals to poor staffing of junior doctors. Standing up for the medics, Marr said:

That drives them absolutely insensate with anger and it’s not true.

Marr then quoted several junior doctors to Hunt to show how he had made them feel. One said:

Mr Hunt has made me feel demoralised, insulted and cheap. He implies we’re the problem, when I give my life to the NHS. It’s so grim on the frontline now I sometimes work 14 or 15 hours straight without a second even to eat. I have never felt so despairing or so close to quitting medicine.

the profession is at absolute breaking point. I see doctors in tears because they are so despairing about what the future holds. Jeremy Hunt has done this. He’s driving away a whole generation of doctors.

But Hunt did not apologise.

Instead, he attacked the BMA, saying it had been “totally irresponsible”. Suggesting it was to blame for the lack of agreement in talks over pay and hours, he said it had been “spreading misinformation”.

Marr responded by placing the focus back on junior doctors, saying:

The big picture is… that they are still absolutely furious with you. 98% of these highly educated, hardworking people have voted to strike. It can’t be everybody else’s fault but yours, surely?

You can see the full interview here:

To be fair, Jeremy Hunt may well have had a more important commitment which made it impossible for him attend parliament to answer MPs’ urgent questions on 8 February. But given his track record, it seems much more likely that he just wanted to avoid having two uncomfortable encounters in the space of just two days.

What is very clear is that Hunt is feeling the pressure. So let’s keep it up.

Ask Jeremy Hunt on Twitter why he doesn’t want to answer important questions in parliament about the junior doctors’ strike.

Sign this official petition against the Junior Doctors’ Contract, which expires in March 2016.

Support the campaign to prevent the Transatlantic Trade and Investment Partnership (TTIP), a treaty that will open the service up to total privatisation.

Assist 38degrees in its campaign to mobilise support for public healthcare.