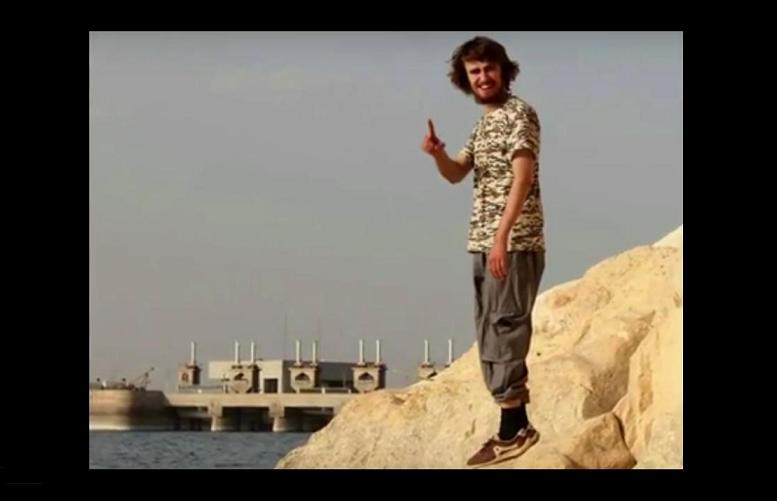 Jack Letts, the young man suspected of being the first white Briton to join Daesh in Syria, has been defended by his family who deny that he is a militant. Letts, sometimes cruelly nicknamed ‘Jihadi Jack’ in the media, had in late-January, publicly denied that he had been radicalised. So islamophobic has been the reaction of the authorities, that his parents have now revealed that they were arrested for trying to send him money for new spectacles.

The widely-circulated allegations in the media against Letts began when photographs surfaced on Facebook of him supposedly in Raqqa, Daesh’s declared ‘capital city’. In one photograph – see featured image – Letts is seen making the ancient gesture of Shahadah (‘I bear witness to the oneness of God’). The gesture is very commonly used among Muslims, but has been adopted by some radical Islamist groups as a formal salute.

Letts converted to Islam some while before travelling from his native Oxford to Syria in 2014. A few journalists appear to have put two and two together and come up with twenty-two. Without checking their sums, they then published their speculations and created a small furore. They further wrote that Letts had married while in Syria, fathered a son, and goes by the name ‘Abu Mohammed’.

Letts’ own response in January to this, apparently unchecked, media calculation was withering. On social media, he wrote,

The formula with the media is simple: English guy became Muslim + went to the Middle East + followed Islam = ISIS + eats babies x evil… Maybe they got bored worrying about what colour socks certain celebrities wear and took out the frustration on me?

It may indeed just have been a shortage of ‘celeb’ trivia, or it may indeed have been a speculative ‘scary-Muslim-bogeyman’ story. The story could be one or the other, but one thing it was assuredly not, was convincing.

Just for the record, Letts has changed his name, but only to Jack Ibrahim Letts. ‘Abu Mohammed’ is quite a generic name in Islamic culture, and that alone makes the rumours connecting him to Daesh sound doubtful. Letts’ putative ‘son’ was said to be named ‘Muhammed’ as well, which again is so generic that it borders on a cliché. In other words, the story sounds like it was made up by someone with only a very rudimentary knowledge of Islam.

Letts’ parents, in speaking up for their son, revealed to Channel 4 News that he suffers from obsessive compulsive disorder (OCD). He has complained to them of frequently feeling cold and hungry, and needing new glasses. Which is why they tried to send him money.

That they were arrested for the attempt under the Terrorism Act shows how the islamophobic hysteria in this country remains at an unhinged level. But it also shows just how easily the anti-terrorism laws introduced to the UK over the last fifteen years can be abused. The parents are currently on bail until 17 February, and have not yet been cleared of links to Daesh.

Letts’ mother, Sally Lane, states that the police have found no evidence whatever that her son has been radicalised.

We’ve directly asked him. I know people will say ‘he’ll lie to you’, but we know he won’t lie about his religion because anything to do with his religion he thinks he’ll go straight to hell. I think if he was a fighter, Jack’s the sort of person who would tell us, and most of the people out there who are fighting are quite open that they’re fighting.

Jack’s father, John Letts, is also confident that his son has not been radicalised by Daesh. In fact, he argues that conversion to Islam has done Jack a power of good in his struggles with OCD.

Islam gave him a lot of comfort. He was really concerned about thousands and thousands of people dying of starvation and being barrel bombed in Syria. So am I, and if that makes you a radical, then I’m a radical.

Another relative of Letts has gone as far as to describe the media allegations as ‘an avalanche of misinformation.’

95 per cent of what has been published is incorrect, it is desperately wrong.

Of course, Jack Letts’ presence in Syria may need some explaining, especially as he claimed when departing the UK in 2014 that he was heading for Kuwait to learn Arabic. But his mother once again is quite forthright with the explanation.

We spoke to him yesterday and he said he had never had a weapon in his life. He went out there for humanitarian purposes to help kids in Syrian refugee camps.

In that light, it stands to reason that he would have initially concealed his true reasons for travelling. As a fairly recent convert to Islam, had he let it be known he was heading for Syria, he would have been arrested before he could set off. A cover story was therefore needed, even if, as appears the case, his intentions were benign.

Letts’ detractors point out that he has been quoted as saying that he thinks David Cameron is ‘an evil creature’, and is heavily critical of the US-led bombing of Syria. However, both of these views are clearly held by many, many people in the UK. Many of whom are not even Muslims, let alone Radical Islamists. So the views are certainly not evidence of Daesh sympathies; some might argue that they are evidence of a man who is well-informed.

In summary, the whole ‘Jihadi Jack’ narrative looks like yet another irresponsible attempt, chiefly in the right wing press, to whip up irrational fear. Smearing the reputation of an innocent and benevolent young humanitarian was clearly a small price to pay for the renewed anti-Islamic mouth-foaming the right wing so desire. But then the right wing always seems to have a problem with kindness.

One would hope that the story has now been set straight. But it seems more likely, especially in the current climate of islamophobia, that the damage has already been done. If so, when Jack Ibrahim Letts comes home, he can expect an unfriendly welcome from many.

– You can support sufferers of OCD by making a donation to OCD-UK
– If you see newspapers continuing to spread the unsupported allegations against Jack Letts, you can report them to the Press Complaints Commission
– You can support volunteers like Jack Letts in their efforts to help refugees by donating to the Red Cross.