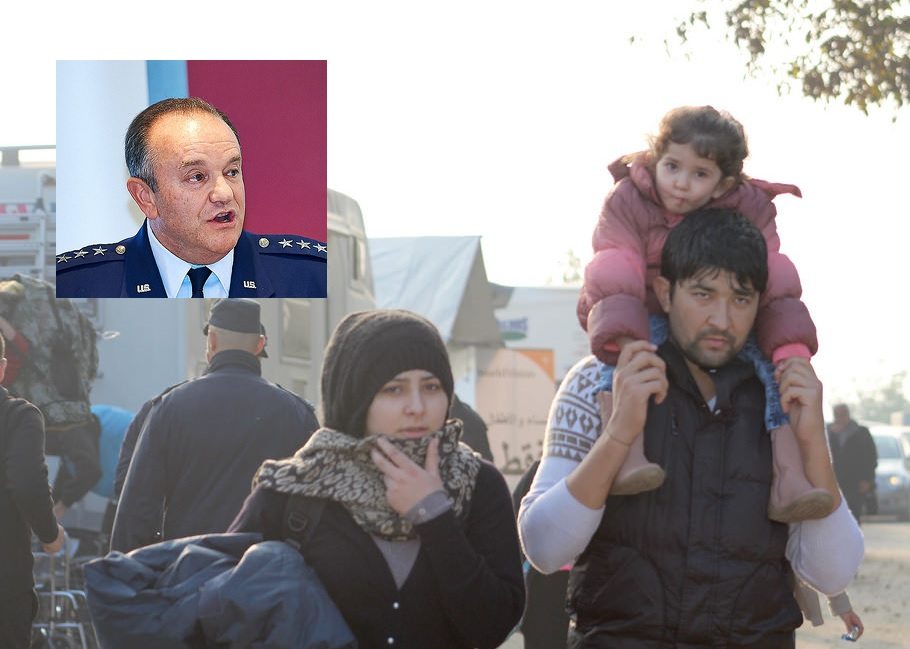 NATO’s top commander, US general Phillip Breedlove, has tried to crush the public’s concern over the refugee crisis in one fatal blow. On 1 March, Breedlove told the US Congress that ISIS (Daesh) is spreading “like a cancer” among refugees. This inflammatory language seems designed to incite distrust of the refugee population. But Breedlove is right, there is a tumour. It’s the fear-filled one he’s trying to grow in us. And it will spread, if we let it.

Of course, Breedlove’s claim that the refugee flow is “masking the movement” of terrorists, could have some validity. But without evidence, his argument has no more weight than that of Bill Frelick, director of the refugee rights programme for Human Rights Watch. Frelick says that the problem only amounts to “needles in haystacks”. He clarifies:

It’s not to say that there aren’t dangerous needles in those haystacks, but overwhelmingly we’re talking about people who are seeking protection and bear no ill will

Or, António Guterres’ claim, the UN High Commissioner for Refugees, that:

It is not the refugee outflows that cause terrorism, it is terrorism, tyranny and war that create refugees

So, what does Breedlove have to back up his claim? According to the Guardian, not much. He responded to a call for evidence, from reporters, with the following:

I can’t give you a number on the estimate of the flow.

Breedlove does attempt to give some figures, relating to “foreign fighters”, but this just serves to muddy the waters. He gives no figures for terrorists. So, it’s hard to conceive how he came up his alarmist ISIS “cancer” claim, without even an estimate to go on. Or perhaps “can’t” here means “won’t”. Breedlove allegedly also said “I’m not going to talk to you about intelligence”, at the news conference following his Congress appearance. This is typical behaviour in the National Security ranks; making a statement on something, but saying they cannot reveal the evidence behind the claim. The expectation is that the public will accept the assertion as true, and that withholding evidence is warranted, when it comes from officials in these classified quarters.

But, unfortunately for General Breedlove, our brains are hardwired to question hypothesis’ without proof, especially in a post-Iraq war world. Information is power, and if it’s not provided, most words have none.

However, when it comes to the link between the refugee crisis and terrorism on our shores, there is plenty of evidence. Evidence that suggests very few terrorists are entering alongside refugees. We know, for example, that the Charlie Hebdo attackers were French nationals, not refugees. We know the Paris attacks were mostly carried out by European citizens, not refugees. We also know that the San Bernardino shooters, who killed 14 people at a social services centre in California, were not refugees.

And aside from terrorism, we know that – despite the initial media speculation – of the scores of people arrested following the Cologne assaults, only three were recently arrived refugees.

We can also be pretty sure that Breedlove’s comments are going to exacerbate the already disturbing levels of threatening, and violent, behaviour towards refugees. And they will likely contribute to the rising levels of Islamophobia across the developed world. His claims may also provide excuses for states to build up their borders. They will be able to seize on this to keep out the “swarm” of people desperately fleeing their shattered countries, as David Cameron so callously describes them.

It is dangerous for a high-ranking official to use his platform to make such provocative assertions. Although, as we recently reported, NATO’s behaviour of late has tended to err on the side of recklessness. There may be some truth to his claim, but terrorists determined to enter Europe will make attempts to do so, with or without this humanitarian crisis. Breedlove’s dramatic exaggeration of the level of risk will help no-one. Not refugees, the public, or the general path to peace. But then, peace is not really what NATO is all about.

Write to your MP to ensure they insist David Cameron fulfils his pledge to take in 20,000 refugees