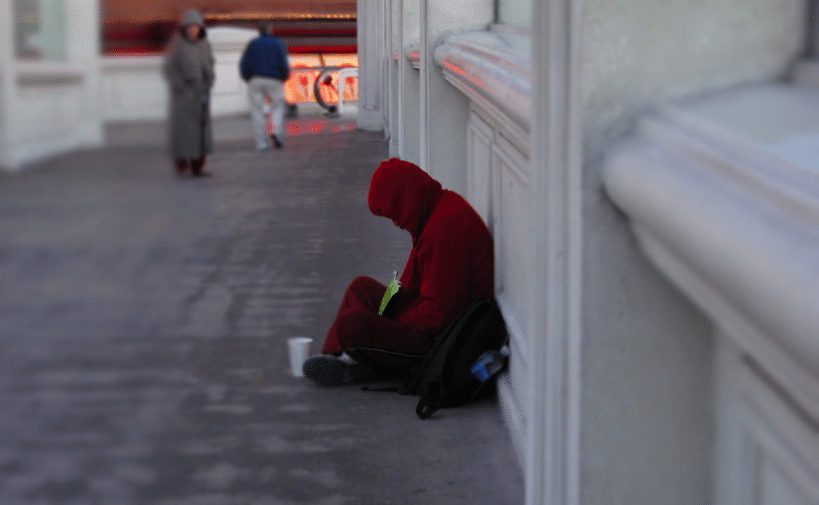 A furious Judge has thrown out the case of a homeless man arrested for begging just 10 pence, saying it is ‘not in the interest of justice’ to proceed with a prosecution.

Ashley Hackett is a familiar face among the homeless community of Brighton, East Sussex. The 34-year-old is one of around 90 people who sleep rough in the seaside town on an average night, a figure that is on the rise. But while services to support people who find themselves in poverty and unable to find shelter are being cut, Sussex Police have launched a plainclothes sting operation that is responsible for jailing at least one homeless person a week.

As per the usual sting, one plainclothes officer (PC Andrew Platt), and an un-uniformed off-duty officer (Sergeant Richard Siggs) approached Ashley Hackett on the Western Road, and arrested him for asking a passerby for 10 pence.

The case of Ashley Hackett was picked up by local and national campaigners as the perfect example of the wrong-headed approach to dealing with poverty, addiction and homelessness in UK cities. More than 30,000 people signed a petition demanding the charges against Ashley Hackett be dropped. This produced additional media attention and even a debate in parliament.

This action may have influence the Crown Prosecution Service, who later withdrew their support for the case. As CPS spokesperson Jane Deakin told The Argus:

“Begging has become particularly sensitive at the moment, in our view as he has pleaded guilty to refusing to submit to a drug test in custody, we would say it is not in the public interest so we will be presenting no evidence with respect of the begging case.

“I have spoken to Sgt Siggs who is in charge of liaising with homeless individuals and he is keen to see this individual receive the treatment he needs.”

District Judge Teresa Szagun seemed baffled that the case had ever been brought to court, and agreed that it was simply “not in the interest of justice” to proceed with the prosecution. She railed against the increasing number of homeless people being criminalized in the city. As The Argus reports:

He is just one of more than 16 defendants called before Brighton Magistrates’ Court in the past two months. A total of 62 were arrested last year.

The cases will have cost the public purse more than £16,000.

The cases come amid the wider plight of homeless people whose poverty is being criminalised, rather than alleviated. One particularly emblematic case is that of Daniel Gauntlett.

The 35-year-old homeless man froze to death in February 2013 on the porch of an empty bungalow in Aylesford, Kent. He was on the porch because if he had entered the bungalow he would have been in breach of new ‘anti squatting’ laws.

Six months previously, the UK Parliament passed legislation which made it possible for the police to immediately evict anyone found squatting. Since then, there had been thirty three arrests, leading to ten convictions and three prison sentences. None of these court cases involved squatters displacing existing tenants, all of the properties involved were completely empty.

Daniel Guantlett had been one of those arrested, for sleeping in the disused bungalow on a previous occasion.  This bungalow was empty, and was due to be bulldozed.

On this particular night, Daniel chose to obey the law and settle on the porch for the night, whilst temperatures dropped to minus 2 degrees.

This decision to comply with the law cost him his life.

His frigid body was found by a passer by the following day and an inquest later confirmed he had died of hypothermia. To add to the tragedy, Daniel was the second homeless man found dead in the town that weekend.

Despite these increasingly cruel and hurtful policies, homelessness has risen over 50% while David Cameron has been Prime Minister. Proof, if it were needed, that the government cannot eradicate poverty by criminalising it.

Find out how to help from homeless charity Shelter here.