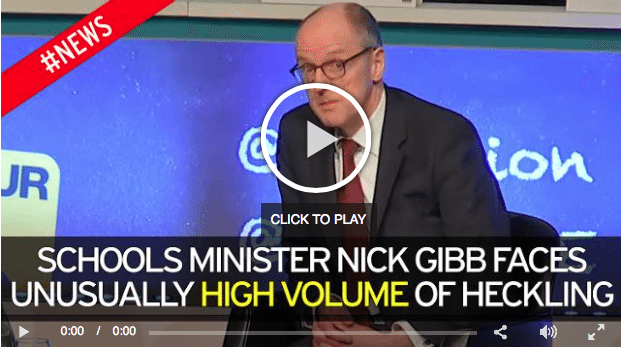 Conservative minister for schools, Nick Gibb, has been heckled with force and creativity by an audience of teachers who were unimpressed by his attempts to sell them the ideas of forced privatisation of state schools.

One delegate shouted the swear word as the Tory minister struggled to defend the government’s controversial move to turn all schools in England into academies.

Another said he was talking “total crap” as he spoke at the annual conference of the Association of Teachers and Lecturers (ATL) in Liverpool.

The normally polite and mild-mannered delegates could hardly contains themselves as Mr Gibb took part in a question-and-answer session.

As he trotted out the government’s line on education policies delegates were in fits of laughter and some jeered and heckled.

The teachers’ wrath is based on the astounding decision by the government to effectively privatise every state school in England, by forcing them to become academies. As my colleague James Wright explained when the news broke in March:

The Conservatives are set to force every mainstream school in England to become an academy, reports the BBC.

Ultimately this will result in huge sums of money being transferred from the taxpayer to the unaccountable private sector, through under-the-radar profiteering. The beneficiaries also happen to be brimming with Tory party donors and members of the House of Lords. This money is being extracted from our children’s education.

This decision has driven teachers not only to heckle the Conservative schools minister, but also to consider joint action with Junior Doctors over the summer, in efforts to unify public sector opposition to government moves to privatise health and education. It would appear the Conservative government is now fighting on all fronts, for a privatisation agenda that even many of their MPs, members, and voters cannot get behind.