This Prime Minister just resigned over the Panama Papers, Cameron could be next (VIDEOS) - The Canary 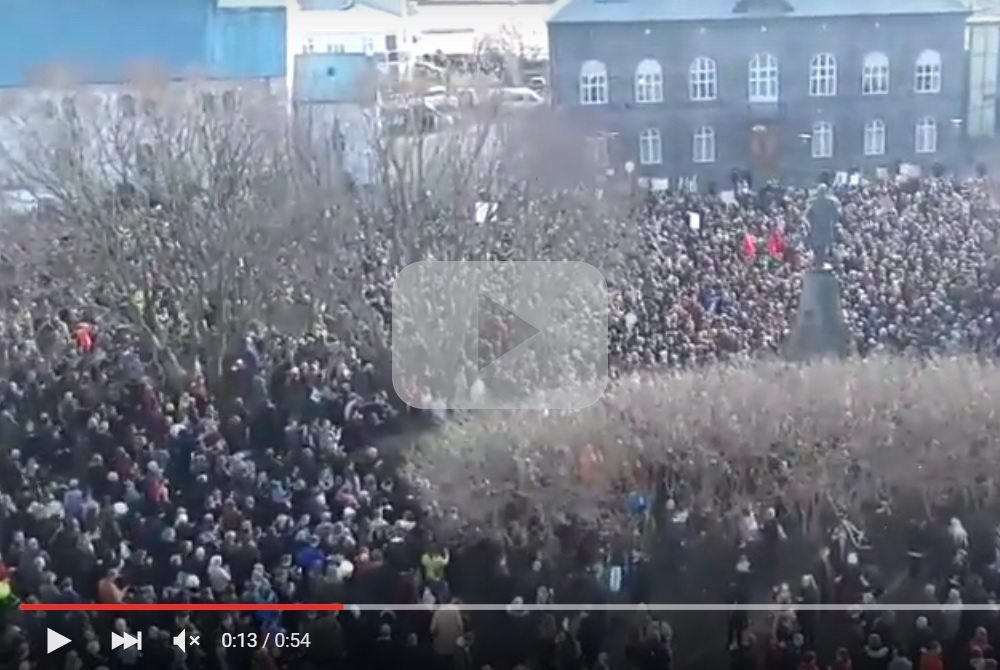 Iceland had a strong recovery after the 2008 global economic meltdown because it allowed its banks to fail, and punished those involved in the crisis. But all is not well on the island, as the ‘Panama Papers‘ leak revealed on 3 April 2016.

The country’s Prime Minister was linked to a secretive offshore company, and the Icelandic population was not happy about it. Thousands called for him to step down, and he has now obliged. Back in Britain, meanwhile, the hunger for new elections is getting stronger and stronger.

Political elites are unsettled, but stubborn

The Panama Papers data leak revealed Iceland’s Prime Minister Sigmundur Davíð Gunnlaugsson as one of the world’s political leaders to have been directly involved with offshore companies. His was designed to hide away millions of dollars of investments in major Icelandic banks.

Gunnlaugsson and his wealthy wife, Anna Sigurlaug Pálsdóttir, set up a company in the British Virgin Islands in 2007 called Wintris Inc.. This company held nearly $4m in bonds in the three major Icelandic banks. Gunnlaugsson sold his 50% share to Pálsdóttir for just one dollar at the end of 2009.

In 2008, Gunnlaugsson participated in a campaign against bailing out the banks after the Icelandic financial crisis. This helped him to enter into parliament in 2009, and he became the nation’s youngest prime minister in 2013. But he never disclosed his involvement with Wintris.

When questioned about this, he had the following response:

Banks, hope, and disillusionment in Iceland

Much media coverage about Iceland since 2008 has focused on the way it recovered from the crisis caused by the world’s financial elites. True Activist, for example, circulated the following meme online in early 2016: 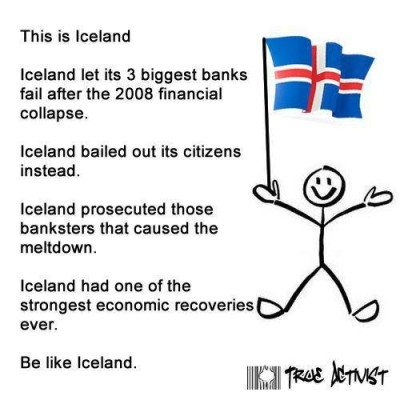 And this is very much representative of what happened. In October 2015 alone, for example, 26 bankers were sentenced to a combined 74 years in prison. Their manipulation of Iceland’s markets after the country deregulated its financial sector in 2001 was deemed to have caused the island’s banking meltdown in 2008.

But blogger Alda Sigmundsdóttir reminds us that not all is well on the island. Young Icelanders have nowhere to work and nowhere to live, she says, and are disillusioned with the political establishment. The current government, meanwhile:

This may be why the opposition Pirate party – which was formed by activists, poets, and hackers in 2012 and advocates 35-hour working weeks, loosened drug regulation, and greater public participation in politics – recently polled at around 38%.

Mass protests, calls for a snap election, and a high-profile resignation

According to the Guardian, opposition leaders in Iceland immediately discussed a motion which would call for a general election in the light of the Panama Papers revelations. These figures said Prime Minister Gunnlaugsson had hidden a major conflict of interests from voters since entering parliament in 2009.

Gunnlaugsson insisted on 4 April that he would not step down. But on the same day, a huge proportion of the country’s citizens gathered in protest, demanding his resignation:

Over 22.000 protesters confirmed in the square. Nearby streets full. That's 10% of all voters! #Iceland #panamapapers #cashljós

These protests had an instant impact. On 5 April, the Prime Minister resigned, under apparent pressure from members of his governing coalition. A snap election may now follow.

Will Cameron face a similar fate in the UK?

In Britain, anger towards the Conservative government has reached new heights in recent weeks. In March, a satirical petition from The Canary (in favour of preventing David Cameron’s re-entry into the UK) gained more support from the British public than the Prime Minister directly received in the 2015 elections. Discontent is clearly rife, and the government has got on the wrong side of both doctors and teachers, whilst so far failing to protect the jobs of thousands of steelworkers.

Now, in the wake of the Panama Papers revelation that David Cameron’s millionaire father was involved in secretive offshore tax schemes, a new petition calling for a snap UK election has been signed by over 15,000 people. The petition says:

This government is the most ideologically-driven and morally bankrupt in living memory. From scathing cuts to the most vulnerable of us, to the disregard for those fleeing war; from the sweeping destruction of local services, to soundbite kneejerk policies to satisfy the basest fears of society.

The British people deserve the right to vote now to let Westminster know how we feel.
Call for a Snap General Election now!

– Sign the petition mentioned above, and show Cameron’s government that you aren’t prepared to see it in power for four more years.