Jeremy Hunt closed his door to junior doctors, so they're literally camping outside it (IMAGES/VIDEO) - The Canary 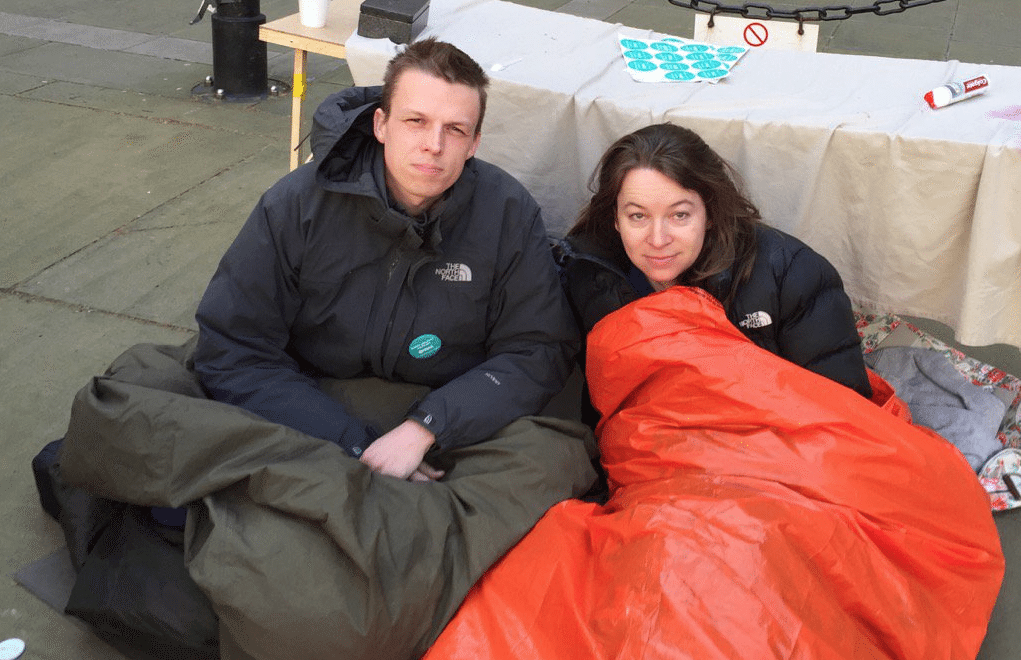 A group of junior doctors are now camping outside the Ministry of Health in efforts to encourage Health Secretary Jeremy Hunt to resume talks and avoid planned strike action.

There is an ongoing crisis unfolding within the NHS, which is being exacerbated by the Conservative government. As my colleague Bex Sumner wrote earlier this year:

The NHS is in the middle of both a staffing crisis and a financial crisis. Across the country, tens of thousands of doctor and nursing posts remain vacant. Hospitals find themselves unable to fill their rotas, meaning that remaining doctors and nurses have to work extra shifts to cover the gaps. While thousands leave the profession – or the country – many of those who remain are depressed, exhausted and burnt out.

On top of this, Jeremy Hunt is planning to make things even worse my imposing new and unfair contracts on junior doctors which reduce their pay and increase their hours. Not only is this a bad deal for doctors, but for patient safety too.

After Mr Hunt ruled out the possibility of further talks, the doctors are now literally sleeping on the street outside his office overnight, in a bid to bring him back to the table. A table they have set up, even providing him with his own chair.

The mainstream media seems to have mostly overlooked the occupation, (with the notable exception of the Independent) seemingly taking sides with an intransigent government over NHS staff. Meanwhile on social media, the images were being shared and circulated by a supportive public at the hashtag #TimeToTalk.

Dr Rachel Clark and Dr Dagan Lansdale nestled into their sleeping bags outside the Ministry of Health on Wednesday night, tweeting at Jeremy Hunt to come outside to speak with them.

I'm willing to sleep on the streets to stop this strike. All you have to do is talk, @jeremy_hunt. #timetotalk pic.twitter.com/rLltr63WaX

The pair continued to live-tweet their experience of sleeping rough throughout the night.

We'll be here all night @Jeremy_Hunt. Its #timetotalk @doctor_oxford pic.twitter.com/YqkChIXhFM

Still no sign of him outside Dept of Health… Jeremy Hunt refusing to negotiate with #juniordoctors #wheresjeremy? pic.twitter.com/Jz4X21OtxE

So, the team were replaced by fresh recruits and will continue to be until Mr Hunt comes to speak.

Time for handover Mr Hunt. These guys will be here all day pic.twitter.com/oPyQpQe6Ta

But while Mr Hunt was rumoured to have slipped out the back door in order to avoid the doctors, others came by to show their support.

Met junior doctors outside Department of Health who wish to talk with the Health Secretary! #HuntHunt #timetotalk pic.twitter.com/v7KscCvtyZ

It is a truly sorry state of affairs when a government becomes so far removed from the people affected by their policies, that such extreme measures have to be taken to force the issue. As Dr Clarke explains:

I’ll be honest. My most militant act at home recently was staying up beyond midnight watching Parks and Recreation, with an actual cup of tea in my bedroom.

So why on earth have I just started a permanent protest outside the Department of Health, sitting in position at a table outside until Jeremy Hunt agrees to re-open talks? Why have I decided to stay there for 24 hours at a time, before swapping in other doctors to carry on the protest in 12-hour stints?

Because, in many ways, having Jeremy Hunt as my Secretary of State has begun to feel like dating the Wolf of Wall Street.

She runs through the litany of issues at play in the NHS today, which are dragging down staff morale and standards of care. Yet, instead of working with junior doctors to resolve these issues, the experience of NHS staff is that Mr Hunt is ploughing on regardless.

That’s right. Two weeks before the UK’s first ever all-out doctors’ strike, Mr Hunt’s response to the crisis has been to close off any hope of dialogue with the curt statement that his door is now firmly ‘closed’.

And so, the junior doctors that have undergone seven years of training to earn their posts and perform some of the most critical duties in the NHS – are forced into a position of an all out strike, and the occupation of the Ministry of Health. The Canary supports our junior doctors, and so should anyone who believes in the future of the NHS.

Join the People’s Assembly March on Downing Street to call for the resignation of David Cameron on Saturday 16th April.