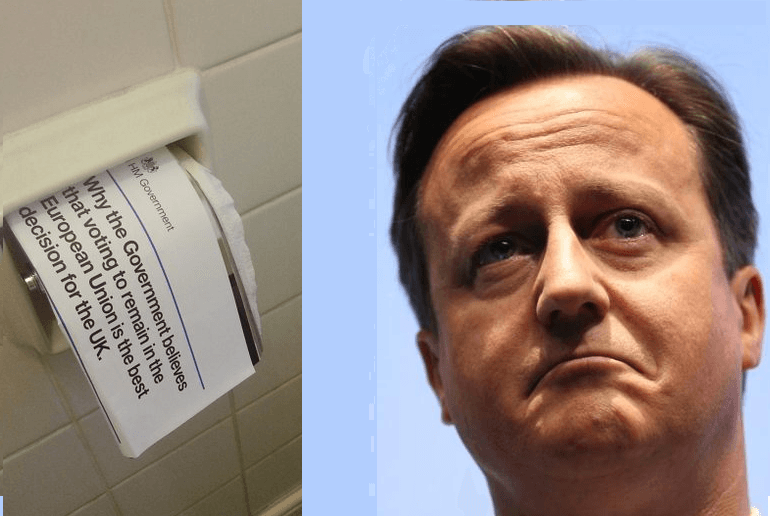 David Cameron further enraged Brexit supporters by spending a whopping £9.3m of taxpayer cash on pro-EU propaganda. Now the Brexit camp have got creative with Cameron’s “outrageous” leaflets – which are being sent to 27 million homes:

Brexiters are right to be angry. Funnelling cash out of the public purse for pro-EU propaganda is at odds with the economic democracy vital to a fair EU referendum. The leaflet is also at odds with the reality in the Conservative party. It suggests the government is a unified front on the referendum: 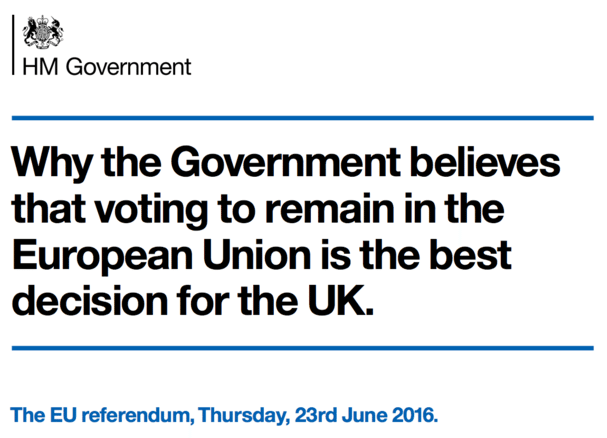 In reality, the government is thoroughly divided on the EU: 130 MPs, including seven of the Prime Ministers own cabinet members, have declared their commitment to Brexit.

Brexiters took to Twitter to express their views on the leaflet:

Ouch. We’re not sure this was what Cameron intended either:

Others had the same idea:

Too shiny, so I sent it to Tory HQ, no stamp. Send it to no. 10 and taxpayer just pays again. #senditback #EUleaflet pic.twitter.com/ut8No2KjMP

A trend has started:

I didn't want to just bin my EU Leaflet so I've put it to good use. #EUref #Brexit #EUleaflet pic.twitter.com/ELEZ5TEJH5

‘Emperor Longshlong’ is not holding back:

This man’s dog was happy to receive it:

The question is, why are six being delivered to one household? According to the Daily Mail, some postmen are rebelling and dumping the leaflets. This man found his hidden inside a Specsavers ad:

Considering a ‘poll of polls’ showed the country is split down the middle on Brexit, many postmen may not be happy delivering the propaganda. Although even those who support remaining should object to the letters. Trying to gain an anti-democratic edge tarnishes the Remain camp.

Poor Cameron. This one really burns:

On Wednesday, Jeremy Corbyn condemned the leaflets, saying the public would like a “more even approach”.

The EU referendum debate has been muddied by ‘aspirational’ Conservatives jousting to succeed Cameron. Blue versus blue means we get the same unsubstantiated propaganda from both sides. We have Cameron saying Brexit would be a risk to our national security and Iain Duncan Smith saying the opposite. It is difficult to make an informed choice when it has descended into the Tory show.

In some regards, the EU referendum is a non-issue for those who want progressive economic change. For those who want an end to the economic orthodoxy of neoliberalism, neither Brexit nor remaining provide an answer. Neoliberalism is an economic approach characterised by unregulated (‘liberal’) financial markets, privatisation and the stripping back of government spending. And both the Conservative government and the EU support this orthodoxy.

Many say we should leave because of the US-EU ‘free trade deal’ the Transatlantic Trade and Investment Partnership (TTIP). Joseph Stiglitz, a Nobel-prize winning economist, said we could be better off out for this reason. But considering the UK government avidly backs TTIP and is close to the US, Brexit would likely only make it easier for the government to draw up a US-UK version. Additionally, a lot of the resistance to TTIP is coming from EU member states, with powerhouse Germany seeing a 250,000 strong protest against the deal.

People see TTIP as a corporate power grab. The Investor State Dispute Settlement (ISDS) is the most controversial element of TTIP. It allows corporations to sue governments or public bodies before an arbitral tribunal, for policies that are perceived as harmful to their profits. An ‘arbitral tribunal’ is an international hearing, out of the courts and behind closed doors, which decides how much money these companies should get.

It’s very difficult to say whether Brexit or remaining would do the most to tackle TTIP and the Neoliberal orthodoxy. But whatever one’s position on the EU, Cameron’s leaflets are at odds with democracy. These responses on Twitter are not only hilarious but well justified.

Write to your MP to express yourself here.

@TheCanarySays your own creative response.