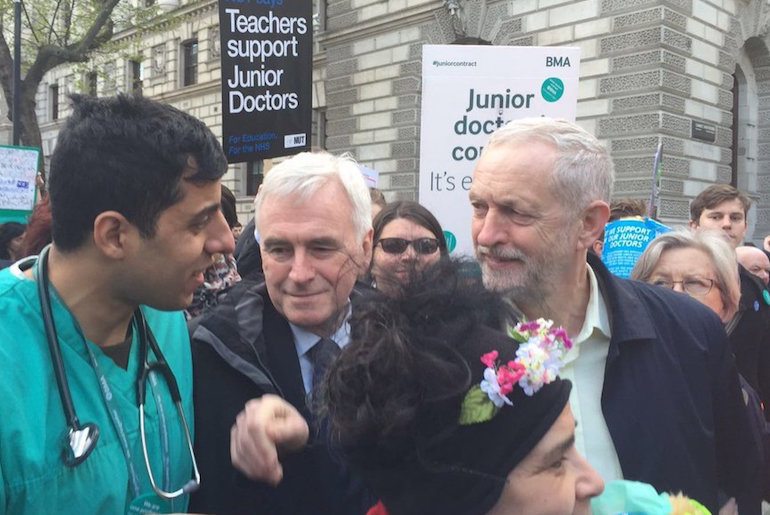 Just minutes after junior doctors finished their first all-out strike in the history of the NHS on Tuesday thousands of them marched from St Thomas’ hospital in London to Whitehall. Leading the march were Labour Leader Jeremy Corbyn and Shadow Chancellor John McDonnell.

Corbyn was cheered as he took to the stage to tell the doctors:

Today we are here to show our support for them [junior doctors] and our National Health Service and say to Jeremy Hunt, the NHS is absolutely safe in the hands of those who work in it – the junior doctors who work day in, day out to keep us all safe and healthy. It’s not safe in the hands of a government that is more interested in attacking those who work in the NHS, selling off its assets and destroying the very principles of our National Health Service.

Thousands of junior doctors and teachers were among those marching to Jeremy Hunt’s office at the Department of Health in Whitehall to protest his imposition of the junior doctors’ contract and tell him it was time to talk. But, while Jeremy Corbyn, John McDonnell and Green Party MP Caroline Lucas were among the protestors, the other Jeremy – Health Secretary Jeremy Hunt – was nowhere to be seen.

Protesters sang “Where are you, Jeremy?” and Corbyn told the crowd “not all Jeremy’s are bad” and demanded that Hunt “come out of hiding”:

[He has] had every opportunity to negotiate an agreement for the junior doctors… They are the ones who have behaved in a responsible manner, to say they are here to defend the NHS. His response is to try and impose a contract on them. That is no way for a Secretary of State to behave towards one of the most crucial elements of the NHS workforce… The government has an opportunity to settle this, they should get on and do so.

At Dept of Health, protestors shouting 'Where are you Jeremy?' #JuniorDoctorsStrike pic.twitter.com/LobcvebAuW

NHS staff hit the streets. Only Cameron and Hunt could have done this. Politics before patients #JuniorDoctorsStrike pic.twitter.com/Wrdhn1gORX

Lifeblood of NHS – they have a wealth of experience & education that's an asset to our country #JuniorDoctorsStrike pic.twitter.com/fVOjEfTRJO

78% of doctors in England took part in Tuesday’s strike, the first of a two-day action by doctors. Hospitals reportedly coped well during the strike, as other staff worked longer hours to support their colleagues:

Ahead of the strike Jeremy Hunt preemptively tried to blame junior doctors for risking “the safety of many patients”. However, public opinion still firmly sides with the doctors and Corbyn over Hunt; an Ipsos Mori poll for the BBC found that the majority of the public supports strike action by junior doctors, and 54% blame the government for the dispute while just four percent blame junior doctors.

It’s not hard to see why. Right now the junior doctors are the only thing standing between the Conservative government and the privatisation of the NHS. But with paramedics and teachers considering joining the strikes, and the Leader of the Opposition standing shoulder to shoulder with the doctors, the government has a battle on its hands – and it’s a battle it seems to be losing.