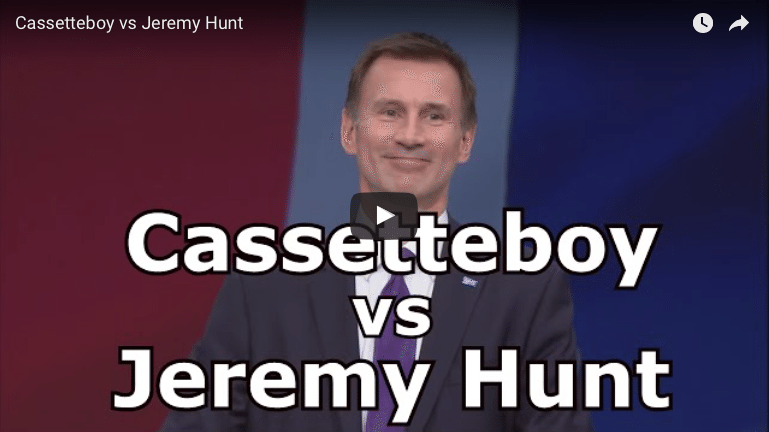 Lip sync and mash up artist CassetteBoy strikes again this week in support of junior doctors in their battle against Health Secretary Jeremy Hunt.

CassetteBoy uses speech excerpts from Jeremy Hunt to create a revised version of the Village People classic ‘YMCA’, turning it into ‘My NHS’.

The Health Secretary is under pressure this week as junior doctors mount a full strike to prevent Hunt’s imposition of a contract which demands longer hours and less pay for some of the most talented and committed workers in our NHS. As my colleague Carlyn Harvey explained in a report earlier this week:

On Monday 25 April, Jeremy Hunt spoke in parliament about the junior doctors’ strike. His speech was loaded with facts and figures designed to flummox supporters of the medical workers’ action. But a key admission in Hunt’s discourse exposed the real source of his ire: it’s not the doctors at all, it’s those charged to protect their rights.

Hunt defended his dismissal of the cross-party solution, and his government’s combative role in the junior doctors’ dispute, saying:

No trade union has the right to veto a manifesto promise voted for by the British people.

This is typically skewed wording by Hunt. So, let’s break it down. The “British people” Hunt refers to is the less than 30% who voted for the Conservative party in the 2015 general election. And those people may have supported the Tories’ “manifesto promise” on the NHS, but at that point they had no idea it would conclude with enforcing unworkable contracts on all junior doctors.

In response, CassetteBoy – infamous for a string of successful videos which have captured the hearts and minds of the nation across the political divide – produced a video which will no doubt leave the Health Secretary more than a little red-faced. It should also come as welcome encouragement to NHS staff who are experiencing unprecedented levels of public support in their fight.

Write to Jeremy Hunt to let him know your views on the junior doctors contract.