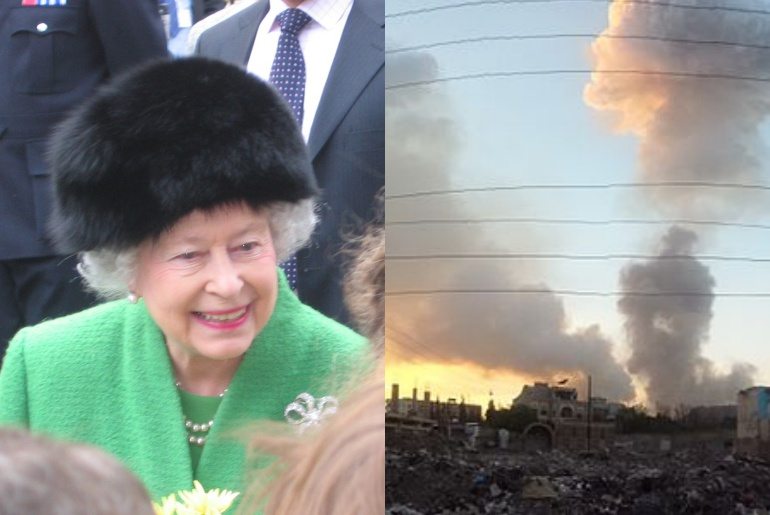 The Queen’s recent four-day birthday celebration was made possible by the support of arms companies and countries which violate human rights.

Over 1,500 people attended the event, which was broadcast live as celebrities such as Gary Barlow and Kylie Minogue joined in the ‘celebrations’.

However, the event has now come under fire after it was revealed that its sponsors included BAE Systems (the world’s third largest arms company) and Rolls-Royce (the 14th largest weapons sellers). The event was also funded by Bahrain, Azerbaijan, and Oman – all countries known for their human rights abuses.

BAE Systems have a lucrative part of the £2.8bn arms sales which have been made to Saudi Arabia since its devastating bombing of Yemen started in 2015. But they don’t only sell Saudi Arabia war planes. They also have 5,700 employees based in the country to offer operational support, which includes support for the air force.

Criticism was also levelled at the Queen’s celebrations over the decision to seat the monarch next to the King of Bahrain. Following the brutal repression of the uprising there from 2011 onwards – which was aided and abetted by Saudi Arabia and BAE Systems – Amnesty International says Bahrain has “continued to curtail freedoms of expression, association and assembly and cracked down further on online and other dissent”.

King Hamad presumably enjoyed his ringside seat at the Queen’s birthday bash, but the disturbing reality for people back in Bahrain is a never-ending cycle of arrests, tear-gas raids, torture in detention and long prison sentences for peaceful protesters.

The sponsorship of the event was highlighted by a message left in the official commemoration book which read:

This celebration could not have been possible without the support of generous individuals and organisations.

BAE Systems, Bahrain and Oman were then listed, among others, as supporters.

Speaking to The Canary, Andrew Smith from Campaign Against Arms Trade said:

For decades now BAE has enjoyed a politically intimate relationship with the UK establishment, and this only highlights the extent of it. People are being tortured in Bahraini prisons, and yet the regime that has inflicted these abuses was given the red carpet treatment.

Whatever people think think of the Windsor family, I’m sure we can all agree that it’s disgraceful that a supposedly apolitical event was used as a propaganda vehicle for dictatorships and Europe’s biggest arms company.

Given the sponsorship and seating arrangements of this event, it appears that the Queen’s birthday was nothing more than a charade for bolstering relationships and sales between human rights abusers and arms companies which do not care who they sell to if they can make a profit.

These companies are supporting war and destruction across the globe. But while they’re powerful multinational corporations, we can take action against them.

– People can disrupt arms fairs ,  shut down factories and together we can make a difference.

– Support Campaign Against Arms Trade and Stop the Arms Fair and get involved in future actions against the arms trade.

– Pledge to take action against the massive London arms fair when it returns in 2017.