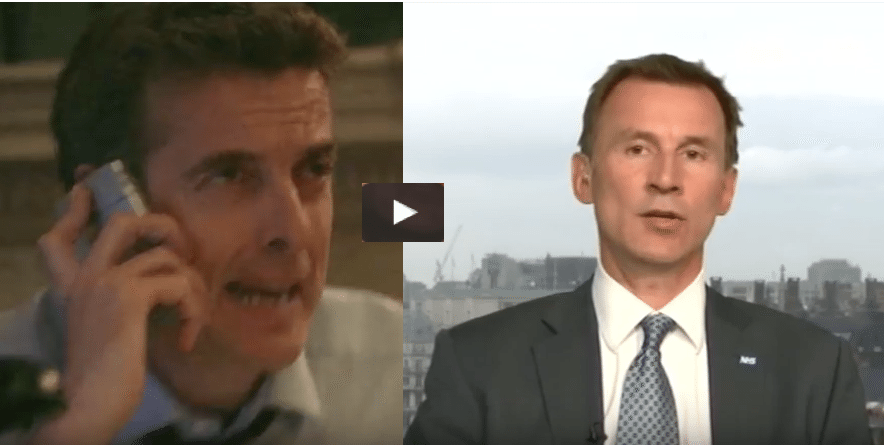 Earlier this week, Channel 4 News veteran Jon Snow gave Health Secretary Jeremy Hunt a complete mauling over his appalling mishandling of the junior doctors dispute. To add to his blushes, the interview has now been cleverly edited into a scene from BBC 2’s classic political comedy ‘The Thick of It.’

Hunt appeared on Channel 4 News after the announcement that a deal had been reached in the dispute. As James Wright reported for The Canary on May 19:

The Health Secretary and the British Medical Association (BMA) have agreed upon an amended version of the new contract for the nation’s 55,000 junior doctors. As The Independent summarises:

The new settlement is based on a compromise on weekend pay, which will see doctors who work more than six weekends in a year earning salary top-ups that will increase the more weekends they work.

New measures to support doctors returning from maternity leave and increased pay premiums to attract doctors to understaffed specialties such as emergency medicine are also included in the new package.

However, the amended contract will be put to a referendum among BMA members – so it could still be wholly rejected. And the BMA is facing a growing backlash from the junior doctors themselves, as the new deal is branded a “sell-out” and a “joke”.

As Hunt tried to claim the deal as some sort of victory, Snow was having none of it. And now the disastrous interview has been memorialised in this mash up with ‘The Thick of It.’

The genius behind all this is video editor Chris Presswell. Noticing that the interview was likely to dovetail neatly into a well-remembered scene from ‘The Thick Of It’, he thought he’d put it together himself – and it is fabulous.

After months of being brow beaten by an intransigent and dishonest Health Secretary, and with no doubt a long way yet to go, the junior doctors and other NHS staff could certainly do with a laugh.