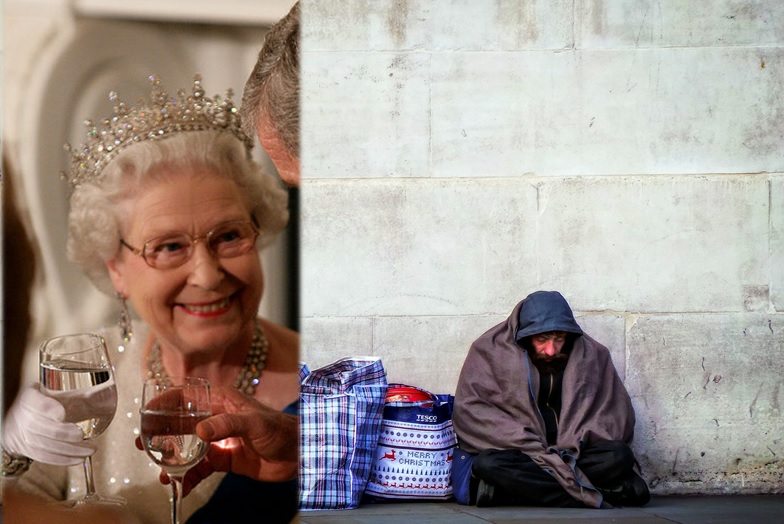 The Conservative government’s controversial Housing Bill made it into the Queen’s Speech on 18 May. But far from addressing the housing crisis, the passing of this bill represented a serious attack on social housing and the immense gulf between the UK’s rulers and their most vulnerable citizens.

Politicians often talk about helping the homeless, but you’ll never hear them talking about the ‘homeful’ – the people who’ve never had problems finding somewhere to live. The actions of the current government, however, disproportionately benefit the homeful while doing serious damage to the homeless.

Watching the Queen’s Speech was like observing the behaviour of an absentee landlord who, having allowed a property to fall into disrepair, puts up some bright new curtains and stands back, waiting for the cold and miserable tenants to express their gratitude.

She slams the Queen’s uninspiring promise that her government would “support aspiration and promote home ownership through its commitment to build a million new homes”, saying:

In the midst of a housing and homelessness crisis, a commitment to build new homes is essential. But if homes are to be built solely for the fortunate people who can afford to buy, they will not help the growing numbers of people who cannot find anywhere to live.

2015 saw tenant evictions in England and Wales reach a record high, with over 170 people being evicted from their homes every day. Housing charity Shelter, meanwhile, has blamed Britain’s lack of affordable housing on the government’s “short sighted welfare cuts“. But as Meaden points out:

The word ‘homelessness’ did not appear in the speech, so we can only assume it is not a major concern for the government.

Politics Home stresses that representatives from the National Housing Federation, Shelter, Homeless Link, and Crisis had previously made suggestions for a new ‘Homelessness Bill’, which would “require councils to prevent more people from becoming homeless”. As their proposals were apparently ignored, however, we should probably conclude that the government is simply more interested in the homeful than the homeless.

The government’s attack on social housing

The Director of research charity the Human City Institute, Kevin Gulliver, has said the Housing Bill:

represents this government’s continued commitment to expanding home ownership at any cost while directly and indirectly permitting social housing to wither on the vine.

When the bill finally passed through the House of Lords earlier in May, former housing chief Sir Bob Kerslake – who had fought hard against the government’s mass sell-off of council housing – said:

we are seeing an attack on social rented housing… [which is] advancing one group of people’s interests on middle or higher incomes at the expense of lower-income people in desperate need.

Those who have seen Channel 4’s How to Get a Council House will understand what these experts are talking about. Apart from showing the desperation that homelessness can cause in vulnerable citizens, this programme reveals how the private housing sector is receiving wads of government money thanks to Britain’s shortage of social housing. And the situation is only getting worse.

A day before the Queen’s Speech, Shadow Secretary of State for Housing and Planning, John Healey, insisted:

The example of London

In London, the Department for Communities and Local Government is aware that 50,970 households (including 83,370 children) were considered homeless in the final quarter of 2015. This was an 8% increase from the previous year at the same time.

Such demand, combined with a lack of social housing, means that councils are forced to seek temporary accommodation for citizens in B&Bs, hostels, and what the Guardian describes as “homes either directly let by private sector landlords or leased from them by boroughs and housing associations”. The latter is the biggest type of temporary accommodation.

A raft of changes to welfare provision, implemented from 2013, has reduced the degree of support available to households reliant on housing benefit to pay some or all of the rent.

without sufficient resources it is becoming harder and harder to find suitable accommodation for London’s growing homeless population.

As the example of London shows, the situation is pretty dire. And unless action is taken to drastically increase social housing provision – in the capital and throughout Britain, homelessness is likely to rise even more in the coming years.

– See more Canary articles on the housing crisis and homelessness.

– If you want government policy to change, please write to your MP. You could include the demands mentioned in this article.