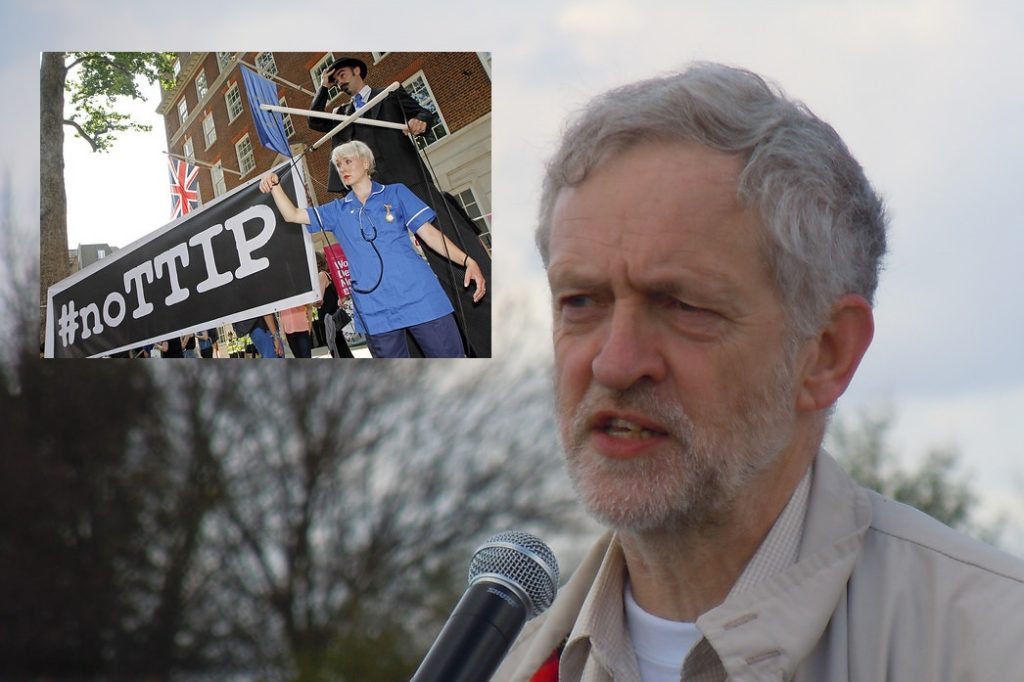 Jeremy Corbyn has joined forces with a number of Tory MPs to propose a cross-party amendment to the Queen’s Speech on 25 May. The amendment is also understood to be backed the SNP, and seeks to exempt the NHS from the controversial Transatlantic Trade and Investment Partnership (TTIP) deal.

If successful, this unusual alliance will be the first Queen’s Speech vote to defeat a government in almost 100 years. The last time it happened was in 1924, and led to the resignation of then Conservative Prime Minister Stanley Baldwin.

Next week could turn out to very bleak for David Cameron indeed.

The amendment expresses “regret” that the current government has not included legislative provisions that “protect the National Health Service from the Transatlantic Trade and Investment Partnership” in the Queen’s Speech.

TTIP is a EU-US trade deal currently being negotiated in secret. Advocates of the deal champion it as a way of reducing barriers to trade between companies in the involved countries. In reality, however, it will essentially legislate to put the profits of corporations before the rights of people, governments, and the planet.

There is, for example, a clause in the deal known as “Investment Protection“, previously referred to as the Investor-State Dispute Settlement (ISDS). This clause allows companies to sue governments – in a secret court – if they feel politicians are unfairly limiting their access to markets by making certain legislative decisions.

State-owned enterprises, such as the NHS, are subject to competition law under TTIP. This means they too cannot be seen to be unfair to private enterprises. As it stands a “Committee on State-owned Enterprises” will be set up as part of the deal. This commitee will keep a close eye on whether the state is adversely affecting the access of private companies to these markets, or limiting the profits they could make from them.

Cameron has been repeatedly asked to insert a condition into TTIP that would remove any possibility of corporations trying to use the deal to get their hands on our public health service. He has refused, saying:

However, many critics and now this surprising cross-party coalition disagree. Labour’s Paula Sherriff, a signatory to the amendment, argues:

As a former NHS worker, I saw firsthand the damage privatization did to our health service and just how big businesses behaved when they wanted to make another quick buck out of taxpayers and patients…The danger is that this trade deal will not only make it easier for them but stop us ever reversing it.

Sherriff has a very valid point. Successive governments have opened up the NHS to privatisation, with the current government accelerating this massively. With so much of the NHS already in private hands, any attempt by future governments to return them to public ownership could face a very serious battle under TTIP. And refusing to hand over more of this ‘state-owned enterprise’ would likely be met with fierce opposition from private interests. This is why organisations like the union Unite have recommended the following:

We consider the solution to the problems with TTIP poses to the NHS, and which is likely to provide the greatest protection – is for the NHS to be excluded from the agreement, by way of a blanket exception contained within the main text of TTIP.

If Cameron really believes TTIP is no danger to – and will have no affect on – the NHS, creating a blanket exception for it in the deal should be a no-brainer. His determination to ensure the NHS is subject to the TTIP agreement proves that it’s there for a reason.

His argument is easily derailed and so too, it seems, is his government. Around two dozen Tory MPs are said to back the amendment exempting the NHS from TTIP. But with Cameron’s majority in parliament being so slim, this is enough to defeat his proposals.

The Tory government is in power by the skin of its teeth, and the splits within the party over Brexit are seriously testing loyalties. Some Conservative MPs appear to be grabbing the resulting rebellion by the horns and running with it. And thankfully, they’re aiming for the right target.

If this Queen’s Speech amendment succeeds in removing the NHS from this toxic trade deal, it will be a cross-party effort felt across the whole country. And it will send a clear message to corporations that when we say ‘hands off our NHS’, we mean it.

Take action against TTIP with War on Want.

Write to your MP to encourage them to raise concerns about the trade deal.