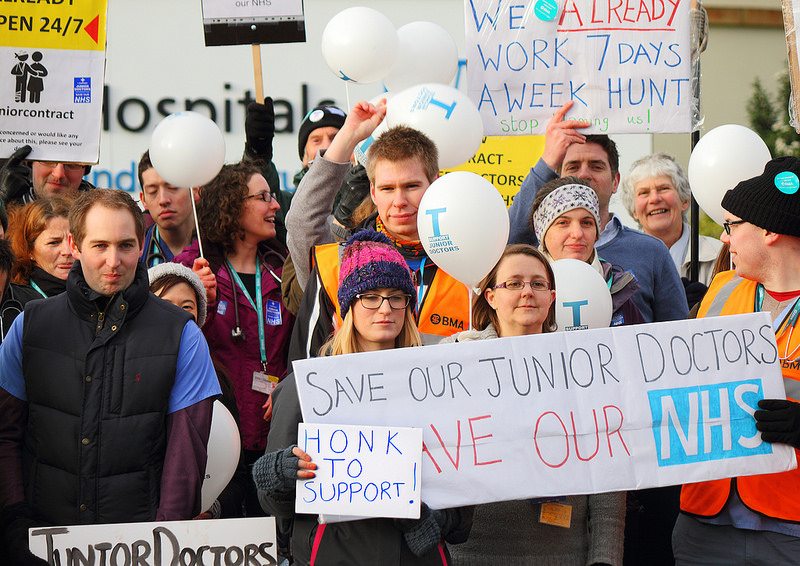 In June a referendum will be held on the newly negotiated junior doctors’ contract. At that point doctors will have a free vote on whether they accept the terms of the contract or not.

However, a suspiciously timed leak has just hit the headlines which may make them think twice about turning down the current offer.

The UK government must be delighted.

The leak is a trove of private WhatsApp messages by the Junior Doctors Commitee (JDC). It covers the period of November 2015 to May 2016, which were some of the most heated months in the contract dispute.

Many media outlets seized on the story immediately, claiming the messages prove that junior doctors aimed to drag out the dispute as long as possible. This assertion partly rests on a message by JDC chair Dr Johann Malawana, who wrote:

The best solution may actually [be] to draw this right out. Into the Europe debate and leadership debate. Punctuated IA [Industrial Action] for a prolonged period and force them to impose against our support.

His “solution” was suggested after talks stalled towards the end of last year. By this stage, the fear of imposition was already circulating and industrial action had been almost unanimously approved by doctors. In a climate where the government appeared unshakeable, ‘drawing it out’ would provide time for it to reconsider that position – as it eventually did – and highlight the steadfast attitude of the doctors on the issue.

Forcing the government to impose the contract would also open up legal routes to a challenge – which also happened – and strengthen the doctors case.

Strategically, these are genius moves. They are solution focused, and they have worked. But they are not tactically aimed at creating an endless industrial dispute with the government, despite what the mainstream media would have you believe.

Much attention has also been paid to a comment by Malawana regarding a round of talks in January. Allegedly, he branded the talks as “rubbish”, but suggested doctors should be involved in order:

to play the political game of always looking reasonable

Reports suggest that this was a cloaked attempt to cultivate the image of the doctors in the dispute. But commentators fail to point out that it would have been fatal not to do so. The British Medical Association (BMA), and the doctors it represents, were squaring off against the most seasoned of political game players: the government. They have also been the subject of brutal treatment at the hands of the media, which is the puppeteer of public opinion.

Not paying attention to their image in the public eye would have been suicidal. They should be commended for that awareness, not condemned.

A further bone of contention is the discovery in the messages that doctors were concerned about pay. Shock, horror. The media seem to have forgotten that this has been a part of the dispute all along, it’s just not the only concern.

This leak, and the resulting reporting, appears to be another attempt to smear the junior doctors. And it’s not surprising when the Editor of the Health Service Journal, who published the leaks, has an obvious bone to pick with them for “refusing to talk” with his publication.

Let’s hope the junior doctors see it for what it is, and place their vote in the referendum based on what is best for the NHS, themselves and the public. Not because this particular witch hunt has branded them as agitators.

The real role they play in our society proves they are anything but.

Get up to date with the junior doctors contract on Twitter with #JuniorDoctorsStrike.

Support The Canary so we can continue to challenge the mainstream media narrative.