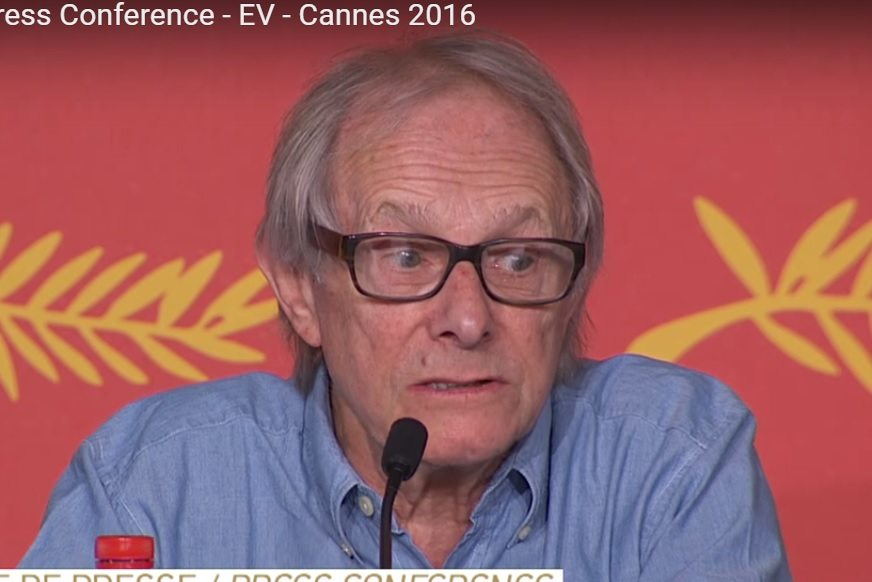 TV and film director Ken Loach has a long and dignified record of sticking it to the man, criticising social injustice ever since he started out in the 1960s. Now, he’s stuck it to the BBC, whose Today Programme told him that government welfare cuts had “huge public support”.

On 22 May, Loach won the Palme d’Or – the top prize at the much-respected Cannes Film Festival – for his film I, Daniel Blake. This film tells the story of a middle-aged widower who’s no longer able to do his job after having a heart attack, but who finds his benefits stopped regardless. In essence, it’s a scathing critique of the callous changes made to Britain’s benefits system under the Conservative government in recent years. No wonder Ed Vaizey, Minister of State for Culture, Communications and Creative Industries, could only muster up the following lukewarm and unenthusiastic comment on Twitter, mentioning neither the film nor Loach himself:

Having also won the prestigious Palme d’Or back in 2006, Loach is now the first British director ever to win it twice.

Talking to the BBC’s Today Programme on 23 May about winning the award for a second time, Loach called the current benefits system in Britain a “cruel bureaucracy”, and said:

We have to look again at this whole cruel sanctions and benefit system which is out to tell the poor that their poverty is their own fault, and if they don’t have a job it’s because they’re incompetent or useless… This is really unacceptable, isn’t it?

But presenter Sarah Montague didn’t answer quite as Loach might have expected, arguing:

Of course, there is huge public support for what the government has done. The polls suggest that there is very strong popular support not least for the benefit cap…

Before she could continue, Loach quickly interrupted her, saying:

Maybe because people listen to the Today Programme too much.

With this absolute zinger, he stopped her in her tracks, before explaining:

If you had to get out amongst the people who are in the food banks, who are supporting those who are there – people who would not eat unless there were people providing charity, who have to choose between their heating and their food – I think you’d find that there’s a great disgust and despair that we live like that in this country now.

Listen to Loach’s full comments on the Today Programme here:

At the winners’ press conference, Loach spoke about the impetus behind I, Daniel Blake. He said:

the thing that we tried to do is to say what things are like, because it not only breaks your heart, but it should make you angry

In a context in which the gap between the life expectancy of rich and poor citizens is rising for the first time since the 1870s, Loach made it very clear whose side he is on:

There is a conscious cruelty… throughout Europe there’s mass unemployment and in Britain there’s two million known unemployed but in reality four million. And the most vulnerable people are caught, disabled people are caught… It is deeply shocking that this is happening… the heart of it is a shocking, shocking policy.

Why Loach is still going strong

On the one hand, it’s a shame that Loach is still having to make his films criticising societal ills. In the five decades he’s been making films, we might have realistically hoped to eliminate poverty and social injustice from Britain once and for all.

On the other hand, we can count ourselves incredibly lucky that we still have such a prolifically principled advocate of a more humane society making cutting social critiques and putting Britain on the map for all the right reasons.

And maybe Loach was completely right when he slammed Montague’s comments. Perhaps we are listening to what the establishment media says too much. Maybe we should instead go out into our communities more and fight to make them better places for all of us to live in.

I, Daniel Blake will be released later this year.

– See other films made by Loach here.

– If you haven’t yet seen Loach’s powerful film ‘The Spirit of ’45’, see the trailer here.