With an expert one-liner, this NHS worker just slammed the government on BBCQT (VIDEO) - The Canary 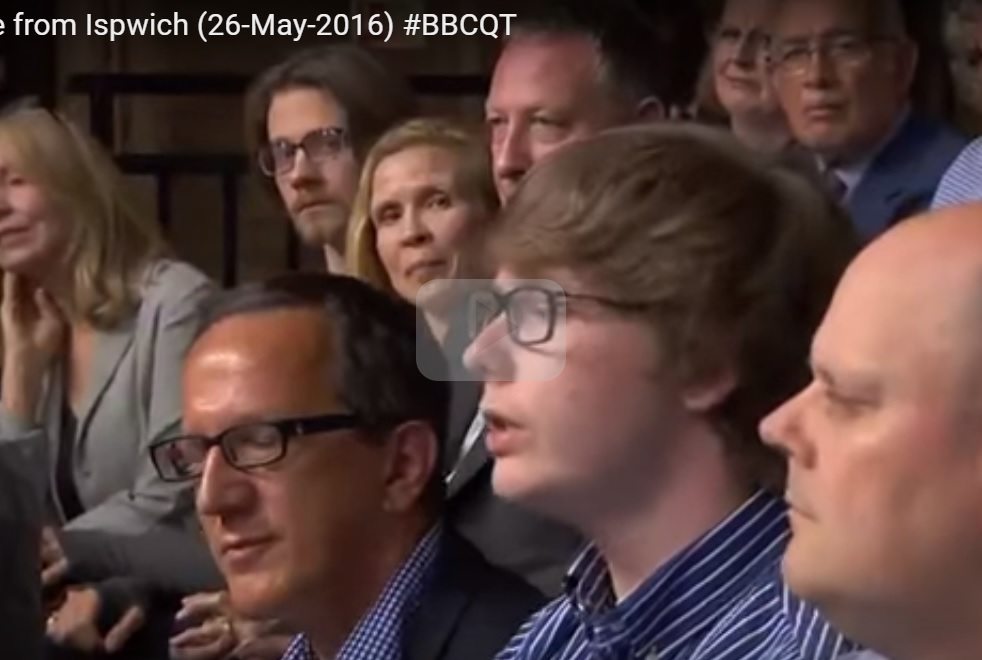 As has now become custom, BBC Question Time on 26 May was dominated by the EU referendum debate. This edition focused on the difficult and polarising question of immigration. But one NHS worker in particular made sure he brought the most important issue to the fore.

On the same day, the Office for National Statistics released estimates suggesting that net migration to the UK in 2015 had risen to 333,000 – the second highest figure ever. And although the BBC has insisted that “EU immigration is relatively stable”, and that other countries in Europe are actually taking on many more refugees than the UK, it was no surprise that this issue became the main focus of Question Time.

One of the arguments made by supporters of the ‘Leave’ campaign on the programme was that Britain’s public services are being overwhelmed by migrants.

But one NHS worker spoke out about what he considered to be the scapegoating of migrants. And with an epic one-liner, he deftly refocused the blame for the current difficulties in the National Health Service, saying:

The NHS is struggling because of the Conservative government cuts made to the NHS, not because of immigration.

There are 250,000 people from the EU propping up our schools, and our hospitals, and our social care system.

The BBC, meanwhile, has pointed out that both EU and non-EU migrants tend to pay more in taxes than they receive through government spending.

The real pressures on the NHS

The truth about today’s problems in the NHS is that Chancellor George Osborne has tried to cut NHS funds without Britain realising it. Appropriate funding is currently a massive concern for the NHS. As GP and author Youssef El Gingihy has insisted, the service is currently experiencing:

But funding is not the only concern in the NHS. Many health workers feel that the government neither values nor listens to them. And this is backed up by Health Secretary Jeremy Hunt’s shambolic handling of the junior doctor dispute.

The government’s Health and Social Care Act, meanwhile, has effectively abolished government responsibility for the NHS, opening it up to privatisation. And this is on top of public money already being haemorrhaged into private pockets through the Private Finance Initiative.

In short, everything seems to indicate that the Conservative party is hell-bent not on saving the NHS, but on selling it off to its powerful corporate friends. And as the NHS worker on Question Time rightly insisted, people’s anger over the difficulties in the NHS must not be directed towards immigrants, but towards the real threat to the service – the Conservative government.

You can see the full Question Time debate here:

– See other articles at The Canary on the NHS, the EU referendum, immigration, and refugees.

– Join Keep Our NHS Public (KONP), support the campaign to prevent the Transatlantic Trade and Investment Partnership (TTIP), assist 38degrees in its campaign to mobilise support for public healthcare, and see the six steps that need to be taken to save the NHS here.

– If that’s not enough, why not join the Refugees Welcome campaign, back the efforts of Action for ESOL, sign this petition, support the City of Sanctuary projects, and write to David Cameron and your MP to ask them to do more to support refugees.