The death of a young Tory activist, and the toxic trail to the election fraud scandal - Canary 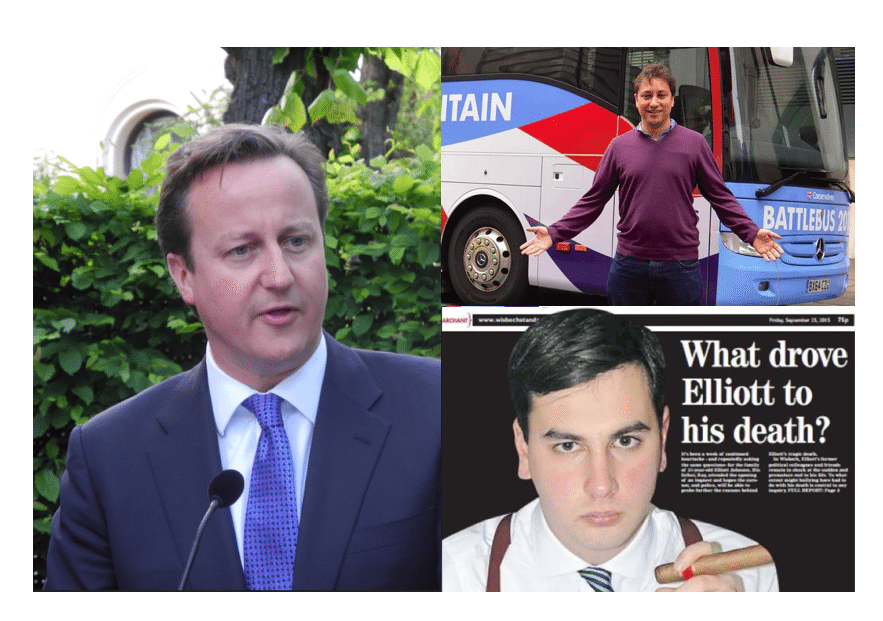 An inquest opened today, into the death of a young Conservative activist who participated in the party’s infamous RoadTrip 2015 campaign – now under rigorous investigation as part of a major election fraud scandal. Today we follow the toxic trail between these two seemingly separate, but tragically interwoven tales.

Last September, the body of 21-year old Elliott Johnson was found on railway tracks in Bedfordshire. A suicide note left behind described the cruel and systematic bullying campaign which helped drive him to his death.

The man Johnson names in his suicide note is Mark Clarke. Mr Clarke happens to be the senior aide behind the Conservative party’s RoadTrip 2015 battle bus campaign. Johnson came into contact with him as one of many young Tory activists bussed into marginal constituencies to turn the vote blue.

As we now know, this campaign formed part of a potential network of fraud – with the battle buses, the activists and many lines of expense allegedly left unreported, in order to breach spending limits. In short, the Conservative party stands accused of winning the 2015 general election by breaking the law.

Johnson’s death reveals that not only was the campaign potentially fraudulent, but conduct by those spearheading the campaign brings shame upon the Conservative party too. Drugs, sexual assault and harassment, blackmail, and outright thuggery; just a handful of the accusations aimed at Clarke and his team during the campaign.

Conservative Prime Minister David Cameron shared a platform with Mark Clarke in July 2015, and credited him and the campaign with the surprise victory for the party.

But things turned sour fast. Soon, more than 25 complainants approached CCHQ with allegations about Clarke.  As the Guardian reported:

Among the allegations…was a serious one of blackmail made by a Tory activist.

The 20-year-old, who wishes to remain anonymous, made a complaint to the party about Clarke’s behaviour after he allegedly pinned the man’s girlfriend to the wall during a Road Trip 2015 night out.

Three months later, the activist was befriended on Facebook by a French woman who quickly contacted him on Skype, stripped in front of him and persuaded him to perform a sex act. Soon afterwards he received a demand via Skype for €3,500 (£2,500) and was told that if he didn’t pay it the film would be posted on Facebook.

The demand was received four days after he went to CCHQ to give evidence against Clarke. “I was pretty distraught,” he told the Guardian. “Pretty annoyed at myself for letting it happen to me. It was a rough day.”

Johnson wrote a critical blog about his time on the campaign, featuring a photo of Clarke, for the rightwing pressure group Conservative Way Forward (CWF). Consistent with the allegations in the prior blackmail case, Clarke moved against his accuser.

The so-called Tatler Tory Clarke, and fellow Tory aide Andre Walker, cornered Johnson in a Westminster pub, where Johnson claims they berated and bullied him with threats for over an hour before he could make an escape. Soon after, he was approached by the men again, but this time he filmed the exchange secretly. A transcript from the secret film details the threats piled onto Johnson by the two men.

AW: ‘You [EJ] behaved disgracefully! You’ve taken a cardinal rule and stamped all over it! They [names two senior Tory enemies of Clarke] are c****.’

EJ (to MC): ‘It was disgraceful to attack me in the pub.’

MC: ‘I was disappointed you were telling lies about me. People in the Conservative family should be fighting the enemy, not each other.’

EJ: ‘Until the virtual beat-up in the bar, I wasn’t go to do anything. You bloody well need a kick up the a*** for doing that kind of stuff to people. CCHQ [Tory HQ] don’t like you.’

MC: ‘What do you know about other complaints?’

EJ: ‘Every man and his dog knows… in a generic sense.’

MC: ‘People are putting complaints about me and adultery?’

MC: ‘Did [names two other Tory foes] encourage you to complain?’

MC: ‘You can’t put toothpaste back in the tube. Politics is a long game. Be careful about making irreversible decisions.’

EJ: ‘My mistake was getting involved.’

MC: ‘Are you desperate for a job for rent and stuff? Savings? Parents?’

MC: ‘Have you told the Commons authorities about your caution?’

EJ: ‘Robert Halfon [Tory deputy chairman] said it’s no problem. It’s weird you saying, “We know you have this [problem], we’re going to tell the Press”. I don’t appreciate tactics like that – and I doubt it’s the first time you have done it.’

AW: ‘For f***’s sake… You’ve ended up running down a road you don’t want to be on. People have been let down.’

Johnson sent the exchange to his seniors at CWF, and to CCHQ, telling them:

“People began to notice Mark shouting at me,”

“I was genuinely fearful that he would start to attack me.”

He added that Clarke had threatened to “destroy my career in the Conservative party and journalism.”

But following his letter, Johnson’s worst fears were confirmed. He was suddenly made redundant from his post at Conservative Way Forward. His exchange with Clarke was cited in his notification letter.

“Further to your email exchange with our HR consultant, I was asked to review our operational requirements to establish your ways to limit your exposure to an external individual following an incident you described which occurred on 12th August 2015. As part of the exercise I have identified that there is a diminishing need for a dedicated political editor for CWF and therefore it is with regret that I write to notify you that your role is at risk of redundancy.”

A month later, Johnson killed himself.

“Elliott was not a depressive boy,” Johnson’s father Ray told The Mail on Sunday. “He was subjected to a long and nasty campaign of intimidation in the Tory Party, yet nothing was done.”

The Conservatives may now be ruing their failure to deal with Clarke, or their acceptance of him as a necessary evil in their hunger for victory in 2015. Former party chairman Grant Shapps already fell on his sword, but the story did not end there as Cameron might have hoped.

Instead, Cameron’s Conservatives have become the first government in UK history to face investigation by the police for electoral fraud. As investigations continue to pile up evidence of the alleged fraud, this case may well topple Cameron, leading to a fresh general election which would leave the party in tatters. All triggered by a young life, snuffed out too soon.