Corbyn comes out fighting for a Labour 'Remain' vote, he didn't mince his words - Canary 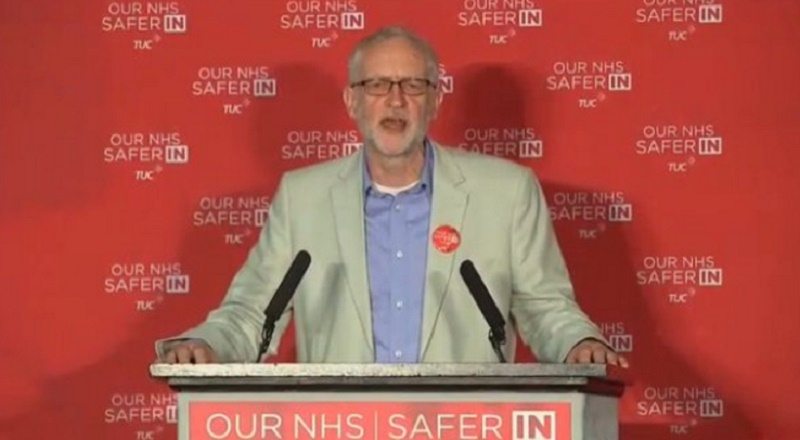 Labour leader Jeremy Corbyn assembled his Shadow Cabinet on Tuesday – and came out fighting for a Remain vote in the EU referendum. To say he was unusually robust may be an understatement.

Flanked by his team, members of Labour’s National Executive Committee (NEC) and trade union bosses, Corbyn did not mince his words. He urged all Labour supporters to get behind the Remain campaign and vote to “Stay In”:

This is the Labour movement saying that we are voting to remain in the European Union, next week

Delivered from central London at an ‘Our NHS: Safer In’ event, his overarching speech appeared to seek to reassure those on the left who have doubts about the EU, and its democratic accountability.

Regarding the Transatlantic Trade and Investment Partnership (TTIP) he said that it would be better if the UK remained in the EU and fought the controversial deal from within.

He also sought to alleviate any fears people may have regarding the NHS:

I would not be voting for Remain if I thought there was any risk whatsoever to our NHS […] The NHS, our national health service, is Labour’s proudest creation.

Attacking what he called “this awful fight with the junior doctors”, Corbyn said the NHS was in crisis, and:

That crisis would be even worse if many on the Leave side had their way. People who have argued against the NHS and free healthcare on demand in principle. These same people now have the audacity to portray themselves as the saviours of the NHS. Most of the Leave side – the Tory right and Ukip – don’t even want there to be an NHS.

He also called for the NHS to be excluded from TTIP. The fact he has not called for an outright fight against the deal may trouble many, as it is seen by some as a corporate and undemocratic assault on Europe.

The fact he also cited Tory MP Dr Sarah Wollaston in this argument, saying “she feared what would happen to the NHS if we left what she called the ‘Brexit penalty'” may not have been a wise move. Criticism surrounding her from the junior doctors has been rife.

However, a change of tone was noticeable when he referred to economic claims made by the Leave campaign:

The Vote Leave bus said “we send the EU £350m a week, let’s fund the NHS instead”. There’s a couple of problems with that, firstly the UK Statistics Authority says that slogan is “misleading” and told them to stop using it. […] It’s an outright lie, and they know it. And they’ve since been forced to re-paint the bus.

“Outright lie”, from a man renowned for his generally calm and mild-mannered enunciation, was strong stuff. But it became stronger still:

Does anyone really believe that those from the hard right of the Tories and Ukip would spend any extra funds on the NHS? Nigel Farage and Boris Johnson really are wolves in sheep’s clothing, using this concern for the NHS to mask their real agenda.

You could almost sense the collective intake of breath from the assembled journalists – but Corbyn is correct. As The Canary reported today, the wildly varying claims surrounding exactly what any extra money (if there is any) will be spent on are not to be trusted. Remember – Boris Johnson is a man who’s changed his mind so many times on the EU he must have a wardrobe full of flip-flops.

Corbyn also used the NHS to take a swipe at the anti-immigration rhetoric currently spewing from the Leave campaign, saying:

Let’s be honest, they [the Tories and UKIP] love the NHS in the way that Dracula loves a blood bank […] So do we trust the leaders of the Leave campaign to have the best interests of the NHS at heart? Not on your life. I can sum them up in just three words. Fibbers, fakes and phonies.

Overall, the change of tack, tenacity and tone from Corbyn today was marked. There have been many criticisms in recent months that he and his team have been less than enthused with the EU referendum. But that charge could not be levelled at him today.

This also has echoes of the Scottish Independence Referendum – when the “Yes” campaign took a lead in the polls and Cameron had to rely on Labour to “save his bacon”. Ahem. That, however, proved disastrous for Labour in Scotland, as the 2015 general election showed.

But Corbyn appears to have put enough water between his argument and that of the Tories this time to alleviate that problem.

In summing up, Corbyn said:

That’s why we’ve come together here, today. To share our values, share our determination and share our strength. And we urge all of our supporters: think very carefully about this and vote to Remain next Thursday, on the 23rd.

Will Corbyn’s intervention be enough to sway both Labour supporters, and the public more widely?

Current polling has Leave ahead. Time will tell.

What can be deduced is a very unsubtle change of tactic from Corbyn and his camp. Jeremy the Fighter has arrived.

But is he here to stay?

Remember to vote on Thursday 23 June!