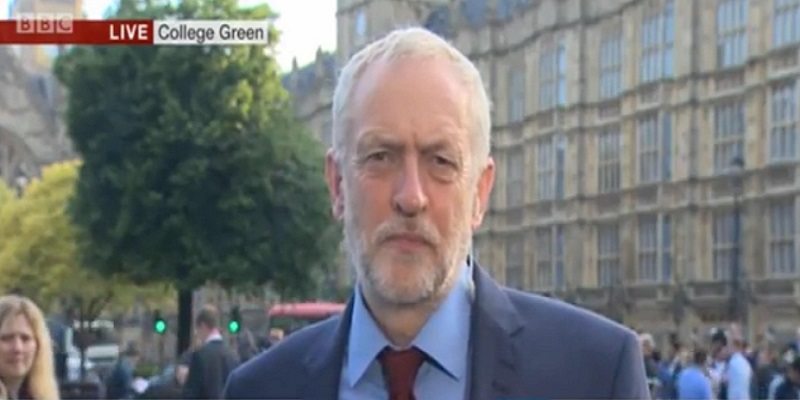 It seems that those in the Labour party who want Corbyn out are wasting no time in making their intentions clear. On Friday morning, an official no confidence motion was submitted to the Chair of the Parliamentary Labour Party (PLP).

It follows the shock EU referendum result which saw the “Leave” campaign win with 51.9% of the vote – a majority of 1.2 million.

The motion was issued by MPs Margaret Hodge and Ann Coffey. The BBC reports that:

The motion has no formal constitutional force but calls for a discussion at their next PLP meeting on Monday.

However, this may not be entirely the case. While two MPs issuing such a motion is irrelevant, if 40-50 MPs then got behind that motion, Corbyn could be in real trouble. As LabourList states:

In the Labour Party rulebook, this is the only official way to remove an incumbent leader. If 20% of Labour MPs (currently 46 MPs) nominate a willing candidate to stand against the leader, a leadership contest is triggered.

An official motion of no confidence by two MPs could be the first step down this path – and other members of the party have already expressed their disquiet.

Jeremy Corbyn has got to take responsibility. He should consider his position. He’s shown insufficient leadership.

Another anonymous MP told The Independent that “there was also a failure of Labour leadership. If we had campaigned better, we could have got another half a million votes for Remain.”

This comes on the same day as New Labour stalwarts Tony Blair and Peter Mandelson also came out to attack Corbyn, with the former saying that “Let me be frank here, I think the leadership of the Labour party was pretty lukewarm in its support for Remain”. Blair then went further, dismissing Corbyn’s notion that successive governments were to blame for a Brexit, saying:

One of the things that I heard from Jeremy Corbyn earlier today is this notion that successive governments have let down the people in some of the Labour areas that are voting Leave. We invested massively in those areas; we introduced things like the minimum wage, we introduced and signed up to the European social chapter.

Mandelson also weighed in. He said:

I feel that we could and should have done so much more, particularly as the Labour party, to sort of join up the dots for people, to explain what the consequences would be, what the negative impact would be on jobs and pay packets in the North East in so far as we didn’t do that well enough, we politically in the Labour party have to take responsibility for that. The Labour Party just did not pack a strong enough punch in this campaign. Too many voters did not listen to Jeremy Corbyn or did not understand what he was saying.

He also conveyed his dismay at Corbyn to various news reporters. He asserted the leader’s communication was “too weak“; that “He seemed to be travelling through the entire referendum with a handbrake on” and, when asked if Corbyn had delivered the right message, Mandelson said “it’s more a question of his competence”.

All this comes as The Huffington Post publishes an internal Labour “script” for MPs to use when being interviewed, which instructed them to say “Corbyn led from the front”.

But will these calls for Corbyn’s resignation or ousting actually gain any traction? And furthermore, will the membership allow it?

There have been rumours of a coup circulating since just minutes after Corbyn was elected in September last year. It is not a secret that he has struggled to garner the support of vast areas of the PLP, with many finding him weak and ineffectual – but moreover, disagreeing with his policy stance.

However, Labour party membership has rarely been higher. Estimates put it at over 388,000 – with over 200,000 joining since the last election. Furthermore, a study by YouGov found that a staggering 72% of members backed Corbyn, with only 17% disapproving.

Already, a petition has been launched entitled “A vote of confidence in Jeremy Corbyn after Brexit”. If the PLP think the membership will just roll-over, then it appears they are sorely mistaken.

Furthermore, with the country seemingly in collective turmoil over the result, UKIP claiming this as a “new dawn” and the SNP already tabling a second independence referendum, the broader left now needs, more than ever, strong, effective leadership.

For the Progress, Labour First and other factions of the party to attempt a coup at this stage would not only be wholly against the wishes of the membership, it would fundamentally stick two fingers up to a country teetering over a precipice, staring terrified into the chasm of the unknown.

Labour must not make this mistake. They now need to put their ideological differences aside, and get to work.

Because the task ahead is, in no uncertain terms, a gargantuan one.