Brexit shows the nation is deeply divided, and the truth no longer matters - The Canary 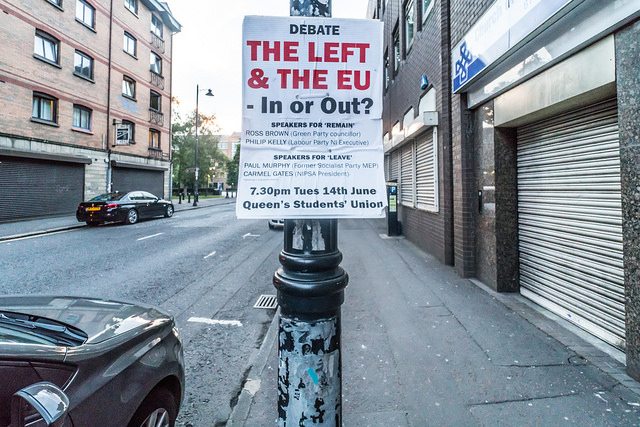 As the result of the EU referendum slowly sinks in, many in Labour will be asking – why did so many of their traditional heartlands vote to Brexit? And what, if anything, should the party learn from this wholly unexpected result? Those calling for Corbyn’s resignation, however, are wholly misguided.

The overall result was that the “Leave” vote won with 51.9% of the vote – or a majority of over 1.2 million. But break the result down by country, region and county, and the analysis provides some worrying trends.

Scotland was completely clear-cut, with 62% of the electorate voting to remain in the EU. As The Canary reported, this has already signalled a move by First Minister, Nicola Sturgeon, to say a second independence referendum is “back on the table”. This was inevitable, as the SNP has always said that if they were forced out of the EU by the rest of the UK, then these wheels would be put into motion.

Wales appears to be not so clear-cut. While a narrow 52.5% registered a leave vote, five counties including Gwynedd and Ceredigion recorded remain majorities. With Plaid Cymru now the second largest party in the Welsh Assembly, whose integral message is one of independence, they face a dilemma. With a population who have just voted to leave the EU, it is unlikely they will have the mandate (in the foreseeable future) to even consider tabling a referendum as an option.

Northern Ireland is probably the most troubling aspect of the regional impact this referendum has had. With 55.8% voting to remain, they too are essentially being forced out against their will. With the power-sharing executive split between the Democratic Unionist Party and Sinn Fein, there may well be a tinderbox sitting, waiting to be lit. It is essential the UK government immediately take measures to ensure that the animosity between both sides does not become any more toxic. There simply cannot be a return to the troubles of the past – which is a distinct possibility, considering there will now be an even stronger border between the Republic and its annexed north.

But the most complex results were to be found in England.

England voted to leave by a majority of 54.3% – but the regional variations were staggering. London, as expected had the lowest number of “Brexiteers” at 40.1%, while the West Midlands had the highest at 59.3%. The East Midlands and the North East both polled above the 58% mark, and Yorkshire and the Humber came in just under that figure.

This is the overall picture, via BBC News: 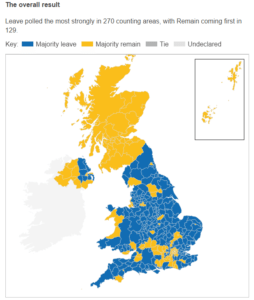 But dig deeper, analysing individual counties, and it becomes apparent that the Remain message that Corbyn was delivering has fallen on deaf ears. The ears, furthermore, of some of the party’s traditional heartlands.

Take Durham as a prime example. It is made up of six parliamentary constituencies who all returned Labour MP’s in last year’s general election. The County Council has a Labour majority of 96 councillors, then with 15 from an independent group, nine Liberal Democrats and four Conservatives. UKIP councillors? None. Zero. Zilch.

Durham has always been a traditionally strong Labour heartland, with a long and committed history to the movement. You only have to look towards the Durham Miners Gala every year to realise this. A huge gathering of the left-wing, attracting countless union leaders, left-wing speakers, MPs and, more importantly, lay trade union members and activists. This county is Labour to the core.

So what went wrong? Why, in the beating heart of Labour territory, did people ignore the party’s message?

There are a myriad of factors involved. The EU referendum, for one, has been thrust upon the public in a matter of months. An opinion poll for the Guardian just before the 2014 European Election showed that just 11% of the electorate knew who their MEP was. Furthermore, as the Observer said, this was against:

Furthermore, only 43% thought that the EU was important in relation to the way the UK is governed. Essentially, the majority of the population have been forced to go from a stance of not really caring, to suddenly having to care – all in the space of four months.

Research by the Electoral Reform Society showed that in March of this year only 16% of people felt “well informed” about the EU referendum. By the week of the referendum itself, this figure had only moved to 31%. The public have been forced, in no uncertain manner, to make a decision about one of the most complex institutions in the world and our relationship with it. In 16 weeks.

But the situation in Durham, specifically, must run deeper than this. If you want a prime example of why the electorate maybe chose to “Brexit”, the image below may be a starting point. 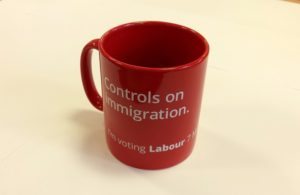 Angela Eagle summed up the problem last night, except it dawned on her about six-years too late. “This is post-truth politics” she commented. This statement essentially refers to the era we live in now – where the lines between the truth and a lie become so blurred that the public is unaware of the difference. But this has been brewing for years – and the previous Labour opposition need to take some responsibility for the situation we see ourselves in today.

They peddled such a fine line between a centre-left and a centre-right agenda, that the public (quite rightly) failed to see the difference. The “Controls on Immigration” mugs are one such example. When you muddy the waters so darkly between yourselves and your opponents, the public cannot decipher who is actually right.

It then falls to the media to advise them – and to say they have not been impartial in all of this would be an understatement. With the Sun calling refugees a “swarm” one week, then urging us to donate to help refugee children after the tragic death of Alyn Kurdi the next – is it any wonder the public’s heads were spun?

The only winner out of this perpetual, ideological chaos was these “post-truth politicians”. These were the ones who latched onto people’s uncertainty surrounding immigration, and their anger at austerity and the decimation of our public services, spun the two together and hey, presto. “Brexit”.

As sociologist Lisa McKenzie prophetically wrote in The Guardian on 15 June:

From my research I would argue that the referendum debate within working-class communities is not about immigration, despite the rhetoric. It is about precarity and fear. As a group of east London women told me: “I’m sick of being called a racist because I worry about my own mum and my own child,” and “I don’t begrudge anyone a roof who needs it but we can’t manage either.”

This may go some way to explaining why an area like Durham voted to leave the EU.

The county sits in the top 30% most deprived areas of the UK. When ranked by Lower Layer Super Output Area (LSOA), that is wards within county councils, it has 36 in the top 10% most deprived in the country. Furthermore, it’s claimant count for Jobseeker’s Allowance is higher than the national average and the child poverty rate is 26%. Couple this with 16,663 foreign-born residents in the area in 2011, representing 3.3% of the locality’s usual resident population – the second-highest concentration in the North East – and you have a perfect storm waiting for the UKIP flag-wavers to enter.

It would be disingenuous and frankly preposterous to level accusations of racism at the people of Durham considering their obvious left-wing tendencies. What is more likely is that they have been caught in this “Social Contagion” of fear about austerity, of jobs, of public services – and have fallen for the spin of a few snake oil salesmen. Hook, line and sinker.

The fact they also have a majority of Labour politicians both at local and national level needs to induce an immediate pause for thought. These people obviously have concerns – but it appears they have not been listened to, or addressed, by their elected representatives.

Labour, now under Corbyn, need to take a very long, hard look in the mirror. And quickly. Whatever the party has been doing for six years obviously hasn’t worked, as the electorate in swathes of its apparent heartlands have chosen to believe the lies, casual racism and xenophobia and slick bewitching of a few, opportunistic individuals.

The danger is, of course, that men like Farage continue with this charm offensive and do even more damage than they already have.

Regardless of your views on the pro’s and con’s of a Brexit, it is clear Labour have been sent another message by the public.

But, in no uncertain terms, Labour should not revert back to Blair’s “Third Way” or Miliband’s hybrid of it. Corbyn needs to be given the maneuverability and support to address this in his way – otherwise the public’s message will be lost and nothing will change.

And it’s a message they need to heed this time – before the public run out of patience repeating themselves.