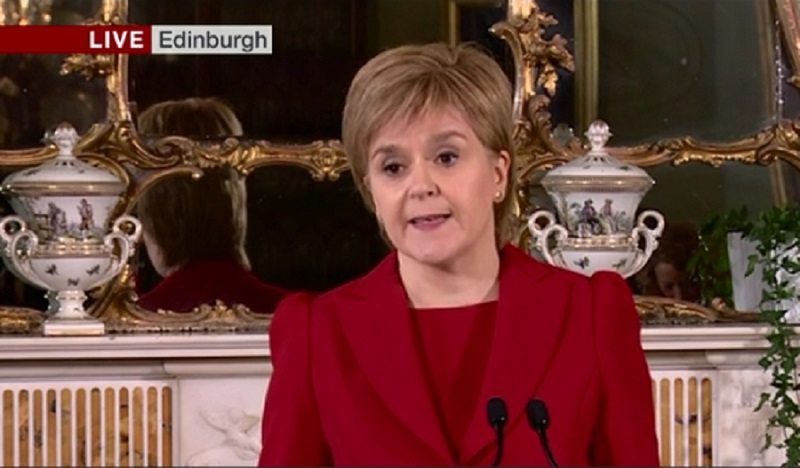 Nicola Sturgeon may have just put in motion a second referendum on Scottish independence, following the UK’s vote to leave the EU.

In a speech in Edinburgh, Sturgeon said that:

Scotland, like London and Northern Ireland, voted overwhelmingly to stay in the European Union. […] It is significant, in my view, that we did so after a campaign that was positive about the EU. Unfortunately of course, yesterday’s result in Scotland was not echoed across the United Kingdom.

She went on to say that:

The UK wide vote to leave the EU is one I deeply regret. The vote across England and Wales […] was a sign of divergence between Scotland and large parts of the UK, and how we see our place in the world.

Sturgeon went on to criticise both Labour and the Tories, for fundamentally not listening to the public, and said that the “Westminster Establishment had some serious soul searching to do”.

Scotland faces the prospect of being taken out the EU against its will. I regard that as democratically unacceptable.

It is my job now to act responsibly and in the interests of all of Scotland, and that is what I intend to do.

The Scottish Cabinet are meeting tomorrow to discuss current matters, including financial stability.

But, the crucial statement from Sturgeon was this:

The manifesto that the SNP was elected on last month said this: ‘The Scottish parliament should have the right to hold a second referendum if there was significant and material change  […] such as Scotland being taken out of the EU against it’s will.‘ Scotland now does face that prospect […] It’s a statement of the obvious the option of a second referendum should be on the table. And it is on the table.

She also said she had spoken to Sadiq Khan, Mayor of London – and the thrust was that he was also unhappy with the result. Could the London Mayor be seriously considering the position of the capital, based on the referendum result? Time will tell although it is highly unlikely.

So, could a second independence referendum actually happen? And if so, how soon?

Alex Salmond signalled less than a fortnight ago that if the rest of the UK voted to leave the EU, a second “Indy Ref” would be possible in three years:

With 62% of Scotland voting to Remain in the EU, the SNP now have a seemingly open, albeit half-ajar, door to walk through and call a second referendum.

The challenge will be whether the people of Scotland who voted to remain in the EU, feel as strongly about that as they do Scottish independence. The latest polling on Scottish independence still put a “No” vote ahead, but only marginally. Alex Salmond said this morning about the invoking of Article 50:

That sets the clock ticking. So some time over the next two to two-and-a-half years, there would have to be a Scottish referendum to see if the people of Scotland want to assert their national independence, as part of a wider Europe.

There was already a deep-seated dislike of the Westminster establishment within Scotland, even before this referendum. The very fact that Scotland is now, essentially, being forced by the rest of the UK to do something it categorically doesn’t want to, may be enough to tip the balance of an independence referendum in the SNP’s favour.

The Brexit result, that came as a shock to so many, could well signal the beginning of the end of the United Kingdom as we know it.