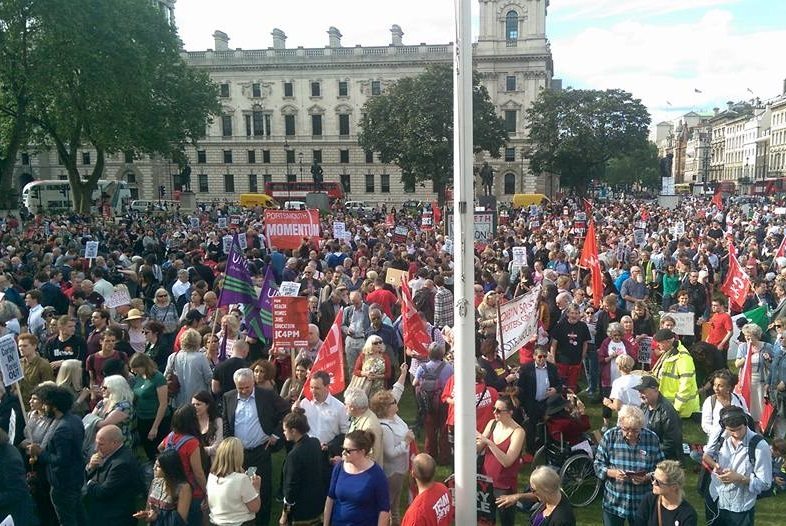 On 27 June, the parliamentary Labour party agreed to hold a no confidence vote in its leader, Jeremy Corbyn. But after this decisive meeting, a defiant Corbyn made it very clear to thousands of supporters outside the Houses of Parliament that he was going nowhere. Inspiring as some may have found the rally, at least two Labour MPs spoke about the protesters with immense contempt – referring to them as “dogs”.

Veteran MP Dennis Skinner, who made his support for Corbyn clear in parliament on 27 June, called the 10,000-strong rally in Parliament Square:

The greatest crowd since the miners won in 1974

But other Labour MPs didn’t see the event in quite the same way. Having just chosen to carry out a non-binding no confidence vote against Jeremy Corbyn (rather than a much harder formal leadership challenge), dissenting ministers were hoping their democratically-elected leader would jump ship voluntarily.

The massive rally outside parliament was just another strong sign that these figures would have to try a lot harder if they wanted to get rid of him.

Among the attempts to slander all grassroots Labour activists and Corbyn supporters — by complaining of threatening language allegedly used by some citizens on social media — Labour’s anti-Corbyn forces also spoke contemptuously about those who had rallied behind the Labour leader.

One MP referred to the protesters as animals, purportedly saying to Corbyn during the parliamentary Labour party meeting on 27 June:

those are your dogs outside

Meanwhile former Shadow Scottish Secretary Ian Murray, is quoted by The Mirror as asking the party leadership to:

call the dogs off

This is how anti-Corbyn ministers in the Labour party see democratic protests in support of a democratically elected leader, apparently.

And these are the people they were referring to so disrespectfully:

In recent days, Corbyn has lost 22 out of 30 members from his cross-party shadow cabinet, having to replace former ministers from the party’s right with allies from its left. While popular support for Corbyn on the streets has been of great value for the leader during this difficult time, Shadow Chancellor John McDonnell has given the following message to supporters:

Please don’t protest outside MPs offices. Staff feel threatened. Instead attend rallies and join the party to have your say if you haven’t already

In spite of the contempt shown by dissenting MPs towards Corbyn supporters, the Labour Leader has so far remained defiant. Speaking to the crowd of at least 10,000 people at the pro-Corbyn rally on 27 June, he said:

The parliamentary Labour party’s vote of no confidence on 28 June may have succeeded, but Corbyn has refused to step down, saying:

I was democratically elected leader of our party for a new kind of politics by 60% of Labour members and supporters, and I will not betray them by resigning. Today’s vote by MPs has no constitutional legitimacy.

At the same time, the ‘Jeremy Corbyn for PM’ Facebook group argued:

Today he lost the confidence of 170 people who never supported him in the first place… 35 MPs nominated Jeremy last year and 40 stood with him today – an increase in parliamentary support if anything… He’s going nowhere.

Over 220,000 supporters of Jeremy Corbyn have already signed a petition of confidence in him, and thousands more gathered around the country again on 28 June to make their support for the Labour leader very clear. They, and Corbyn himself, are not going to make it easy on dissenting MPs to get rid of him.