After a mindblowing display of support for Corbyn, the Labour coup just entered full panic mode - The Canary 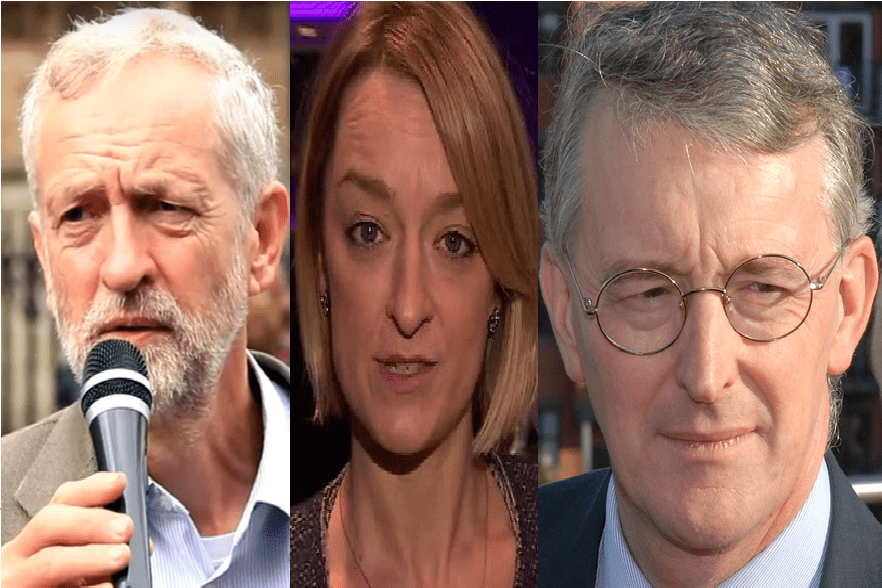 A massive show of support for Jeremy Corbyn has left the coup coalition of media pundits and disgruntled MPs with their jaws to the floor. With only 24 hours notice, over 10,000 people marched on parliament square to reinforce the Labour leader’s unprecedented democratic mandate.

Those wanting to change the Labour Party leadership will have to take part in a democratic election pic.twitter.com/bIAYB0cpwZ

Meanwhile, a vote of confidence in the Labour leader has soared to 220,000 signatures in just four days. With respect to such a democratic mandate among Labour members and the wider public, Corbyn has ruled out resigning.

Realising it will be impossible to subvert such an impressive display of support, those pushing to topple Corbyn have entered full panic mode.

Laura Kuenssberg sacrifices what little credibility she has left

In an act of sheer desperation, Kuenssberg has produced an embarrassing hatchet job on the Labour leader, riddled with inaccuracies. Continuing to abuse her lucrative public salary, the BBC’s political editor has tried to create the impression that the Labour membership is turning against him.

Her evidence? The resignation of Andy Slaughter, of whom she says, on the grounds that he called Corbyn a “comrade”:

His disquiet cannot be dismissed as the grumbling of an MP from a very different wing of the party.

That’s enough for Kuenssberg’s journalism – use the word “comrade” and the two are allies. But actions speak louder than words. Here’s a series of reasons Slaughter is politically at odds with Corbyn and progressive politics:

Slaughter’s resignation, along with the ‘revelation’ that Councillor Dave Sparks will vote against Corbyn, leads Kuenssberg to the following conclusion:

The wave of enthusiasm he built outside Parliament may be starting to recede.

If so, his confidence that he would win the likely leadership contest may prove to be misplaced.

Except polls show that Corbyn would only increase his mandate in the face of another leadership election, and this result chimes with the 220,000 strong petition and display of support outside parliament on Monday night.

Kuenssberg is shamelessly exploiting her position as a public service journalist to further her own agenda.

As Corbyn’s democratic mandate bares its teeth, resigning Labour ministers are beginning to wonder if they thought this through. One such MP is Jess Phillips who resigned from her post as Parliamentary Private Secretary to (the now former) Shadow Education Secretary, Lisa Nandy.

Panicking at such a show of support for the Labour leader at the demonstration, Phillips tweeted:

Eager to damage the leadership, she didn’t bother to fact check her assumption before tweeting. So the shadow chancellor John McDonnell calmly set her straight: 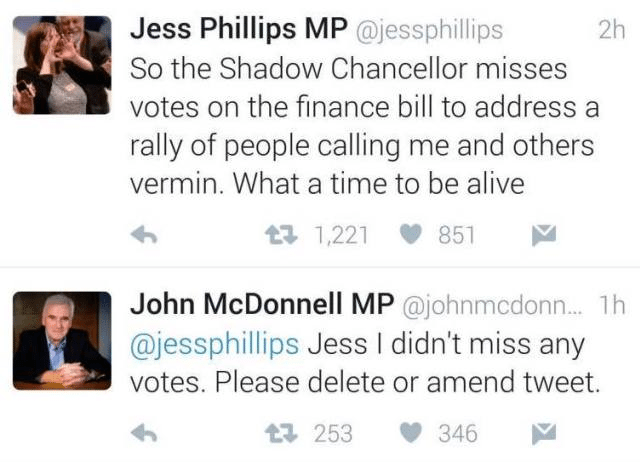 Busted. But it’s her childish and abrupt reaction to McDonnell’s polite request that betrays her true feelings: 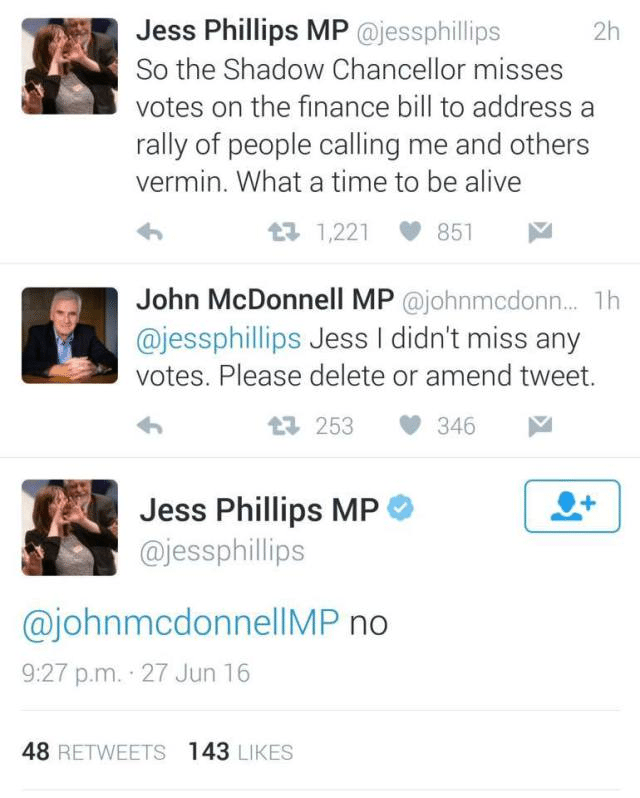 Phillips was so desperate for ammunition to use against the Labour leadership that she refused to amend a tweet that had just been publicly exposed as a lie.

After realising she could not maintain such a position, Phillips deleted the tweet and issued a retraction on her page, admitting that the original tweet was purely an assumption.

An attempt to smear Corbyn supporters wholesale, because of one t-shirt

On every Blairite’s Twitter timeline on Tuesday, you will find this:

While words that could incite violence should be utterly condemned, the idea that one t-shirt tells the story of a 10,000 strong demonstration is evidently ludicrous, but that is the impression the coup crew are trying to give. They sarcastically accompany the picture with #kindergentlerpolitics, as if this single instance contradicts Corbyn’s entire movement.

Interestingly, the women on the right in the photo is Anna Phillips, a full-time employee of the Blairite pressure group Progress. While the fellow on the left is Lewis Parker, a Blairite political commentator. Clearly, they are pretending to befriend this elderly gentleman in order to use his t-shirt to smear the entire demonstration.

The coup crew are putting their own political agenda above the interests of the Labour party. Corbyn’s tenure so far has been extremely successful:

As expected, a Parliamentary Labour Party vote of no confidence against Corbyn has now overwhelmingly passed (by 172-40). However, subverting the democratic will of the overall membership is impossible for the plotters. The result is non-binding and Corbyn will have to be defeated in a leadership election to be removed as leader.

And considering polls show another election would only increase his mandate, this coup is full of bullet-holes – and, as the desperate smears show, its supporters are beginning to realise this.